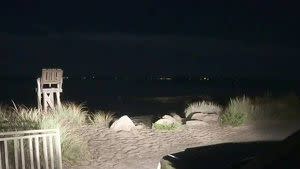 Authorities on Monday morning recovered the body of one missing swimmer as the search for a second swimmer continued after a group of people jumped off the “Jaws” bridge on Martha’s Vineyard late Sunday night, officials said.

A total of four people went into the water in Edgartown around 11:20 pm, according to the Coast Guard. Two of the swimmers were able to make it to shore, while two others remained missing overnight.

The body of one of the missing swimmers was pulled from the water around 9 am, Massachusetts State Police said. The search for the second swimmer remains ongoing.

In a statement, state police said, “The males did not surface after jumping.”

The names of those involved in the incident have not been released.

The American Legion Memorial Bridge, known for its appearance in the iconic 1975 thriller directed by Steven Spielberg, is located on Beach Road. It connects Edgartown and Oak Bluffs.

A young man who jumped from the bridge last summer had to be airlifted to the hospital after suffering a serious neck injury, the Martha’s Vineyard Times reported. Authorities told the news outlet that the man thought he was jumping from a section of the bridge that spans a deeper channel.

There were no additional details immediately available.

This is a developing story. Check back for updates as more information becomes available.