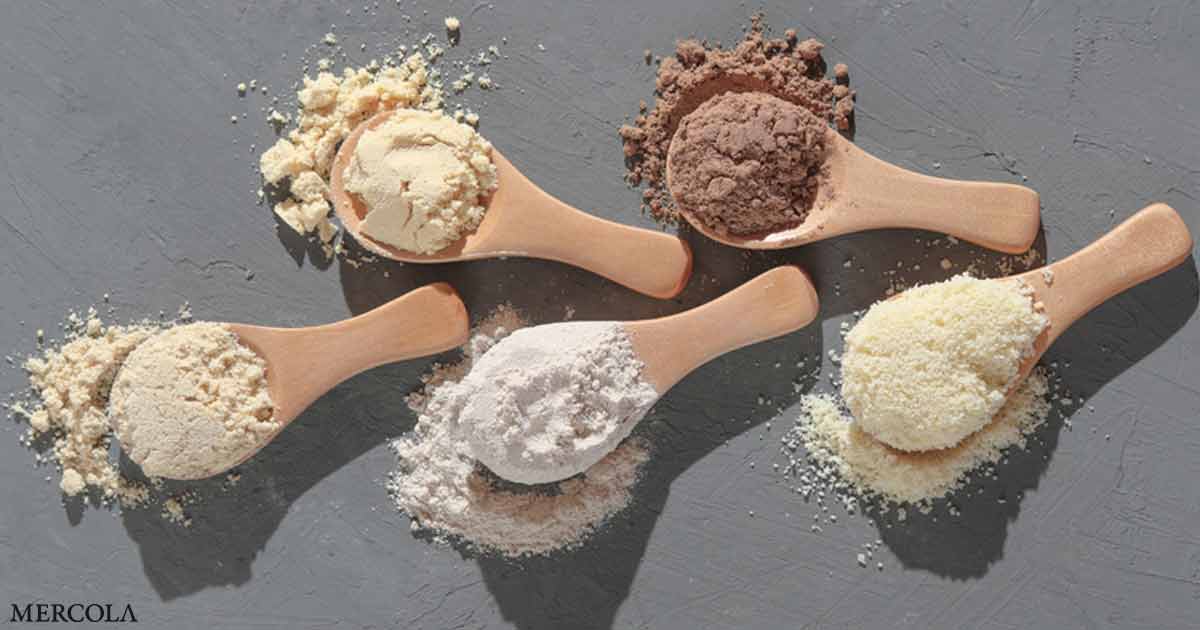 If you are still baking primarily with whole wheat flour because you believe it is better for your health, you may not be aware of the many alternative flours that exist. While some are worth checking out, there are others that are best avoided altogether, such as corn flour and soy flour, which did not make the list as they are often produced from genetically engineered crops.

Many of the 20 alternative flours highlighted below are gluten-free. If you have celiac disease, a gluten intolerance or have chosen to go gluten-free for other reasons, you are very likely familiar with some of them. Gluten, by the way, is a protein made of glutenin and gliadin molecules that forms an elastic bond in the presence of water, thereby holding bread and cakes together and giving them a spongier texture.

Gluten is a concern because it interferes with your body’s ability to break down and absorb nutrients from food. Gluten contributes to the formation of a glue-like, constipating lump in your gut that can interfere with proper digestion.

Undigested gluten prompts your immune system to attack your villi, the fingerlike projections lining your small intestine, resulting in side effects such as abdominal pain, diarrhea, constipation or nausea. Gluten consumption can also predispose you to increased inflammation, nutrient malabsorption and deficiencies and other health problems.

The six flours shown directly below are, in my opinion, the healthiest of the 20 alternative flours addressed in this article. They are low in lectins and lower in the omega-6 fat linoleic acid (LA). Rice and coconut flour are two of the lowest in LA.

Each is gluten- and wheat-free. Two of my personal favorites are almond and coconut flour. Again, you will need to experiment a bit to figure out which types of flours work best with your recipes. When in doubt, start with smaller amounts of each type of flour and adjust from there.

Two additional “flours” I want to bring to your attention are those derived from cauliflower and macadamia nuts. To me, “cauli-flour” is simply riced cauliflower that can be spiced up to make a tasty flatbread or pizza crust. You can rice cauliflower by placing pieces of raw, washed cauliflower in your food processor and blending it until it is reduced to tiny, rice-sized pieces.

If you like cauliflower, check out these delicious recipes for nutritious golden cauliflower flatbread and cauliflower pizza crust. By using cauliflower instead of grain flours in these recipes, you replace starchy carbohydrates with whole-food nutrition and cut calories, while satisfying your craving for bread.

12 Flours to Avoid if You Want to Minimize Harmful Lectins

The 12 flours highlighted below are often touted as healthy alternatives to wheat, especially when it comes to gluten-free diets, whether it be celiac disease or simply a matter of personal preference. While some of these alternative flours are considered nutritious solely based on the amount of fiber, protein, vitamins and minerals they contain, their health benefits may be overshadowed by the presence of harmful plant lectins.

Lectins are sugar-binding plant proteins that attach to your cell membranes and can be a hidden source of weight gain and ill health, even if you eat an otherwise healthy diet. Many lectins are proinflammatory, immunotoxic, neurotoxic and cytotoxic.

Certain lectins may also increase blood viscosity, interfere with gene expression and disrupt endocrine function. Because the following flours are high in lectins, I recommend you use them sparingly or avoid them entirely, especially if you have an autoimmune disease.

Using alternative flours will require patience and can be quite a challenge. If you are living a gluten-free lifestyle — either due to celiac disease, a gluten or wheat intolerance or simply as a matter of personal preference — you will need to do some experimenting to achieve your desired outcomes. The struggles and rewards of gluten-free baking come in blending several flours, adding eggs and adjusting liquids.

The biggest adjustment, however, will be in your expectations for the finished product. No matter how many techniques and tricks you use, it is virtually impossible to replicate the elasticity of gluten in most baked goods, particularly in yeast breads. In time, however, you’ll acquire a taste for denser, flatter treats made with one or more of the healthy alternative flours.

As you make a conscious choice to eat less wheat-containing foods, or perhaps to avoid wheat altogether, mainly because it is an inflammatory food, you’ll be happier and healthier. I would say the same for the alternative flours containing lectins — it’s better to avoid them or moderate your use.