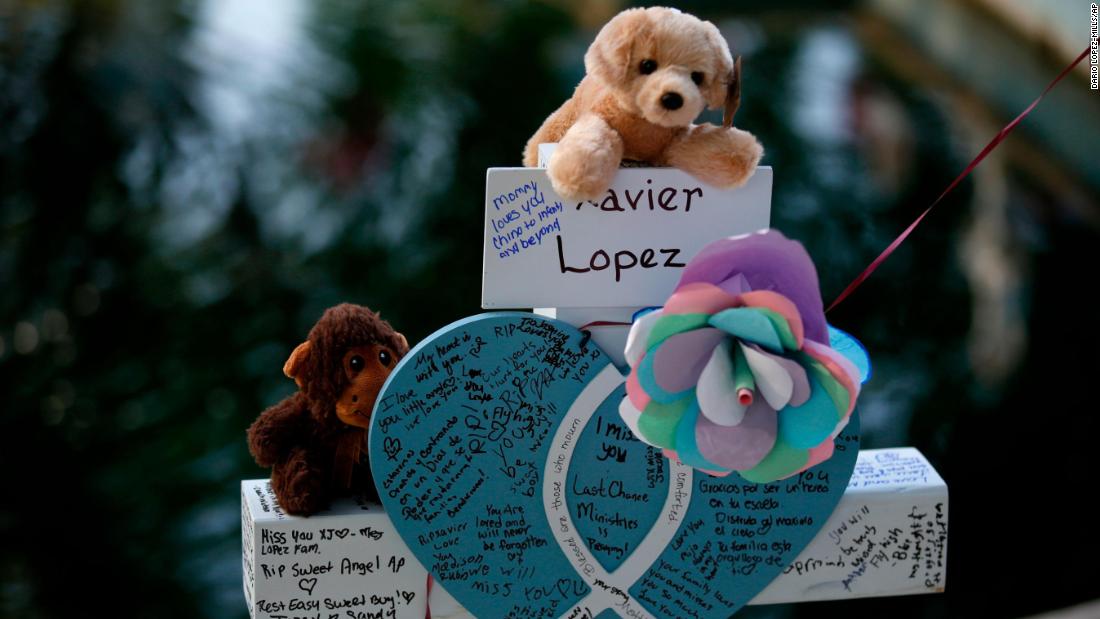 Authorities and families of the victims have released the names of the 19 students and two teachers killed in Tuesday’s shooting in Uvalde, Texas.

Nevaeh Alyssa Bravo, 10, put a smile on everyone’s face, her cousin, Austin Ayala, told the Washington Post, adding that her family is devastated.

Jacklyn Jaylen Cazares,10, was full of love and full of life, her father Jacinto Cazares told reporters. “She would do anything for anybody. And to me, she she’s a little firecracker, man.”

Makenna Lee Elrod, 10, loved to play softball, do gymnastics and spend time with her family. “Her smile would light up a room,” Allison McCullough, Makenna’s aunt, told ABC News. McCullough described her niece dela as a natural leader loved who school and was “a light to all who knew her.”

Jose Flores Jr., 10, was one of the victims, his father Jose Flores Sr. awning CNN. Flores said his son ele was in the fourth grade and loved baseball and video games. “He was always full of energy,” Flores said. “Ready to play till the night.” Flores also described his son as an amazing kid and big brother to his two siblings.

Eliana “Ellie” Garcia, 9, was among those killed, her family told KHOU. Rogelio Lugo and Nelda Lugo, Eliana’s grandparents, told the Los Angeles Times she loved the movie “Encanto,” cheerleading and basketball, and dreamed of becoming a teacher.

Irma Garcia, a fourth-grade teacher, has been identified as a victim and confirmed through a GoFundMe page. A wife and mother to four children, she was “Sweet, kind, loving. Fun with the greatest personality,” the page said, adding, “She sacrificed herself protecting the kids in her classroom. She was a hero.” Her husband, Joe Garcia, died two days after the shooting, according to family members.

Uziyah Garcia, 10, has been identified as one of the victims, his family confirmed to CNN. He was in fourth grade, his aunt Nikki Cross told CNN. His uncle, Mitch Renfro, described Uziyah as a “great kid. Full of life. He loved anything with wheels, and video games.” He leaves behind two sisters.

Amerie Jo Garza, 10, was identified by her father as one of the children killed. Angel Garza posted to Facebook early Wednesday: “My little love is now flying high with the angels above. Please don’t take a second for granted. Hug your family. Tell them you love them. I love you Amerie Jo. Watch over your baby brother for me,” said the father.

Jayce Luevanos, 10, has been identified as one of the victims by CNN through a GoFundMe site set up to raise funds for funeral expenses and family needs. Jayce’s grandfather, Carmelo Quiroz, told USA Today, the Jayce and his mother him lived with him. He said the 10-year-old was happy and loved. “He was our baby,” Quiroz said.

Xavier Lopez, 10, was identified as one of the victims, his mother Felicha Martinez confirmed to the Washington Post. “He was funny, never serious and his smile from him,” Martinez told the paper.

Tess Marie Mata, 10, has been identified as one of the victims, her sister told the Washington Post. The fourth-grader loved TikTok dances, Ariana Grande and the Houston Astros, and was saving money so that the whole family could go to Disney World, her sister said.

Maranda Mathis, 11, was identified as one of the victims, according to Uvalde’s website. Leslie Ruiz, who identified herself as a friend of Mathis’ mother, told The Washington Post that Mathis was a bright girl who was fun and spunky. She said that Maranda’s best friend was her brother, and he was also at Robb Elementary when the shooting happened.

Eva Mireles, a fourth-grade teacher, was among those killed, her aunt, Lydia Martinez Delgado, told CNN. She had been an educator for 17 years and in her off time enjoyed running, hiking, biking and spending time with her family, according to her profile on the Uvalde Consolidated Independent School District website.

Alithia Ramirez, 10, was in fourth grade and loved to draw, her father, Ryan Ramirez, told CNN affiliate KSAT. He said she wanted to be an artist.

Annabell Guadalupe Rodriguez was 10 years old, family members told CNN affiliate KHOU-TV. Her family dela told the news station that she was in the same classroom as her dela cousin Jacklyn Jaylen Cazares, who was also killed in the shooting.

Maite Rodriguez, 10, dreamed of becoming a marine biologist and had her heart set on attending Texas A&M in Corpus Christi, said her mother, Ana Rodriguez, on Facebook. Maite was “sweet, charismatic, loving, caring, loyal, free, ambitious, funny, silly, goal driven” and her best friend, she said. Ana Rodriguez wrote that her daughter loved her animals and photography and learned to sew on her own by watching YouTube videos.

Lexi Rubio, 10, has been identified by her parents as one of the victims. Felix and Kimberly Rubio celebrated their daughter making the All-A honor roll and getting a good citizen award at Robb Elementary on Tuesday, shortly before the shooting. In a text message to CNN, Felix and Kimberly Rubio said, “She was kind, sweet, and appreciated life. She was going to be an all-star in softball and had a bright future whether it’s sports or academic. Please let the world know we miss our baby.”

Layla Salazar, 11, has been identified as one of the victims of Tuesday’s shooting. Layla was an active child who loved to run, film TikTok videos and dance, her family dela told CNN. She also loved to swim in the river with her two big brothers.

Jailah Nicole Silguero, 10, enjoyed dancing and making TikTok videos, her mother Veronica Luevanos told CNN network partner, Univision. Jailah did not want to go to school Tuesday morning and asked to stay home, but Luevanos said she told her no.

Eliahana “Elijah” Cruz Torres, 10, has been identified as one of the victims, her aunt Leandra Vera told CNN. “Our baby gained her wings,” Vera said.

Rojelio Torres, 10, was also killed in the shooting, his aunt Precious Perez told CNN affiliate KSAT. The family expected nearly 12 hours to find out if her nephew dela was one of the victims, Perez said. “We are devastated and heartbroken,” she said. “Rojer was a very intelligent, hard-working and helpful person. He will be missed and never forgotten.” In a Facebook post, Torres’ mother Evadulia Orta posted a photo of her son and wrote “RIP to my son Rojelio Torres we love you and miss you.”