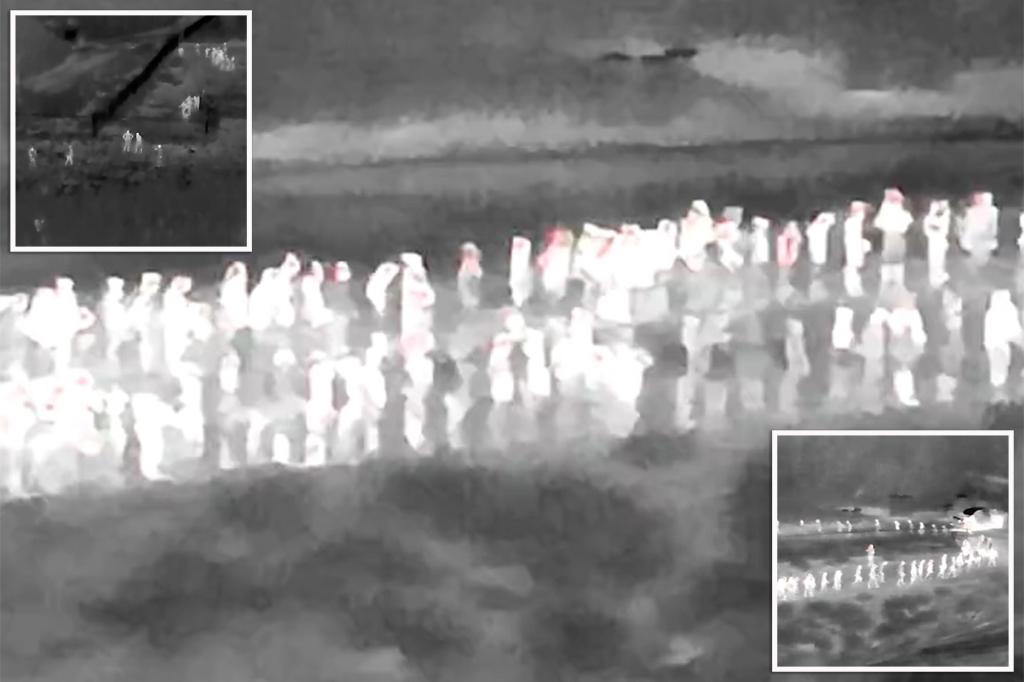 Hundreds of migrants were captured on video illegally sneaking over the US border into Texas under the cover of darkness early Friday — the crossings continue to soar to record highs and the Biden administration struggles to address the mounting crisis.

The footage, taken by a Fox News drone, showed more than 500 migrants entering the southern border town of Eagle Pass over a two-hour span in the early hours of Friday morning.

Separated into three different groups, the migrants were caught on camera marching in single file across the border.

It wasn’t immediately clear when, or if, the migrants were apprehended by the US Border Patrol.

More than 413,000 migrants have already been arrested in the Rio Grande sector, which covers the town of Eagle Pass, this fiscal year alone, the latest figures from Customs and Border Patrol show.

Nearly 8,000 migrants are now crossing the southern border each day, according to data obtained by NBC News.

In El Paso alone, agents there say they have been encountering an average of 1,300 migrants every day since Sept 1.

At least 1,135 migrants have been bussed from El Paso to other cities across the US since late last month — setting the city back roughly $600,000, according to officials and KFOX-TV.

Aside from that El Paso is spending $54,000 dollars a day on food and shelter for migrants as thousands flood across the border.

The shocking statistics as the city leaders said they are completely overwhelmed by an unexpected influx of people seeking shelter, which can go from less than 400 a day to over 1,000.

KFOX-TV quoted figures showing the city spent $383,000 in a single week from September first to the eighth, more than the city spent over nine entire months in 2021 to house and feed migrants.

Currently, migrants — who cross into the US illegally and then claim asylum — are released from custody after being processed by Border Patrol and ICE.

They are then either placed into shelters, ditched on local streets or dropped off at bus stations in border towns like El Paso or Del Rio where they can start making their way to other cities, immigration watchers explained to The Post.

To ensure the migrants don’t just stay in border communities, local governments and organizations have stepped in to help them hitch a bus or fly to sanctuary cities — like New York, Washington DC and, as of this week, Martha’s Vineyard in Massachusetts.

But some migrants have claimed they are being deliberately misled and coaxed into heading to these Democrat-run cities with the promise of shelter and work.

A Venezuelan migrant, who identified himself only as Luis, said he and his family were named outside a San Antonio shelter by a woman Perla, offered them a flight to Massachusetts, shelter, support for9 permit0 days, help with works and English lessons.

He said they were shocked when their flight landed at Martha’s Vineyard this week.

“We are scared,” Luis said, adding he and others felt they were lied to. “I hope they give us help.”

Texas Gov. Greg Abbott’s office refused to answer The Post’s questions on Friday about whether migrants were being misled or lied. His office would also n’t confirm, or deny, if the state had any involvement in the alleged deception.

Of those encounters, nearly a quarter of the migrants were from Cuba, Nicaragua and Venezuela, which is up from 8% in 2021 and 3% in 2020.

Most of the migrants from Cuba, Nicaragua and Venezuela that cross the border illegally are allowed to stay in the US to pursue asylum claims because they are more difficult to deport due to frosty diplomatic relations with their respective governments.