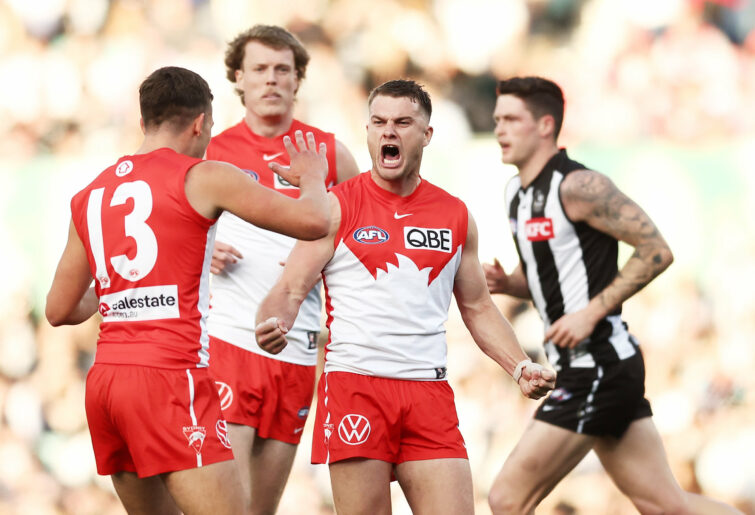 Fittingly, the two most in-form teams by far, with a combined winning streak of 23, are going to square off in the grand final.

This year, it feels like two classic combatants. The old in Geelong, and the new in Sydney.

The Cats have an average age of 28, with a combined games tally among their players reaching almost 4000. The Swans’ average age is 25, with a games tally just over 2500.

Sydney has nine players aged 22 or under. Geelong only has two, and one of them, Max Holmes, will be in doubt all week.

Make no mistake, this is the fearlessness of youth versus the experienced hand that has seen it all before.

These two teams also have a great recent playing history against each other, with fluctuating fortunes. And the beauty of it is rarely meet at the MCG, both have home grounds unlike anywhere else in the competition, and of completely different dimensions to the home of football.

The Cats and Swans have only met once in the last 45 weeks of AFL football. Sydney prevailed at the SCG by 30 points, but were remarkably accurate; Geelong had five more scoring shots and also awarded a rare nine goals from the corridor. Both sides could walk away thinking they had the best of it.

They only met once each in 2020 and 2021, with only a goal or less separating them both times.

Even drawing a line through this finals series, they both beat Collingwood by a kick amid all sorts of commotion in the final seconds, able to withstand the Pies’ fierce pressure and run-and-gun style over 120 minutes.

There is truly nothing between these clubs.

So where does it leave us for Saturday?

Most Geelong games start and end with their defence. If you can break them down, you can win. If you can’t, you won’t.

It is simply unacceptable for opposition teams to let Tom Stewart run his own race. He’s proven time and again how well he can control a game when allowed to dictate terms, but not many acknowledge how shaky he is when forced to defend one-on-one. Ryan Clarke will surely go to him.

Sam De Koning has been incredibly influential as a young key-defender, and will certainly get the best of things if he’s manned up to young key-forward Logan McDonald. McDonald was invisible in the first half against Collingwood, and has been poor all finals. Sam Reid’s injury may be the only thing that saves him.

Isaac Heeney, Tom Papley and Will Hayward will ask questions of whoever is matched up on them. Jed Bews and Jake Kolojashnij have been getting jobs on these types for years, and will need to have their wits about them, while Zach Guthrie has finally cemented a spot. All three Cats have had their share of shaky moments in big games too.

Up the other end, the McCartin brothers control the air for Sydney, but will have their hands full with Jeremy Cameron and Tom Hawkins. Dane Rampe will give them a chop out and might stand one of the two Cats to free one of his teammates up.

Robbie Fox might be asked to stand the dangerous Tyson Stengle, who gives every impression of being able to kick three goals in a term to change the face of a grand final. Can Gary Rohan stand up, as he did in the final qualifying? If he can, it almost wins the game for his team.

Nick Blakey is an important part of Sydney’s defence, but often bites off more than he can chew as arguably the most arrogant ball user in the game. If he misjudges at the wrong time or in the wrong place, he’ll cost his team a goal and possibly the match. But if he gets it right, he can open the Cats right up.

In the midfield, Geelong has built out their depth over a number of seasons.

Patrick Dangerfield, Joel Selwood, Cam Guthrie and Isaac Smith are all over 30, but none are relied on too heavily. For perhaps the first time in his career, Dangerfield played within himself in a final last Friday night. So often he has failed trying to do too much.

The Cat midfield is certainly not the quickest in the league, but they know each other intimately and know where they are each going to be, which helps save and create a lot of time.

The Swans have more natural speed through the center of the ground, through the likes of Chad Warner and Errol Gulden, as well as Tom Papley when he goes in. Callum Mills is a great footballer, and Luke Parker is always a battering ram with sure hands.

Sydney probably have more ‘bit’ players but they have shown over the last two months that they are greater than the sum of their parts.

In the ruck, you’d back Tom Hickey to win the battle over Rhys Stanley. Hickey has been exceptional and was vying for All Australian honors in 2021. He’s capable of having a say.

Geelong were uber-impressive in their preliminary final win, while Sydney were in control for the most part before getting a fright late. Which preparation is better for the grand final?

So often, the scrappy prelim winner hoists the trophy over the one that put in a more commanding penultimate game. Think of Richmond over Port by six points in 2020 or the Bulldogs by six points over GWS in 2016. Hawthorn won a prelim by three points against Port in 2014 and by five points over Geelong in 2013, winning the flag both times.

Of course, you can find instances where the reverse has been applied, but we all have our preferences for these types of things.

Looking at the teams, it’s hard to identify a costly weak link in the Geelong outfit, while it’s much easier to find a few holes in the Sydney team. But the Swans can bring a level of pressure the Cats can’t – we know that they have been the latter’s undoing in finals under Chris Scott, albeit they survived against Collingwood.

I’m always partial to an upset on grand final day, and there have been enough of them in the last 20 years to justify it.

I’ll grant Geelong deserve favouritism, and are the mathematically correct options. But Sydney for me.