It comes as Australia’s Governor-General David Hurley confirmed he had appointed Morrison to “administer portfolios other than the Department of the Prime Minister and Cabinet”.

Albanese said he had sought advice from the Department of Prime Minister and Cabinet following a News Corp report that Morrison was sworn in as the second resources minister in December last year without the knowledge of some of his cabinet.

The report follows a new book, Plaguedby Simon Benson and Geoff Chambers, which claims Morrison also swore himself into the health and finance portfolios.

“This is extraordinary and unprecedented,” Albanese said.

“Australians knew during the election campaign that I was running a shadow ministry.

Albanese said he had spoken with the Secretary of the Department of Prime Minister and Cabinet, who would be seeking advice from the Solicitor General, among others, on the legality of Morrison’s extra portfolios.

“I’ll be getting a full briefing this afternoon,” Albanese said.

“We all know that Scott Morrison had trouble doing the job that he had. Perhaps it was because he was doing so many different jobs that we didn’t know that he had.”

Albanese said Australians deserved an explanation as to what had occurred.

“This is not some local footy club. This is a Government of Australia, where the people of Australia were kept in the dark as to what the ministerial arrangements were.

Former Prime Minister Malcolm Turnbull, who was replaced by Morrison in 2018, said tonight the incident was “one of the most appalling things I have ever heard in our federal government”.

Turnbull told the ABC’s 7.30 that “the idea that a prime minister would be sworn in to other ministries, secretly, is incredible. I’m astonished that Morrison thought he could do it.”

“This is sinister stuff. This is secret government. What Albanese said today about it is absolutely right. This is the sort of thing that, it is not something we associate with our form of democracy.

“It is very sinister. It is secret.”

Morrison’s successor as Liberal Party leader, Peter Dutton, said he wasn’t aware of the moves made by the former prime minister.

“Obviously the then prime minister had his reasons, his logic for it, but it was not a decision I was party to or was aware of. It was a decision-making process that he’s made,” Dutton told ABC radio this afternoon.

The opposition leader said he had found out about Morrison’s extra appointments by reading about it “in the paper in the last couple of days”.

Dutton also supported the actions of the governor-general in the matter.

“The governor-general has issued a statement today, and he’s a person for whom I have the utmost respect,” he said.

“And he’s explained his position, his understanding of the law and constitution, and I have no doubt that he has acted appropriately.”

In the statement released earlier on Monday, Hurley said Morrison’s appointments were consistent with the constitution.

“It is not uncommon for ministers to be appointed to administer departments other than their portfolio responsibility,” Hurley said.

“These appointments do not require a wearing-in ceremony – the governor-general signs an administrative instrument on the advice of the prime minister.

“Questions around appointments of this nature are a matter for the government of the day and the Department of the Prime Minister and Cabinet.

“Similarly, the decision whether to publicize appointments to administer additional portfolios is a matter for the government of the day.”

Earlier this morning, David Littleproud, who replaced Joyce as the Nationals leader ABC’s RN Breakfast program he did not know about Morrison’s extra ministerial roles.

“That’s pretty ordinary, as far as I’m concerned. If you have a cabinet government, you trust your cabinet,” Littleproud said.

“You create that environment in the cabinet room to have those discussions.

“If you don’t think a minister’s suitable to do that, that’s a discussion with the minister [and you] probably ask him or her to remove themselves.” 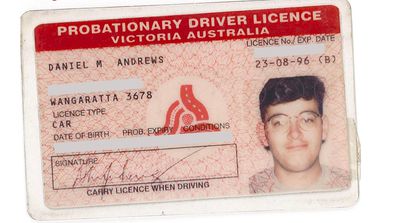 Can you tell which Aussie politician this is?