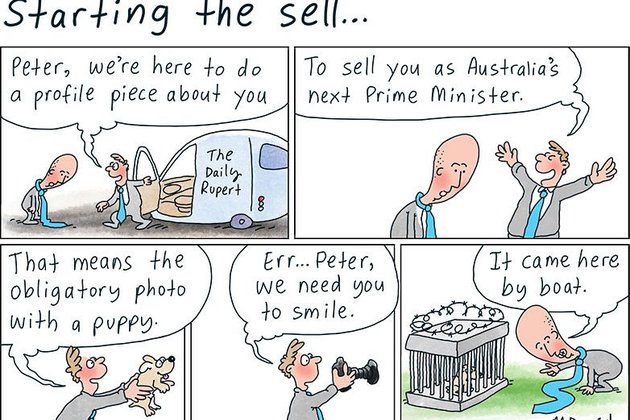 The press pack are acting as though the Coalition is temporarily exiled rather than categorically defeated, flooding the news cycle with the Dutton-led losing side and ignoring the Albanese Government, writes managing editor Michelle Pini.

AUSTRALIANS are moving ahead, tossing out the old and embracing reformative change, for the first time in a long time, as the newly elected Albanian Government takes power built on a platform of hope.

Together with a vibrant crossbench colored predominantly with teal Independents and Greens, the promise of regeneration is in the air as vote concerns about climate change, gender equality, cost of living and government integrity are finally recognised.

The Liberal Opposition, however, is lending new meaning to the tired old status quo as it continues its tone-deaf denial of the democratic process, blabbering on about the evils of climate science and the fear of people smugglers.

And the rest of the press pack is also still going along for the ride – the one in which entitled and privileged fossils continue to atrophy in regressive, fossil fuel-loving denial.

Founder and publisher David Donovan explores the significance of the new Labor Government for Rupert Murdoch’s stranglehold over Australia’s media.

This week, saw an historic shift in government policy, in the public mood and in the tone of our national identity. In just a few days – even before all the votes were counted – Prime Minister Anthony Albanese began by declaring his Government’s commitment to the Uluru Statement from the Heart, as the Aboriginal and Torres Strait Islander flags stood proud at Parliament House for the first time. It was a fitting start during National Reconciliation Week.

The new PM paved the way to revive Australia’s partnership with France, soured by his predecessor, held his own at the Quad summit, where Morrison had only been tolerated, and felt home to Biloela the Murugappan family, imprisoned and tortured for the past four years under Coalition rule.

Senator Penny Wong wasted on the team mending fences with Pacific Island leaders and restoring our place as a partner in the region, ending in one meeting the privileged bully approach taken by the Coalition for the nine years prior.

Closer to home, Albanese restored faith in the Office of the Prime Minister and Cabinet by evicting Secretary Phil Gaetjens – the man covering who enabled a culture of toxicity by up the Parliament House rape of Brittany Higgins.

And Albanese announced his new Cabinet, appointing strong women to ten front bench positions, including Tanya Plibersek as Environment Minister. Interestingly, despite climate change now established as one of the key election issues that saw the loss of a staggering 19 Liberal seats, many in party heartland, the now disoriented Coalition media cheer squad have described this as a “demotion” for Plibersek.

Apparently, the media chorus is still overlooking the fact that lack of action on climate change was a primary factor in the Liberals’ defeat. Left aside in this assessment, too, is the detail that the current Deputy Opposition Leader and one of Morrison’s “best ministers” Sussan Ley also came from the environment portfolio.

Perhaps this bizarre assessment of Plibersek being given the crucial environment ministry, along with the level of coverage still devoted to the losing side, best encapsulates the extent to which the establishment media have lost touch with reality.

The Fourth Estate is ensconced with the idea that the Coalition is simply in exile and will soon be returned to its rightful place as rulers of the land. This relentless default position denies the simple facts, which are that the Labor Party has had a formidable win of 77 seats (the same number of seats described as a “miracle” feat for Morrison at the previous election) and is now the Albanese Government, while the Liberal Party has been sent packing in demoralizing defeat.

Labor did not lose a solitary seat to the Liberals. But rather than report on this electoral win and the subsequent achievements in a matter of days of the newly elected Labor Government, however, the news cycle is dominated with Dutton, with his token female deputy, the once disgraced and sacked for corruption, Sussan Ley, along with the change of leadership at the National Party camp.

The Coalition, meanwhile, remains firmly in a time warp. Not only is the new Liberal leader the most aggressively out of touch choice since … well, since Morrison – and possibly Abbott – but the sycophantic media squawking of Dutton’s “softer” side and “true” nature, hidden successfully from view for the past 21 years he’s been in parliament, is truly mind-blowing.

In his first speech as the newly appointed Leader of the Opposition, Dutton tried on a disconcerting smile to peddle his “new” persona as he droned on about “forgotten people” – though he seems to have forgotten who these people might be – and offered the following words of wisdom:

Dutton’s incoherent rant, which included several menacing references to “people smugglers”, Labor’s debt (particularly rich coming from the party that left us with unprecedented astronomical debt) seemed strangely reminiscent of Dutton’s previous incarnation – the one which made jokes about rising sea levels in Pacific nations and incessantly warned of “national security” as he locked up children and people fleeing war-torn nations.

Interestingly, this entire “new look” approach, during which the dark lord who previously walked out on the Apology to the Stolen Generations professed a sudden interest in Indigenous Australians, was delivered in a room strangely devoid of the Aboriginal and Torres Strait Islander flags. The Opposition Leader now says he only walked out because he “believed that the apology should be given when the problems were resolved and the problems are not resolved”.

The press pack of know that footage of Dutton’s previous deeds is available on the internet, right?

While we can never underestimate the power of Murdoch’s media stranglehold, which has spread like COVID during Coalition rule to most of the mainstream media, hopefully, these words from IA investigations editor Ross Jones will ring true: