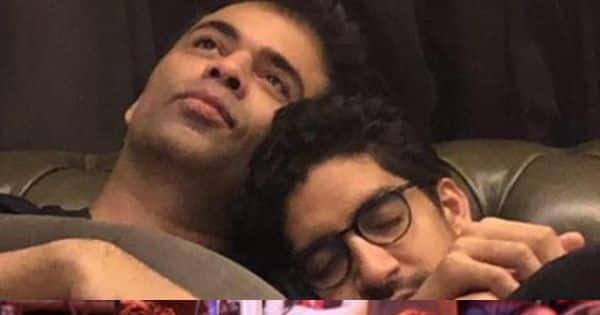 Brahmastra is one of the most eagerly awaited films of the year. Fans are keen to see Ranbir Kapoor and Alia Bhatt onscreen for the first time. The song Kesariya is already a huge hit. As we know, Brahmastra has been in the making for five long years. It is a labor of love for Ayan Mukerji and Dharma Productions. Today, Ayan Mukerji turns a year older. Karan Johar shared a pic with Ayan Mukerji with a message. It read, “Love is such a strong feeling and emotion… it can be divided and yet felt in abundance… I love you Ayan and feel protective about you as much as i do for my twins…. I know the decade (a whole decade) of work you have put into your film BRAHMASTRA … I have never seen anyone dedicate most of their professional lives to one project the way you have….” Also Read – ‘Boycott Brahmastra’ trends: Is Karan Johar worried about Ranbir Kapoor-Alia Bhatt starrer? he says, ‘We can’t predict the future’

While Ranbir Kapoor is not on social media, Alia Bhatt took to Instagram to wish Ayan Mukerji. Brahmastra is a special film as it is said that Ranbir Kapoor and Alia Bhatt got close when they were doing a recce in Europe. While Alia Bhatt had been separated from Sidharth Malhotra, Ranbir Kapoor had been single post split with Katrina Kaif. Also Read – After Shah Rukh Khan’s Pathaan, Ranbir Kapoor’s Brahmastra faces boycott; actor blamed for INSULTING Hindu Gods along with Aamir Khan in PK

Brahmastra is coming in theaters on September 9, 2022. There is immense hype for the movie. But the Boycott Bollywood gang has already raised objections on Brahmastra. They are saying there is a scene of Ranbir Kapoor inside a temple wearing shoes.