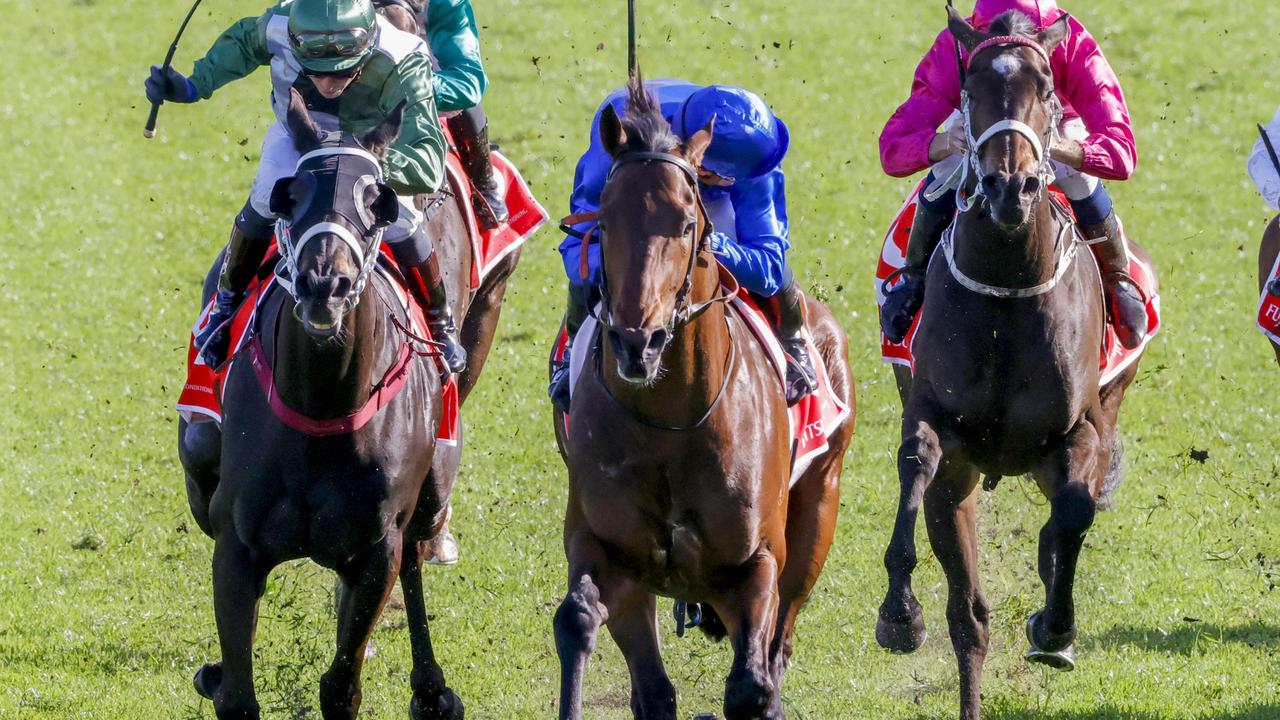 Anamoe’s jockey James McDonald talks of a feeling of invincibility when he’s riding the equine superstar.

It’s understandable both men are searching for superlatives as Anamoe in full flight is an awesome sight.

For evidence, watch a replay of Anamoe’s win in the Group 1 $1m George Main Stakes (1600m) at Royal Randwick on Saturday.

“Anamoe has come back in fine order, that’s a great effort from the team back home and he’s just a wonderful horse,” Cummings said.

“To see him come back and win first-up and that (today) has underlined his whole preparation. It signaled his intent for him and the remainder of the campaign he can keep his eyes on the big targets ahead and he can let them all know he’s coming for them.

“He’s the alpha male in his demeanour. He is the king of his own box, same for a paddock that we put him in yet he can have a pick of grass after a gallop and look like Nijinsky after the Arc or Dancing Brave after one of the classics.

“He’s a beautiful horse to have anything to do with and it’s just a privilege for us to be racing a horse like Anamoe for His Highness Sheikh Mohammed.”

It was a privilege to be at Royal Randwick to watch what might be the last time we see Anamoe in Sydney this spring.

Most thought McDonald intentionally took bad luck out of the equation when he slid across on Anamoe early to settle outside leader Hinged – but he jockey had a different take on the tactic.

“It was the one place I didn’t want to be, outside leader, but sometimes you have to take your medicine,” McDonald said.

“A more genuine run race is more up his alley as he has a lethal turn of foot but his best asset is he can sustain it better than others.

“When it is a fast run race, it gets everyone else out of their comfort zone but he just keeps going.

“But he’s exceptional, he’s up there with the best I’ve sat on. He oozes that much class. When you hop on them you feel invincible.”

Anamoe ($1.65 favourite) always looked in control of the race and claimed the fifth Group 1 of his career with a comfortable margin of nearly a length on the line.

The mares chased Anamoe home with Icebath ($13) running a blinder to get up for second, just in front of game early leader Hinged ($10) third followed in quick succession Montefilia, Fangirl and Duals.

The connections of those seas had reason to be upbeat after the race because they have been beaten by arguably the best middle distance weight-for-age horse in the nation.

Anamoe, which has now won nine of his 18 starts and more than $5.8m, completed the Winx Stakes-George Main Stakes double to start his four-year-old season.

Anamoe is following in the trail blazed by those legendary champions although Cummings hasn’t finalized the four-year-old’s next start before the Cox Plate.

“We’ve done a lot of thinking beyond today and we haven’t locked him into exactly anything but it goes without saying, it looks a very nice race for him, the Caulfield Stakes in three weeks,” the trainer said.

“We’ve got some time to consider what we’d like to do. He’s a fast horse, he could always drop back if we need to.

“That’s going to be the perfect stepping stone for him and he’s been able to pick up two important weight-for-age Group 1s along the way and he keeps lifting his value and his profile and gets more and more attention on him which is very fitting for a wonderful horse.

“I don’t think there’s a thing wrong with the form here and we’re cooking with gas wherever we want to go with Anamoe.

“We’re very grateful to have him and that’s the most important thing and now it’s about letting reality play out, focus on what we’ve got to do and let Anamoe do the talking.”