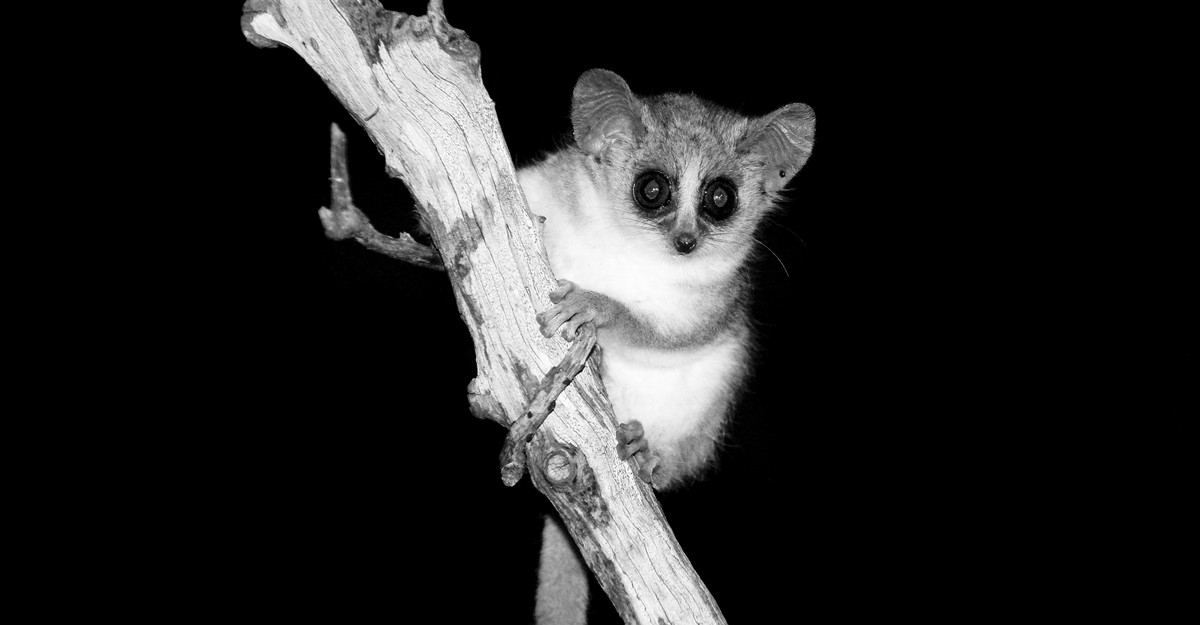 Many, many millions of years ago, an HIV-like virus wriggled its way into the genome of a floofy, bulgy-eyed lemur, and got permanently stuck.

Trapped in a cage of primate DNA, the virus could no longer properly copy itself or cause life-threatening disease. It became a tame captive, passed down by the lemur to its offspring, and by them down to theirs. Today, the benign remains of that microbe are still wedged among a fleet of lemur genes—all that is left of a virus that may have once been as deadly as HIV is today.

Lentiviruses, the viral group that includes HIV, are an undeniable scourge. The viruses set up chronic, slow-brewing infections in mammals, typically crippling a subset of immune cells essential to keeping dangerous pathogens at bay. And as far as scientists know, these viruses are pretty uniformly devastating to their hosts—or at least, that’s true of “all the lentiviruses that we know of,” says Aris Katzourakis, an evolutionary virologist at the University of Oxford. Which means, a long time ago, that lemur lentivirus was likely devastating too. But along somewhere the way, the strife between lemur and lentivirus dissipated enough that their genomes were able to mix. It’s proof, says Andrea Kirmaier, an evolutionary virologist at Boston College, that lentivirus and host “can coexist, that peace can be made.”

Détentes such as these have been a fixture of mammals’ genomic history for countless millennia. Scientists have stumbled across lentiviruses embedded in the DNA of not just lemurs, but rabbits, ferrets, gliding mammals called colugos, and most recently, rodents—all of them ancient, all of them quiescent, all of them seemingly stripped of their most onerous traits . The infectious versions of those viruses are now extinct. But the fact that they posed an infectious threat in the past can inform the strategies we take against wild lentiviruses now. Finding these defunct lentiviruses tells us which animals once harbored, or might still harbor, active ones and could potentially pass them to us. Their existence also suggests that, in the tussle between lentivirus and host, the mammal can gain the upper hand. Lemurs, rabbits, ferrets, colugos, and rodents, after all, are still here; the ancient lentiviruses are not. Perhaps humans could leverage these strange genetic alliances to negotiate similar terms with HIV—or even extinguish the modern virus for good.

When viruses assimilate themselves into animal genomes in a heritable way, a process called endogenization, scientists generally see it as a “kind of a mistake,” says Daniel Blanco-Melo, a virologist at the Fred Hutchinson Cancer Center. Once cemented into one host, the virus can no longer infect others; much of its genome may even end up degrading over time, which is “certainly not what it evolved to do.” The blunders usually happen with retroviruses, which have RNA-based genomes that they convert into DNA once they enter cells. The flip allows the viruses to plug their genetic material into that of their host, which is then forced to manufacture its pathogen’s proteins alongside its own. Sometimes, a retrovirus will inadvertently stitch itself into the genome of a sperm or an egg, and its blueprints end up passed to its host’s progeny. If the melding doesn’t kill the animal, the once-pathogen can become a permanent fixture of the creature’s DNA.

Over time, the human genome has amassed a horde of these viral hitchhikers. Our DNA is so riddled with endogenous retroviruses, ERVs for short, that they technically occupy more space in our genomes than bona fide, protein-manufacturing genes. But on the long list of ERVs that have breached our borders, lentiviruses are conspicuously absent, in both our genomes and those of other animals; up until the mid-aughts, some scientists thought lentiviruses might not endogenize see you It wasn’t a totally wonky idea: Lentiviruses have complex genomes, and are extremely picky about the tissues they invade; they’re also quite dangerous, not exactly the kind of tenant that most creatures want occupying their cellular real estate. Or perhaps, some researchers posited, lentiviruses were endogi-capable, but simply too young. If they had only begun infecting mammals within the past few hundreds of thousands of years, there might not have been time for such accidents to occur.

Then, some 15 years ago, a team led by Katzourakis and Rob Gifford, an evolutionary virologist at the University of Glasgow, discovered an endogenous lentivirus called RELIK in the genomes of rabbits and then in hares, a hint that it had lodged itself in the animals’ mutual ancestor at least 12 million years before. In an instant, the lentivirus timeline stretched, and in the years since it has kept growing. Scientists have now identified endogenous lentiviruses in a wide enough array of mammals, Gifford told me, to suspect that lentiviruses may have been a part of our history for at least 100 million years—entering our very distant ancestors’ genomes before the demise of the dinosaurs , before the rise of primates, before the land masses of North and South America kissed. “That tells us just how long virus and host have been connected,” Katzourakis told me. Through those eons, lentiviruses and the mammals they afflict have been evolving in concert—the pathogen always trying to infect better, the animal always trying to more efficiently head its enemy off.

Knowing that lentiviruses are so deeply laced into our past can help us understand how other mammals are faring against the ones that are still around today. Two species of monkeys, sooty mangabeys and African green monkeys, have spent so much evolutionary time with a lentivirus called SIV—the simian version of HIV—that they’ve grown tolerant of it. Even when chock-full of virus, the monkeys don’t seem to suffer the severe, immunocompromising disease that the pathogen induces in other primates, says Nikki Klatt, a microbiologist and an immunologist at the University of Minnesota. The key seems to be in the monkeys’ ultra-resilient, fast-healing guts, as well as their immune systems, which launch more muted attacks on SIV, keeping the body from destroying itself as it fights. Such immunological shrugs could enable certain retroviruses to eventually endogenize, says Lucie Etienne, an evolutionary virologist at the International Center for Infectiology Research, in Lyon, France.

Many mammals have also developed powerful tools to prevent lentiviruses from reproducing in their bodies in the first place—proteins that can, for instance, mess with viral entry or replication, or prevent new viral particles from busting out of already infected cells. Viruses, too, can mutate and evolve, far faster than animals can. That’s given the pathogens plenty of chances to counteract these defenses; HIV, for instance, has no trouble sidestepping or punching through many of the shields that human cells raise against it.

Read: Could genetics be the key to never getting the coronavirus?

But take the equivalent immune-defense protein from a monkey, and HIV “cannot degrade that,” says Michael Emerman, a virologist at the Fred Hutchinson Cancer Center. Other primates have had different infectious histories from ours, which have shaped their immune evolution in distinct ways. Studying those primates’ genomes—or maybe even the genomes of mammals that are carrying lentiviruses as neutered genetic cargo—might eventually inspire therapies that “augment our immunity,” Emerman told me. At the very least, such experiments could point scientists to lentiviruses’ common weak spots: the parts of the virus that ancient immune systems once targeted successfully enough that their hosts survived to tell the tale. “Evolution has already taught us the best places to target retroviruses,” says Maria Tokuyama, a virologist at the University of British Columbia. “Why not push for the types of interactions that we already know have worked?”

Another, perhaps more radical idea might yet give way to an HIV cure: speeding the path toward endogenization—allowing lentiviruses to tangle themselves into our genomes, in the hopes that they’ll stay permanently, benignly put. “We could figure out a way to silence the virus, such that it’s there but we don’t care about it,” says Oliver Fregoso, a virologist at UCLA. One of the holy grails of HIV research has always been cooking up a vaccine that could prevent infection—an extraordinarily difficult thing to do. But if some sort of gentle armistice can be reached, Boston College’s Kirmaier told me, “maybe we don’t need to go that far.”

Cedric Feschotte and Sabrina Leddy, virologists at Cornell, are among those pushing for such an intervention. They’re capitalizing on HIV’s tendency to go dormant inside cells, where it can hide from some of our most powerful antiretroviral drugs. The virus essentially “plays dead,” Leddy told me, then reawakens when the coast is clear. But if HIV could be silenced stably, its rampage would end when it jammed itself into the genome. “We’re hoping to emulate this natural path that ERVs have taken,” where they’re effectively locked in place, Leddy said. The imprisoned viruses could then be excised from cells with gene editing.

The idea’s ambitious and still a way off from yielding usable treatments. But if it works, it could produce an additional perk. After setting up shop inside us, our viral tenants can start to offer their landlord benefits—such as fighting off their own active kin. In recent years, researchers have found that some animals, including cats, chickens, mice, primates, sheep, and even humans, have been able to co-opt proteins from certain endogenous retroviruses to create blockades against incoming viruses of similar ilk. Blanco-Melo and Gifford were part of a team that made one such discovery in 2017, describing an ERV that ancient monkeys and apes might have used to strip viral entryways off the surfaces of their cells. When encountering an ERV-ed-up host, the infectious, still-pathogenic version of that ERV would no longer have been able to get in.

Eventually, the active retrovirus “just went extinct,” Blanco-Melo told me—an outcome that he thinks could be attributable to the antics of its endogenous counterpart. It’s a devious move, essentially a way to “turn the virus against itself,” Kirmaier said. This sort of friendly-fire tactic may already be at work among lentiviruses, duking it out inside and outside host genomes: Species with endogenous lentiviruses usually aren’t bedeviled by active lentiviruses, at least none that has been identified yet, Fregoso told me. With any luck, the same could someday be true for HIV, the virus little more than a memory—or an idle fragment in our cells.