Parineeti Chopra and Harrdy Sandhu starrer Code Name: Trianga trailer released today. The film is action packed and Parineeti will be seen doing some intense action scenes as a RAW agent. As the trailer was released, many celebrities praised her. The film is releasing on October 14. Earlier in the day, Kunal Kemmu praised the trailer and called it ‘Tod Fod’. And now her dela Ishaqzaade co star Arjun Kapoor also appreciated the trailer. He shared it on his Instagram stories of him.

The actor, who is in Scotland currently, wrote, “@parineetichopra This looks amazing. Make way for an action-packed dhamaka!: In the film, Parineeti Chopra is playing a RAW agent and is on a fearless mission for the country. Hardy Sandhu is playing the role of a doctor. Sharing the trailer on social media, Parineeti wrote, “HERE IT IS! – TRAILER OUT NOW #CodeNameTiranga trailer out now! Releasing in cinemas on 14th October 2022.” The film also stars Sharad Kelkar, Rajit Kapur, Dibyendu Bhattacharya, Shishir Sharma, Sabyasachi Chakraborty and Deesh Mariwala. 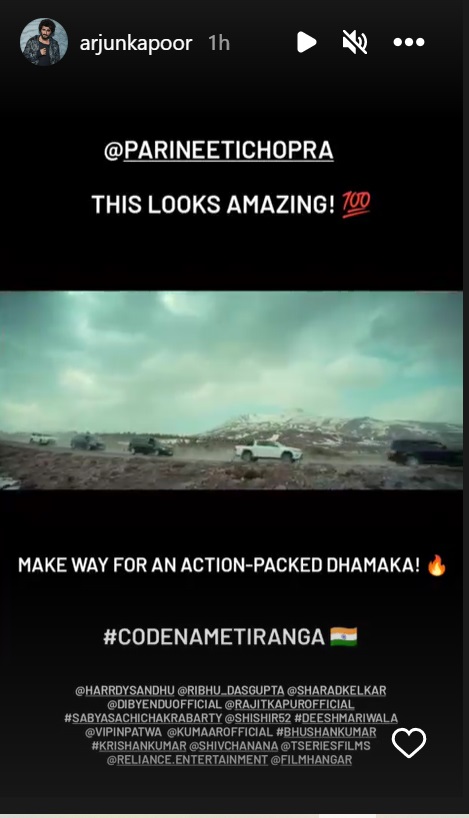