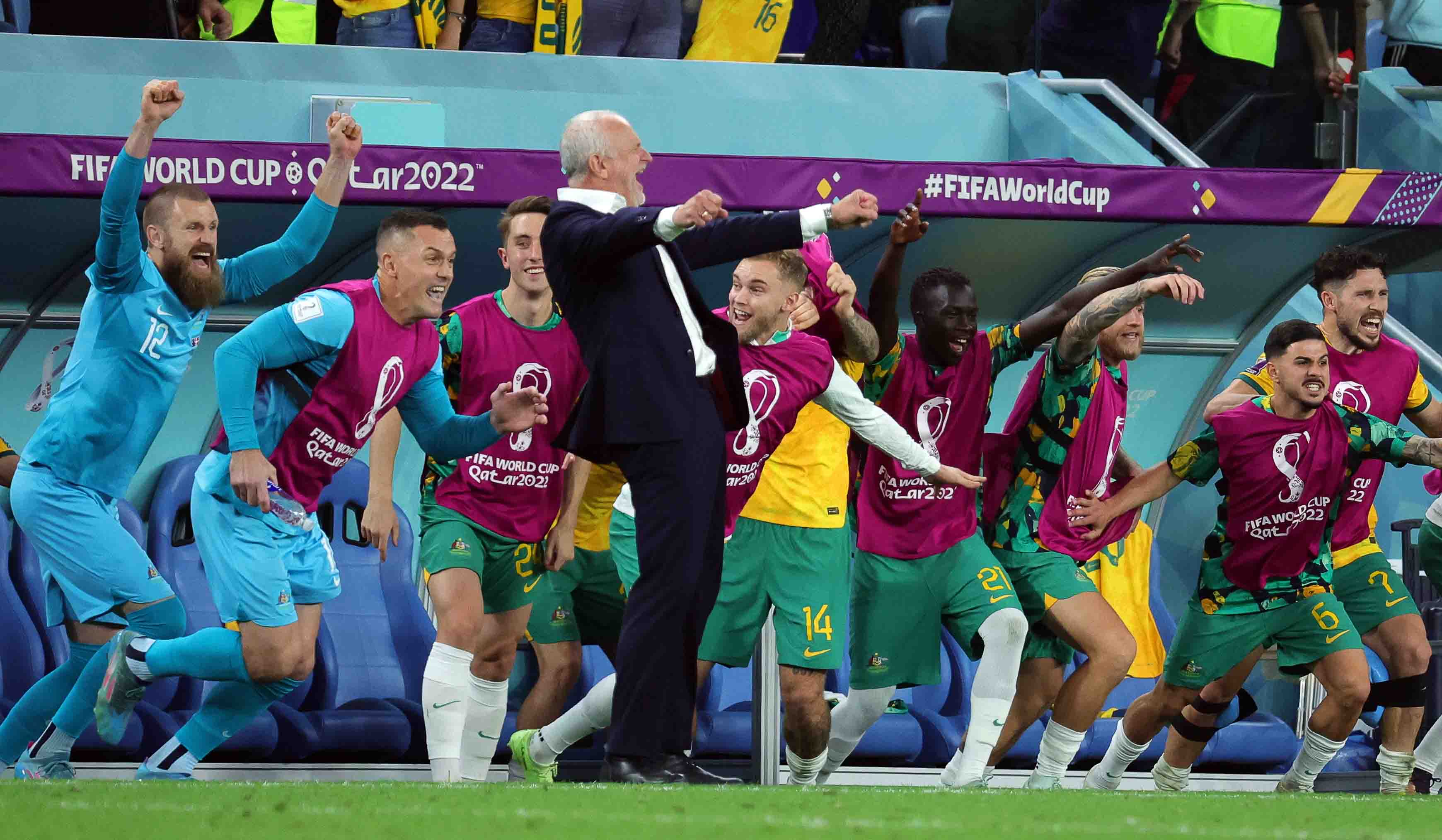 Arnold reckons the moniker bestowed on the socceroos‘ famed 2006 team now belongs to his unfancied squad after they secured passage into the knockout stages of the World Cup in Qatar.

It is just the second time the socceroos have reached the round of 16, repeating the achievement of 2006.

Under Arnold, Australia have won two games at a World Cup for the first time – the 2006 team advanced to the round of 16 with a win and a draw.

And Arnold has overseen two clean sheets in a row, another first for Australia at a World Cup.

“It’s the first time ever an Australian team has won two games of the World Cup in a row,” Arnold said after his team’s dramatic 1-0 win against Denmark in Doha.

“Because we have been listening and hearing about the golden generation of 2006 who got four points – and now we have got six.

Arnold was nearly sacked in March by Football Australia as the socceroos‘ qualification campaign stuttered.

But he was backed, with his contract due to expire when Australia’s Qatar campaign ends.

The turnaround has been striking for Arnold, who has been roasted by some pundits and fans for a supposed lack of tactical wisdom.

His players say such criticism is unfounded.

“When things don’t go well, perceived by the public and all that, there is criticism,” Captain Mat Ryan said.

“And it’s about how you deal with it and how resilient you are.

“And he has been that. What he has gone through and been put through, it has been quite harsh at times.

“But he keeps finding answers.”

One of those answers came at halftime against Denmark, who clearly outpointed the socceroos in the first half at Al Janoub Stadium.

“I won’t lie, I am not going to say I didn’t get exposed one or two times,” Degenek said.

Arnold was quick to find a solution.

“We actually sat down at halftime and Arnie told us in the back four what we should do and how we should deal with it,” Degenek said, hailing the coach’s composure and clear messaging.

“The way he gets his message across makes it so simple for us to understand. It’s very clear, very simple.

“He is very calm, which helps. He is not someone that runs in and throws things around and makes it hectic, and then makes you panic even more.”

Meanwhile, the coach of Australia’s next opponent says his highly-credentialed team shouldn’t be considered favourites.

Argentina coach Lionel Scaloni says it is “madness” for his team to play their World Cup last-16 game against Australia with just two days left after their last group match.

The South Americans beat Poland 2-0 on Wednesday (Thursday AEDT) to top their group and set up Saturday’s knockout clash with the Socceroos (6am Sunday AEDT).

“It’s absolute madness to play in nearly two days and a bit when we are top of the group. I can’t understand it,” Scaloni said after the game at Doha’s 974 Stadium ended just before midnight local time.

“What time is it? Nearly one o’clock in the morning … Thursday, the next day is for preparation and then we play.

“Those aren’t good conditions but it’s the same for everyone. We’re first in the group. We could have had more rest.”

Australia will only benefit from a few hours’ more time to recuperate and prepare than their opponents, given their last group match was completed just a few hours earlier.

Argentina have found their rhythm again in beating Mexico and Poland comfortably in Group C after their shock opening loss to Saudi Arabia.

But Scaloni said they must be wary of Australia who fought their way to the last-16 with gritty wins over Denmark and Tunisia.

“Our fans should enjoy this. We are happy today but we don’t want to be euphoric,” he said.

“All the games are hard. Anyone who thinks the match against Australia will be easy is wrong. We’re not favorites.

“If you think that just because we won today, we are going to become World Cup winners, you’re wrong.”