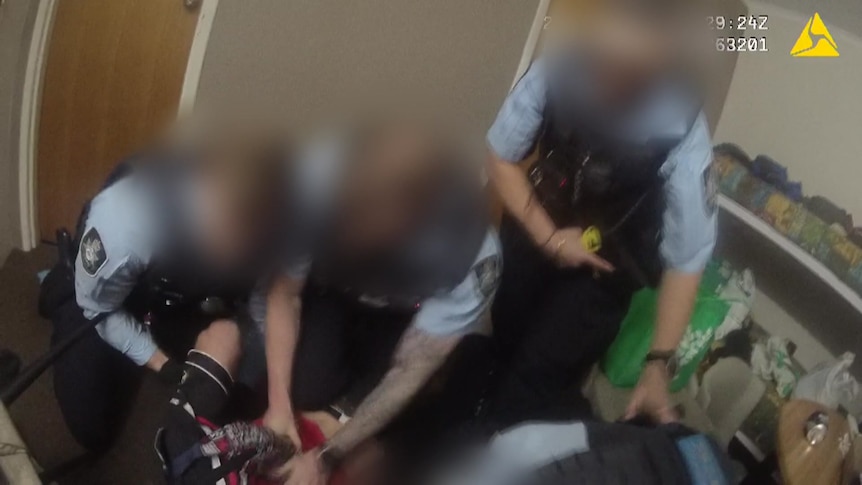 The arrest of a Canberra man who was tasered and pepper-sprayed on suspicion he had breached the peace has been referred to ACT Policing’s professional standards unit after the case was thrown out by a court.

Thirty-nine-year-old Indigenous man, Luke Marsh had been staying in a hotel room in Canberra in November last year, when police entered the room and tasered him several times.

Dramatic footage of the arrest was tendered in the ACT Magistrates Court yesterday as prosecutors pursued a charge of resisting police.

The court heard police had been called to the area by paramedics, who said their work had been hampered by an intoxicated male.

When the officers arrived they said they saw Mr Marsh and followed him to his hotel room, where he shut the door and refused to let them in.

Police eventually gained entry to the room with a master key before the altercation legs place, which included tasering Mr Marsh on his buttocks and upper, as he resisted officers’ attempts to handcuff him.

When he was pepper-sprayed, Mr Marsh can be heard complaining of the irritation over and over.

One officer tried to reassure him, saying he would get water to help relieve the pain.

Mr Marsh also remonstrated with police about why they were arresting him, repeatedly shouting “I’ve done nothing”.

“How did you do that for, why?” Mr Marsh asked.

“Because you are nothing but violent towards us,” one officer replied.

But the case failed to stand up in court.

The court found police had not established Mr Marsh was the source of the breach of the peace complaint, meaning the entry to his room where he allegedly resisted police did not hold.

ACT Policing said the circumstances of the arrest had been referred to Professional Standards for consideration.

Last year, a magistrate and Indigenous health advocates slammed police for their “unlawful” arrest of Mr Marsh in May 2020.

Police had arrested Mr Marsh for being drunk and disorderly and pepper-sprayed him as he sat handcuffed in the back of a police van.

He pleaded not guilty to several charges, and was cleared of nearly all of them after a magistrate found police had “cut corners” in a “serious misuse” of their powers.

The chief executive of Aboriginal Legal Service for the ACT and New South Wales, Karly Warner, said the latest arrest of Mr Marsh “yet again exposed ACT Policing’s culture of discrimination and violence against Aboriginal people”.

“Little more than a year ago, Mr Marsh’s arrest for alleged drunk and disorderly behavior was deemed unlawful by a magistrate. Now he has been dragged to court again on ‘breach of the peace’ charges, which have been thrown out with heavy criticism again leveled at the arresting officers,” she said.

“Last time, Mr Marsh was pepper-sprayed and held face down on the floor; this time he was tasered and pepper-sprayed in his own hotel room, after telling officers that he just wanted to go to sleep.

“No wonder Mr Marsh – like so many Aboriginal people – doesn’t feel safe around police officers. What will be the result the next time he is targeted?”

Ms Warner said “the latest red flag from ACT Policing” was proof that officers needed better cultural competence training and that there should be a royal commission into the over-representation of Aboriginal people in the ACT’s legal system.

“Accountability is needed urgently – not in a few months or years, but now,” she said.

“The safety of Aboriginal people in the ACT depends upon it.”