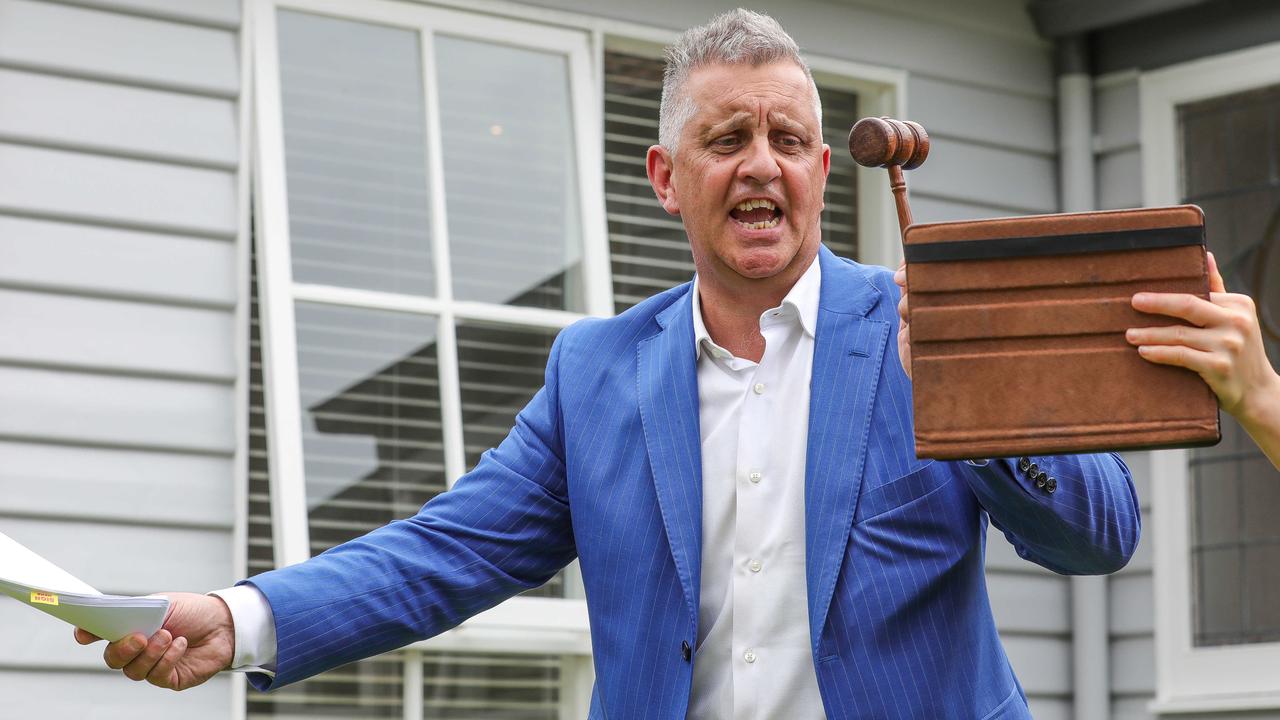 And with buyers in the box seat for the first time during spring in years, experts have revealed how to get the upper hand under the hammer.

There are 865 auctions scheduled for next week, up from just 128 this week, according to PropTrack, with a balanced clearance rate hovering around 60 per cent over the past month.

But despite the favorable buying climate, the bidding process can still be daunting and with soaring interest rates buyers are being warned to avoid blowing their budget.

“Auction contracts are unconditional, so it’s good to talk to your banks and brokers and make sure you have the right capacity,” Ray White Burwood partner Jichen Quan advised.

“Before you attend an auction, you can do some research in that local market to set a price in mind for you to bid up to.”

Sold By Group auctioneer Andy Reid strongly advised buyers to leave their kids with a babysitter on auction day.

“The amount of parents that get distracted is insane and it’s not a time to be distracted,” Mr Reid warned.

He said it was favorable bid buyers to enter exclusive negotiations if passed in by holding the highest, as a pass in on a vendor bid left in the dark.

“If that happens, you’re jumping into a shark tank of a private sale, in which you’ll either miss out or overpay,” Mr Reid said.

“If you turn up to the auction of your dream home, and no one wants to bid first, make the auctioneer sweat by hanging on until the last minute before matching the last vendor bid.

“You’ll win the right to negotiate from a strong position, which will give you a better chance of getting a win at a better level.”

Property Home Base founder and flat fee buyer’s agent Julie DeBondt-Barker said properties usually sold during the immediate negotiation after the home was passed in.

“If you wait too long and it gets passed in to another buyer, you will most likely miss out,” she said.

“Bid confidently and don’t wait too long to get in … the agents will only be dealing with the last bidder to negotiate an agreeable price.”

It’s also worth checking in with the agent prior to the auction to see what the competition looks like.

Homeowner Kiran Reddem recently purchased a Berwick property under the hammer in his first time bidding.

“There were only three or four people that had inspected, which meant the competition was lower,” he said.

“I finished my house inspection and conditional approval well before the auction and my pre-finance allowed me to go up to $950,000 — but I still didn’t want to bid over $925,000.”

But for those new to the game and who can afford it, a buyer’s advocate can be a handy tool.

Ms DeBondt-Barker said even buyer’s agents often engaged somebody else to bid for them for their own home purchases.

“It’s a highly emotional situation and remaining calm and focused is critical to your success,” she said.

An advocate was also helpful in a situation where the property was passed in, whether that be to the highest bidder or open to anyone.

“You will need a professional negotiator by your side to ensure you get the very best outcome,” Ms DeBondt-Barker added.

“Agents are usually in a hurry and the pressure to seal the deal will be intense.”

However, EYS auctioneer Fabian Sanelli noted that for buyers with time on their side, it could be just as beneficial to prepare by scouting local auctions and keeping emotions in check on the big day.

“Allocating that money towards more bidding at the auction is far more powerful (than a buyer’s agent),” Mr Sanelli said.

In addition to setting a realistic budget prior to auction, it was also important to complete thorough due diligence.

“This means having the contract reviewed by a conveyancer or solicitor, having a building inspection completed and in some cases, a pest inspection,” Ms DeBondt-Barker said.

She also advised buyers to research recent sales in the area, find out the vendor’s preferred settlement date, and to confirm that their finances were still pre-approved and had not lapsed.

Plus, purchasers should ensure their bank transfer limit was lifted prior to the auction, as successful bidders will need to transfer funds directly on the day.

Sign up to the Herald Sun Weekly Real Estate Update. Click here to get the latest Victorian property market news delivered direct to your inbox.

Kim Kardashian is cleaning out her housing portfolio, listing two homes in a week

The Block 2022 Tree Change: Every room reveal so far

Originally published as Auction buying guide: Why Victorian home seekers are in the box seat this spring