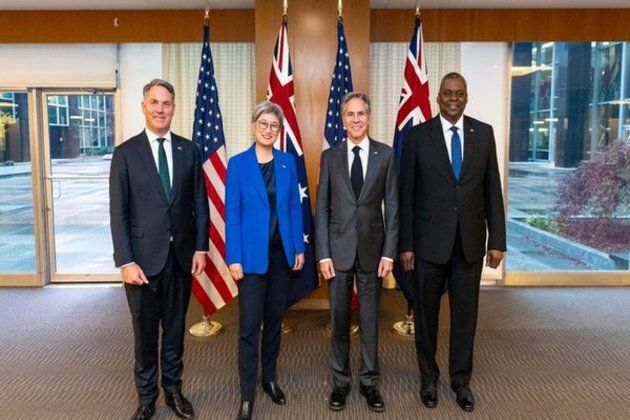 washington [US]December 7 (ANI): Australia and the United States have announced plans to increase cooperation for maintaining a free and open Indo-Pacific region.

This commitment was made as US State Secretary Antony Blinken and Defense Secretary Lloyd Austin hosted Australian Foreign Minister Penny Wong and Defense Minister Richard Marles on December 6 in Washington to advance cooperation in the Indo-Pacific region, according to a statement released by Pentagon.

The two countries also released a statement on the occasion of the 32nd annual Australia-United States Ministerial Consultations (AUSMIN).

“The principals committed to deepening cooperation, bilaterally and with regional partners and institutions, to ensure an Indo-Pacific region that is free, open, stable, peaceful, prosperous, and respectful of sovereignty. The principals affirmed that regional growth and stability are underpinned by international law, which serves the interests of all nations,” the Pentagon said in a statement.

They committed to enhancing deterrence and resilience through coordinated efforts to offer Indo-Pacific nations support to resist subversion and coercion of any kind.

Defense and Foreign ministries of the US and Australia committed to strengthening their engagement with Indo-Pacific countries to promote economic development and security.

“The four principals emphasized the importance of all states being able to exercise rights and freedoms consistent with international law as reflected in the United Nations Convention on the Law of the Sea (UNCLOS), including freedom of navigation and overflight,” Pentagon added.

They reiterated their strong opposition to destabilizing actions in the South China Sea, such as the militarization of disputed features and dangerous encounters at sea and in the air. They also expressed concern about other actions by the People’s Republic of China (PRC), including it asserting excessive maritime claims that are inconsistent with international law.

The ministers resolved to work with partners to support regional maritime security and reiterated Taiwan’s role as a leading democracy in the Indo-Pacific region. “They also reaffirmed their commitment to maintaining peace and stability across the Taiwan Strait and shared opposition to unilateral changes to the status quo,” the statement read.

The four principals emphasized the importance of all countries managing competition strategically responsibly and committed to work together to ensure competition does not escalate into conflict. “The United States and Australia look to the PRC to do the same and plan to engage Beijing on risk reduction and transparency measures.”They also affirmed the importance of cooperation with China on issues of shared interest, including climate change, pandemic threats, non -proliferation, countering illicit and illegal narcotics, the global food crisis, and macroeconomic issues. (ANI)