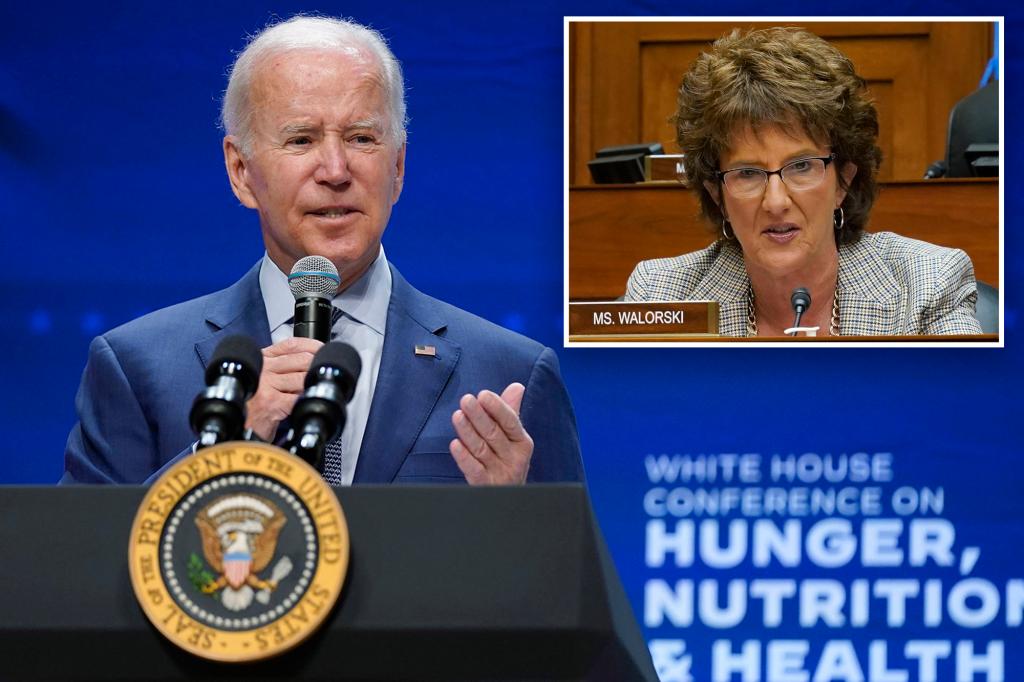 President Biden asked for the late Rep. Jackie Walorski to identify herself at a Washington event Wednesday, forgetting that the Indiana Republican died in a car crash last month.

Biden made the embarrassing error while thanking bipartisan members of Congress at a nutrition event near the White House.

“I want to thank all of you here, including bipartisan elected officials like Representative [Jim] McGovern, Senator [Mike] Braun, Senator [Cory] Booker, Representative Jackie — are you here? Where’s Jackie? — I think she was going to be here,” the president said.

Biden, 79, is the oldest-ever president and his mental acuity is regularly questioned by his political foes — though Biden and his defenders have brushed off concerns by saying the commander-in-chief is simply prone to gaffes.

The White House released a statement from the mourning president Walorski on Aug. 3 after she perished in an Indiana wreck alongside her press secretary, Emma Thomson, and St. Joseph County Republican Party Chairman Zachery Potts.

The tragedy occurred when Walorski’s vehicle, driven by Potts, crossed the median of Indiana State Road 19 and hit another car driven by 56-year-old Edith Schmucker, who also died.

“Jill and I are shocked and saddened by the death of Congresswoman Jackie Walorski of Indiana along with two members of her staff in a car accident today in Indiana,” Biden said at the time.

“Born in her beloved South Bend as the daughter of a meat-cutter and firefighter, she spent a lifetime serving the community that she grew up in — as a journalist, a nonprofit director, a state legislator, and eventually as a Member of Congress for the past nine and a half years,” he said.

“We may have represented different parties and disagreed on many issues, but she was respected by members of both parties for her work on the House Ways and Means Committee on which she served,” Biden said. “She also served as co-chairs of the House Hunger Caucus, and my team and I appreciated her partnership as we plan for a historic White House Conference on Hunger, Nutrition, and Health this fall that will be marked by her deep care for the needs of rural America.”

The flag atop the White House was also flown at half-staff for two days after Walorski’s death.

Although Republicans, including former President Donald Trump, allege that Biden is in mental decline, Democrats note that he’s struggled with public misstatements for decades.

“I am a gaffe machine,” Biden granted in 2018. “But my God, what a wonderful thing compared to a guy who can’t tell the truth.”

Biden’s record of forehead-slapping statements includes asking Missouri state Sen. Chuck Graham stand up during a 20 campaign event — before too late that Graham was in a wheelchair.

“Stand up, Chuck, let them see you,” Biden said. “Oh — God love you, what am I talking about? I tell you what, you’re making everyone else stand up, though, pal.”

The president also has a habit of using improper words at awkward points in speeches. During a Middle East trip in July, for example, Biden told an audience in Israel that “we must … keep alive the truth and honor of the Holocaust” before correcting himself to say “horror of the Holocaust.”

Days later, in Saudi Arabia, Biden said during a speech: “We’ll always honor the bravery and selfishness — selflessness of the — and sacrifices of the Americans who served, including my son, Major Beau Biden, who was stationed in Iraq for a year.”

Meanwhile, the president has regularly shared stories that are either false or impossible to verify.

In January, Biden told students at historically black colleges in Atlanta that he was arrested during civil rights protests — for which there is no evidence.

Biden in September 2021 told Jewish leaders that he remembered “spending time at” and “going to” the Tree of Life synagogue in Pittsburgh after the mass murder of 11 people there in 2018. The synagogue said he never visited and the White House later said he was thinking about a 2019 phone call to the synagogue’s rabbi.

Also last September, Biden told an Idaho audience that his “first job offer” came from local lumber and wood products business Boise Cascade. The company said it was news to them and Biden had not previously described an interest in moving to the state.

And In May, Biden said at the Naval Academy’s graduation ceremony that he was appointed to the military school in 1965 by the late Sen. J. Caleb Boggs (R-Del.). A search of Boggs’ archives failed to turn up evidence of the appointment.