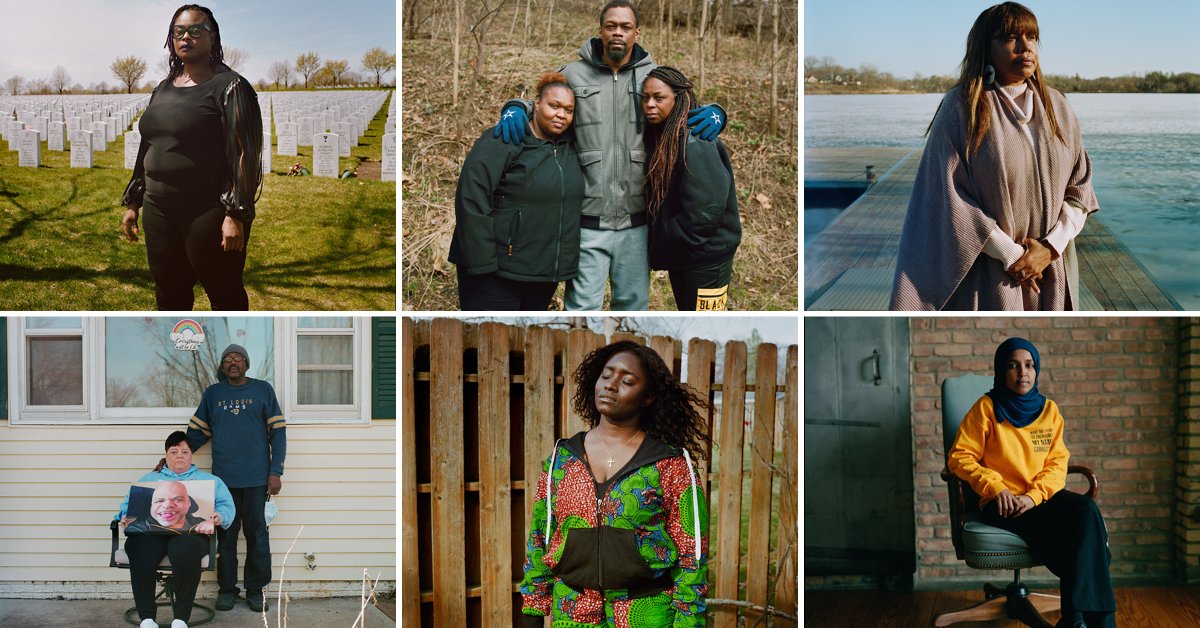 At the start of the COVID-19 pandemic, as hospitals facilitated goodbyes over iPads and funeral homes buried dead without services, families were left with a uniquely isolating grief, devoid of the rituals that traditionally surround death.

For Black Americans, who were 1.9 times more likely than white Americans to die of COVID-19 at the start of the pandemic, this stifled grief fits into a long history of unacknowledged pain. Dating back to slavery, when scientific journals claimed that Black people had higher pain tolerances, to now, as the maternal mortality rate for Black women is 2.9 times that of white women, Black Americans have long faced medical discrimination. The pandemic—and the racial justice reckoning that erupted after the death of George Floyd—only magnified many of the structural inequities that left Black Americans more vulnerable.

In spring 2021, photographer Andrea Ellen Reed drove from Minneapolis, Minn., where she currently lives, to her hometown of Peoria, Ill., to capture photographs and long-form interviews with Black Americans in five Midwest cities who had lost family members to COVID-19. “You don’t always see stories about Black people in the Midwest,” says Reed, who wanted to document people and landscapes that were familiar to her. “There are some really powerful stories of everyday people that wouldn’t necessarily be told.”

In May, the U.S. tallied its 1 millionth reported COVID-19 death. Now, an estimated 9 million families are attempting to move forward without spouses, parents, grandparents, siblings, and children—and often without having been able to truly say goodbye. Below are the stories of some of these individuals in their own words, edited for clarity and brevity.

Minnesota Attorney General Keith Ellison, whose mother Clida Martinez Ellison died on March 26, 2020 at the age of 82. Hers was one of earliest COVID-19-related deaths in the midwest.

Cassandra Greer-Lee, whose husband Nickolas Lee died on April 12, 2020 at the age of 42. Nickolas was a pretrial detainee at Cook County Jail when he contracted COVID-19.

Akeya Watley, whose father, veteran Erving Burkes, died on April 20, 2020 at age 74. Burkes was exposed to COVID-19 while living at an assisted living facility.

Pamela and Roy Clayton’s son Russell Angelo ‘LoLo’ Porter died on April 29, 2020 at 47. LoLo was the third resident to contract COVID-19 in a care facility, where he lived due to disabilities caused by meningitis he contracted as an infant.

Sokonie S. Reed, whose mother Enid Z. Freeman died on May 9, 2020 at age 54. Freeman was a frontline nurse during the early days of the pandemic.

U.S. representative Ilhan Omar, whose father Nur Omar Mohamed died on June 15, 2020 at the age of 67. Mohamed had been traveling in Kenya, and returned to the U.S. just about the time the first cases of COVID-19 in the States were being reported.

Married couple Rosie Ruth Morrow and Jerry Louis Morrow died 12 hours apart, on November 22 and 21, 2020, at the ages of 81 and 63, respectively. Above are their children Steven Harris and Frida Harris-Hobbs, and their granddaughter Saterrica Harris, who recalls how close Rosie and Jerry were.

Francesca A. Armmer, an associate professor of nursing at Bradley University, whose cousin Ruby Diane Booker died on Jan. 7, 2021, at the age of 78. Before her death, Booker was researching African American history and genealogy.

Laverne McCartney Knighton, whose brother Herbert Lee McCartney died on Jan. 16, 2021 at the age of 69. Knighton laments not being able to give his brother a proper farewell.

Theresa Neal’s “sister cousin” Sabra Mitchell, and Sabra’s son Travon, were both hospitalized with COVID-19 in January 2021. On Feb, 1, 2021, at the age of 62, Sabra passed away. That same day, 39-year-old Travon opened his eyes after being in an induced coma and on a ventilator for several weeks.

This project was funded by the National Geographic Society.

To hear in-depth audio recordings of the subjects in their own words visit https://www.andreaellenreed.com/black-covid.

Write to Simmone Shah at simmone.shah@time.com.