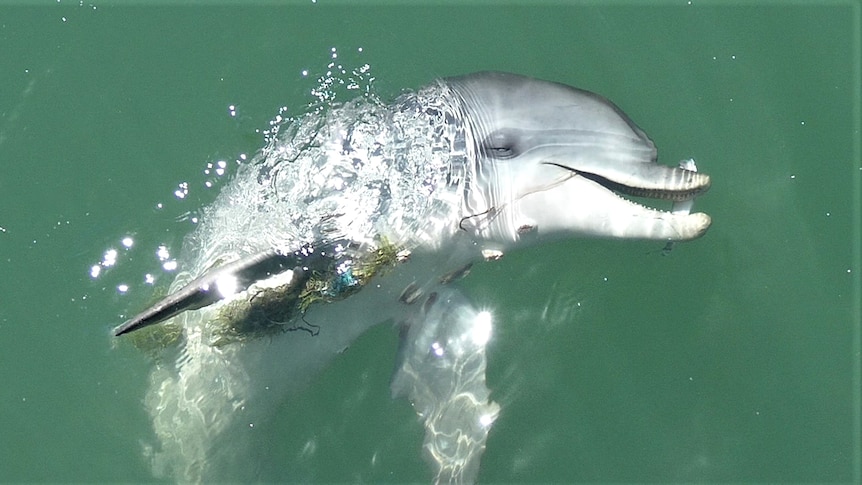 Swimmers are being urged not to enter the water at Ramsgate Beach while two dolphins are frolicking in a swimming enclosure.

The dolphins are believed to have entered the area in Sydney’s Botany Bay on Thursday and have been feeding on fish.

Marine rescue group ORRCA has been monitoring the animals and is concerned about people trying to swim with them.

Ms Farrell said the last thing she wanted to see was someone “headbutted by a dolphin”.

She says the dolphins are behaving normally, but the group is concerned the animals may run out of food and don’t know how to exit the area.

“It’s maybe wanting to go out the same way it came back in,” Ms Farrell said.

“But it’s got other ways to get out where the nets have been pulled up.”

Dolphins free to swim away

In a Facebook post, Bayside City Council said the dolphins were not trapped in the swimming enclosure and the nets had been removed after damage from storms earlier this year.

“It’s such a treat to see them playing so close to the shore,” the post said.

“We want to keep them safe and ensure they enjoy their visit to Bayside.

“Please follow the expert advice so we can all witness this magical moment.”

The nets reach from the high tide mark to the sea floor.

They are designed to keep out sharks and rays, but allow fish to enter and provide habitat for the endangered Sydney seahorse.

Sea Dragon Diving Co is undertaking planning with NSW National Parks and Wildlife Service and ORRCA to remove a section of the nets to give the dolphins another way of leaving the enclosure.

Carl Fallon from Sea Dragon Diving Co said their crews had spotted a dolphin in the area earlier in the week and saw it leave the area on Wednesday night.

Ms Farrell said there were concerns about the use of heavy machinery due to the impact they may have on the dolphins.

“Their hearing is they’re very sensitive,” she said.

“With the heavy machinery that they will have to use, it could cause that dolphin to become distressed.”