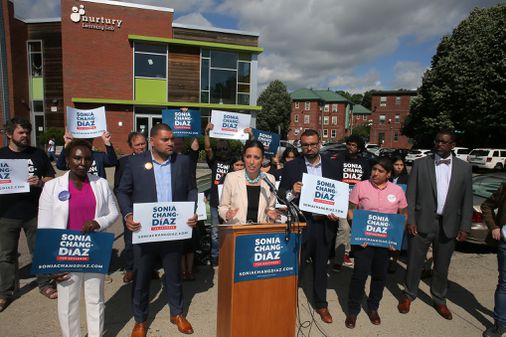 Chang-Díaz, 44, announced her withdrawal exactly one year after she first launched her campaign, when she pitched herself as a progressive reformer who would be a voice for marginalized communities in Beacon Hill’s top office.

But she consistently trailed Healey in public polling and fund-raising, and failed to gain traction among establishment Democrats as well as members of her own Senate caucus.

“I have looked at the numbers every which way,” Chang-Díaz said. “Unfortunately, there is no path I can responsibly lead my supporters on that results in me becoming governor this year.”

Secretary of State William F. Galvin said the deadline for candidates to withdraw from the ballot passed weeks ago, meaning Chang-Díaz’s name will remain before voters on the Sept. 6 primary despite her decision Thursday.

When asked whether she would throw her support behind Healey, Chang-Díaz declined to answer.

“I am focusing my energies on these candidates,” she said, pointing to a slate of down-ballot candidates she is endorsing. “I will support the Democratic nominate in this race.”

Chang-Díaz delivered her announcement outside an early education center in Jamaica Plain, less than three weeks after she qualified for the ballot at the state Democratic Party convention. She had captured fewer than 30 percent of support from party delegates, significantly behind Healey.

The same week, state Senate President Karen E. Spilka — who once stripped Chang-Díaz of her longtime role as co-leaders of the Legislature’s education committee — threw her support behind Healey. The attorney general has risen to the top of public polling and has a $5.2 million war chest and widespread name recognition built from two statewide victories.

Political observers and insiders had varying takes about what’s now effectively become a Healey vs. nobody primary: Some said the strength of Healey’s record and message bulldozed any competition, others suggested the system robbed voters of a meaningful choice.

Marsh, who has been involved with or observed 11 gubernatorial races in the state, was of the first opinion: “The field wasn’t cleared for Maura. Maura cleared the field.”

Since the attorney general announced her candidacy in January, Healey has led Chang-Díaz by every metric. As of the most recent campaign finance reports, her war chest was 16 times larger, and she led a recent University of Massachusetts Amherst / WCVB poll by 32 points.

She also has something Chang-Díaz doesn’t: national name recognition for her work successfully taking on opioid manufacturers and opposing a large swath of Trump administration policies.

“I think [a cleared field] is unusual, but I also think it’s important not to miss the fact that Maura Healey has run a really good campaign,” said Democratic strategist Doug Rubin, who worked on Elizabeth Warren’s successful US Senate campaign and both of former governor Deval Patrick’s elections. “Good campaigns and good candidates win.”

Some experts, however, say the system is designed so that candidates like Chang-Díaz, who run as outsiders, will fail, effectively cheating primary voters of a competitive race.

Chang-Díaz, a veteran on Beacon Hill who would have been the first Latina and Asian American to serve in the corner office, had framed her candidacy as a political outsider, touting her willingness to buck Democratic state house leaders even when it cost her politically.

Danielle Allen, a Harvard University professor and one-time gubernatorial candidate who dropped out the race in February, argued the system doesn’t welcome political outsiders or non-traditional candidates. She predicted Chang-Díaz’s exit will result in a low level of political competitiveness and lower turnout.

Rubin, the Democratic strategist, acknowledged that generally, there are barriers to ballot entry like the ballot access process, fund-raising challenges, or how the media covers candidates who are doing worse in the polls.

However, he said, good campaigns can overcome those barriers.

“I think it’s a shame that Sonia decided not to continue to campaign,” he said. “I think there is a benefit to having a healthy debate on the issues she was raising.”

In a statement, Healey said is grateful to Chang-Díaz’s work as an elected official and as a gubernatorial candidate.

“The legacy of her campaign will live on through the young girls who finally saw themselves represented in a candidate for the highest office in the state,” the South End Democrat said. “I look forward to continuing to partner with Senator Chang-Díaz to bring people together and make Massachusetts work for all of our families.”

Several times as a candidate she recounted her removal from the education committee after failing to reach a deal on a school funding bill in 2018, saying she “held the line” on negotiations. The end product, negotiated by her replacement as committee chair, infused $1.5 billion into the state’s schools over several years.

“Stand up for what you actually believe,” she implored delegates from the stage at this month’s convention. “Vote for action, not just words.”

But neither her actions or words worked in her campaign, during which she struggled to grab attention in the governor’s race, at first overshadowed by questions of whether Governor Charlie Baker would run for reelection (he’s not) and then by Healey’s entrance into the race in January.

She unsuccessfully tried to pressure Healey into a series of debates ahead of the convention, and by the time she entered the DCU Center in Worcester this month, her campaign had spent more than it had raised in consecutive months.

An underdog she always was. “I don’t think there’s been a political endeavor within 13-plus years where I haven’t been an underdog,” she told the Globe last month.

But in deep-blue Massachusetts, where the Democratic bench runs long with ambitious candidates, her decision created a scenario almost inconceivable just ago: It’s Republicans, not Democrats, who’ll have to fight through a contested primary for a chance at an open gubernatorial seat.