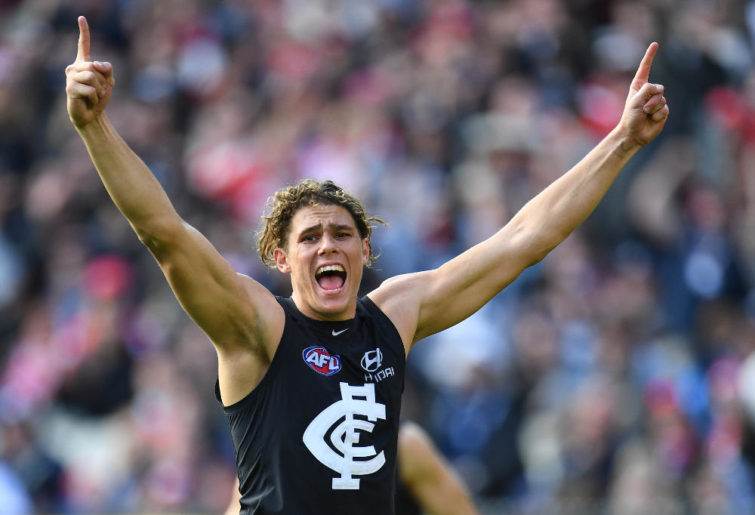 On the eve of round 12, the clubs have played 11 of their 22 home and away games. What better time to put out predictions for the Coleman Medal?

After round 11, the Coleman leader board currently sits:

With five players sitting above the 30-goal mark we could see the Coleman tally shoot north of 70 for the first time since Josh Kennedy in 2018 (80).

Charlie Curnow sits five goals clear and looks comfortable after another four last round. But after delving into the last 10 years of data, they may as well give the medal to Max King now.

There’s no argument that the eventual winner will not be anyone other than the five already named, historically every winner in the last 10 years has been inside the top five at the halfway mark of the season.

Of those 10, seven of them have sat either first or second after round 11 (round 9 in 2020 due to the shortened season).

The worry for Curnow is that his lead has been established due to Harry McKay’s absence, kicking 12 goals in his three solo games so far. With McKay in the side and both players kicking their average goals when playing together, Curnow only leads King by a single goal and McKay sits two back of Hawkins.

With McKay due to return in round 16, Curnow only has three games to gain himself an unassailable lead. He’s also the only player to meet both Fremantle and Melbourne in the run home, who only grants 60 points a game. With the others in the top 5 only coming up against one of the two sides.

For the Cats duo, Jeremy Cameron and Tom Hawkins, their biggest battle will be each other. Whenever two players from the same club were in the top 5 at the halfway point since 2012, not once has either of them won the award. although if any two forward setup could get over the line, it would be this one. The duo has by far the easiest run home in terms of their opposition’s average points against.

Alongside Hawkins’s ability to provide goal assists and Cameron’s mobility up the ground, if one of them wanted to win the award it wouldn’t be too difficult. But with Geelong at 7-4 and chasing a spot in the top 4, it’s hard to imagine individual awards at the top of their minds.

The outlier in the group is Tom Lynch; out for the next 3 weeks with a hamstring, no telling how his form will be right after the soft-tissue injury. He’ll most likely be anywhere from 10-15 goals behind when he makes his return and will likely need to make that up over eight weeks of football.

Lynch had an incredible start to the year, having 7 on the Eagles and 6 on the pies. Unfortunately, he succumbing to an injury at the wrong time of the year. Making up 2+ goals a week as the Tiger’s key forward looks too monumental of a task.

So, now for Max King. Why is he going to win? If the negatives his competitors face in the run home aren’t the biggest reason, they’re second to the volume of shots he gets.

King leads the league in shots on goal, hampered by his accuracy of 52.5%. Even a slight improvement in that accuracy will see him make up the gap to Curnow.

King’s real run home begins in round 19, from which he faces two of the highest conceding teams and the other three concede 12+ goals a week on average.

Facing no teams that are hard to score on in that time. His meetings with Fremantle and Melbourne have produced 10 goals from the two games.

King isn’t impeded by anyone coming into the forward line on the run home, with Jack Steele returning to the midfield only improving the number of inside 50s.

To finish on a prediction that will ultimately look foolish in two weeks’ time. The 2022 Coleman Medal will be awarded to Max King. King will lead C. Curnow, J. Cameron, A. Naughton and T. Lynch to round out the five.