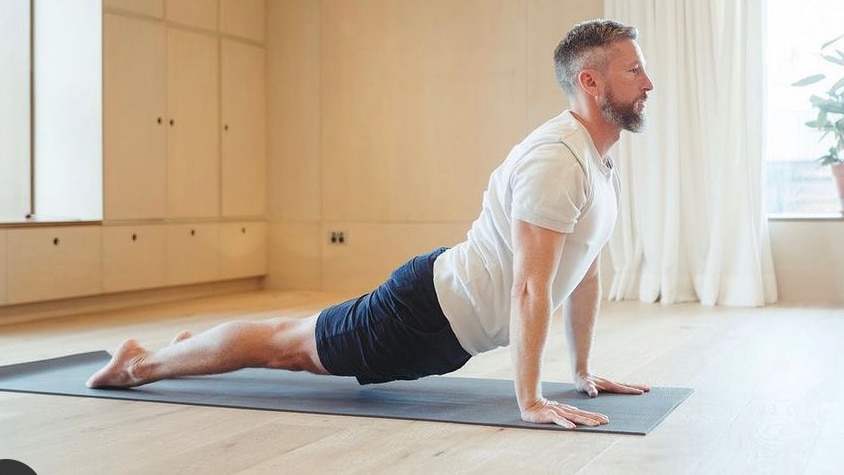 Chris Thompson-Lang spent 14 years in the military as a combat engineer, completing deployments in East Timor and Afghanistan.

It was an experience that would expose him to great harm and leave him indelibly changed.

“In Afghanistan, I was involved in the detection and removal of improvised explosive devices – IEDs,” he says.

Whenever an IED detonated, causing harm to those in the vicinity, Thompson-Lang felt responsible because he hadn’t removed the device in time.

The trauma caused by witnessing injury and death among the people he was there to help had a lasting impact on his psychological state.

“It was yoga that brought me out of that,” says Thompson-Lang, who retrained as a yoga teacher after he left the armed forces in 2015.

How trauma affects the brain

Changes to the amygdala – the brain’s “alarm centre” – can heighten sensitivity to perceived threats.

Trauma can also diminish activity in the prefrontal cortex, an area of ​​the brain associated with executive functioning such as planning and decision-making.

“You’ve got oxygen, glucose [and] blood flow being redirected from the outer cortex in the brain into the central limbic system where you have the amygdala,” says Thompson-Lang.

This state of hypervigilance has damaging health consequences.

“You’re more often in fight and flight [modes]and that is driven by adrenaline and cortisol,” Thompson-Lang explains.

“The production of the cortisol takes away from the body’s ability to produce testosterone and estrogen, and they’re hormones that are required for health, growth and restoration.”

All this means that yoga can be tremendously beneficial for people recovering from trauma — but it might look a bit different from what you’d expect.

Walk into a regular yoga class and you’ll often be greeted by music and the scent of essential oils wafting through the space.

During the class, your teacher might gently move your body to correct your posture.

A trauma-aware yoga class is different.

“We take a lot of stuff out of trauma-aware yoga, [for example] strong sensory inputs like oil, incense, candles, music, and we don’t touch the participants,” Thompson-Lang says.

To lead a trauma-aware yoga class, the teacher must understand the way trauma impacts the brain and the body, and “how those changes drive the way that the nervous system responds to sensory inputs or stimuli,” he says.

“What we know about people who have experienced trauma is that their perception of threat changes. We’re trying to reduce potential for triggering a stimulation of the sympathetic nervous system or the flight and fight response.”

“By targeting the breath and using the breath to calm the nervous system, using movements that stimulate the circulation of hormones throughout the body, it gives the body the ability to heal,” says Thompson-Lang.

“Not only physical injuries but also rewiring or undoing some of the damage that may have happened to the brain as a result of the traumatic experience.”

“If you were to breathe in and never breathe out, that’s what trauma is like,” says Hannah Perkins, a trauma-aware yoga therapist who runs Love This Moment in Newcastle, New South Wales.

Perkins, who offers one-on-one sessions and group classes, says we accumulate stress in our bodies.

Unrelieved stress “can lead to chronic pain or psychological problems,” she says. “Yoga is a practice that continually allows us to make contact with the body, relieve some of that stress and tension and let it go.”

Perkins is very conscious about creating a safe space for her clients.

“I very rarely put hands on people but if I were to, I would always ask for consent and check if that’s OK with the person,” she says.

“I always offer suggestions rather than cues or instructions, and I’m always very invitational in my language, saying things like, ‘you may like to do this’.”

Perkins says for many, yoga is the ticket to peace and self acceptance.

“What I see in all my classes is people learning to love the body they’re in and the life they have, starting to appreciate the present moment, not being locked in their fears or thoughts about the past, but also not feeling as threatened by the uncertainty of the future.”

Like Thompson-Lang, Perkins was drawn to trauma-aware yoga through experiencing trauma herself. She grew up up to violent household, and she also treated in a treatment for cancer in her twenties.

“Yoga practice has been a huge part of my healing,” she says.

Today, yoga is part of Perkins’ daily routine, “whether it’s a full hour-long practice or … it might be 10 minutes chanting in the bathroom.”

She says she feels the best she has ever felt, even in the wake of two years made challenging by the pandemic.

“I wouldn’t be able to live without this practice in my life because when something does happen that’s stressful or challenging, I have tools and I’m aware enough to know that I need to do something to counter-balance that energy that’s locked in the body.”

Triggered by a child’s cry

When he came back from Afghanistan, Thompson-Lang struggled to adjust to life back in Australia.

The sound of his children crying triggered panic and disturbing flashbacks.

“I was at the point when I couldn’t even be around my kids because if they were distressed at all, I would go into full fight and flight mode, and I just needed to get out,” he says.

His family life suffered, and his marriage broke down.

One day, he was on his way to the pub with just $20 left in his pocket before the next payday.

“I was genuinely concerned that $20 wasn’t enough to get me drunk enough to be able to sleep,” he recalls. “I knew I needed to try something new.”

At that moment, he spotted a sign on the street advertising 10 days of yoga for $20. “I walked in and that was it,” he says.

“That first class was amazing. All I could focus on was the instructor, trying not to snap myself and trying to stay balanced. At the end of it, I went home and slept a little bit better, and I went back the next day .”

Thompson-Lang finished the 10-day trial and signed up for another six months. “I bought myself a yoga mat, so I was pretty serious then,” he says. “It pulled me out of such a bad place.”

Life after the military

Thompson-Lang was eventually diagnosed with PTSD after a stint in hospital and received a medical discharge from the military.

He found the transition back to civilian life difficult. “It’s challenging for everyone,” he says. “We’re in the middle of a Royal Commission into veteran suicide, right, and that was the reality for me at one point.”

A lack of direction plus uncertainty around family and finances left him feeling dangerously low. “I got to the point when I seriously considered taking my life,” he says.

“When I came out of hospital, when I couldn’t work, the routine of going to yoga is what kept me going.”

Through yoga, he learned to calm his nervous system.

“If I noticed I was starting to get a little bit heightened because of [my kids] crying or other sensory inputs, yoga gave me the tools to first notice it, and then to be able to do something with it using my breath, using postural alignment, using gentle stretching.”

As a result, he was able to regain a relationship with his children, who are now 13 and 11.

He also believes yoga helped him overcome a cognitive impairment caused by his traumatic experiences in Afghanistan.

“I couldn’t read a sheet of paper and remember what I’d read. I had to go back to the top, and it was extremely frustrating,” he says. “It prevented me from being able to do anything effectively in my role as a leader in the military.”

Now, he says, “I’ve regained that cognitive capacity and I’m back, leading a workforce larger than I ever have in the medical field.”

In 2016, Thompson-Lang helped start Frontline Yoga, an organization that provides support to first responders, emergency services and current and former members of the armed forces.

Frontline Yoga has recently announced a partnership with Invictus Australia as the organisation’s official yoga provider, contributing activities to the ZERO600 fundraising and wellbeing campaign.

Thompson-Lang says yoga can serve as a valuable precursor to talk therapy for people exposed to occupational trauma.

“If you’re in that state of fight and flight, the brain’s not functioning the way it normally does and it’s hard to dig into complex problems … without first addressing what’s happening with the nervous system and bringing that part of your brain, the prefrontal cortex, back online to be able to engage effectively with a therapist.”

He says several of his yoga students have revealed that, like him, “they were contemplating suicide because of the level of distress and unease that was in their body.

“They said, ‘you saved my life’. That’s what drives us forward.”

RN in your inbox

Get more stories that go beyond the news cycle with our weekly newsletter.