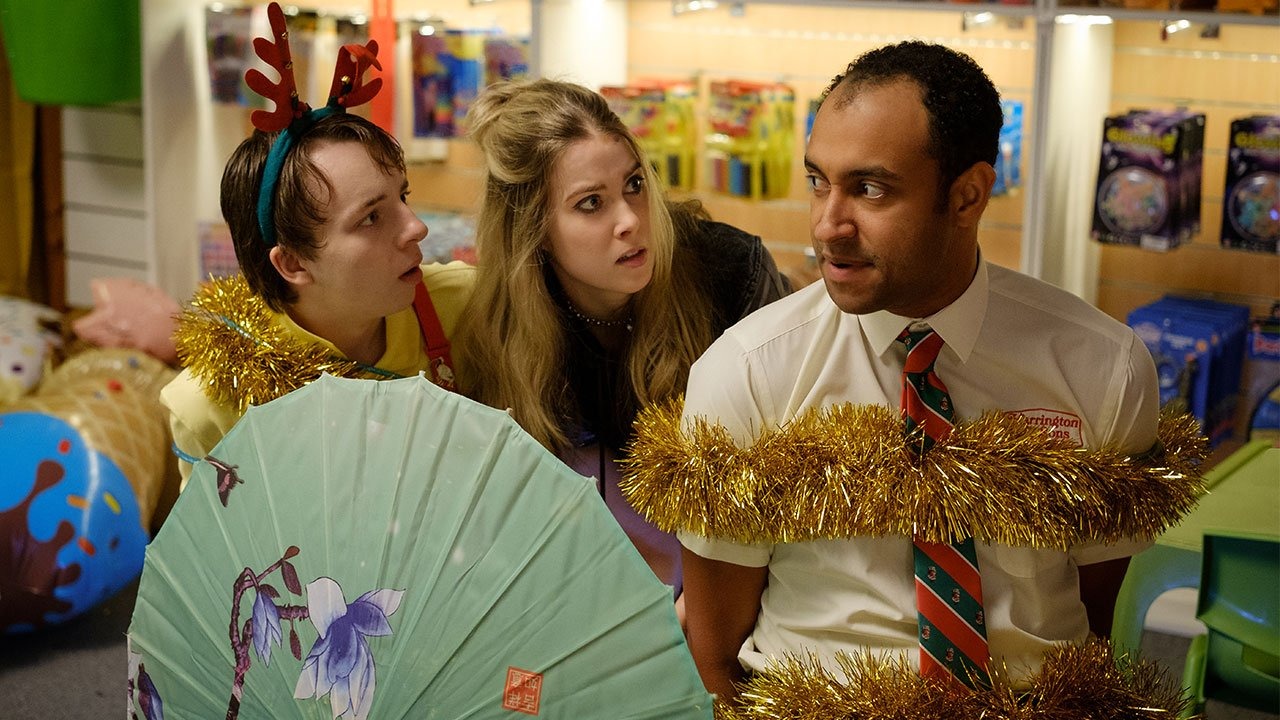 There’s something about the wintry quality of so much Christmas iconography – snow, mistletoe, fireplaces – that just doesn’t gel with the Southern Hemisphere. So it’s not really that strange that Australian Christmas films have been so few and far between.

There is, of course, the classic adventure Bush Christmas from 1947 (starring Chips Rafferty), its remake from 1983 starring Nicole Kidman, and Crackers, from 1998. But until a few years ago, aside from a handful of cartoons and solid Christmas horror thrillers, festive offerings have been rare in Australia.

Stan has been doing something about this, with 2020’s A Sunburnt Christmas followed in 2021 by Christmas on the Farmand now christmas ransom🇧🇷

Derrick Harrington (Matt Okine) is the owner of a toy store that has seen better days.

When crooks Nan (Genevieve Lemon) and Shez (Bridie McKim) hold Derrick and his lead employee Pete (Ed Oxenbould) at gunpoint, demanding a ransom from Derrick’s well-heeled sister Terri (Vivienne Awosoga), it is up to pregnant security guard Gladys (Miranda Tapsell) and shoplifters Brady (Tahlia Sturzaker) and Wombat (Evan Stanhope) to foil their evil plans and save the day.

You can tell from the character names how hard Christmas Ransom strains to seem Australian. The opening sequences involve Santa-hat-wearing koalas and a giant blow-up kangaroo Santa, Christmas letters deposited in her pouch.

There are some quirks about Christmas in Australia and, sure, everyone might have a koala ornament or two, but most of the paraphernalia in Australian Christmases is of the generic Northern hemisphere kind. So the effect seems inauthentic, straining too hard.

This is the film’s major weakness – it just tries too hard. It tries too hard to be funny, to be light-hearted, to be Australian and, most of all, to be a cheesy Christmas movie. It’s not particularly effective in any of these aspects.

Straining to be clever

There is something endearingly lame about many of the best Christmas movies. Even critically-acclaimed films like It’s a Wonderful Life and the brilliant 1945 version of Christmas in Connecticut are schmaltzy to a degree that would be seen as a fault in a non-holiday film. The cheesy quality is a major source of their charm.

There are numerous “wink-wink” moments to other Christmas films for viewers in the know – Harrington’s father is named Clarence, for example, recalling the angel in It’s a Wonderful Life🇧🇷 but christmas ransom feels the need to take things one (irritating) step further, making already obvious references explicit.

At one point, Gladys throws a Santa out the window to get the attention of the fire brigade, who think they’ve been mistakenly alerted, directly recalling the similar moment in die hard🇧🇷 Later, Gladys says “so this is what it means to die hard”, spelling out the reference to the infinitely better Christmas ransom film. It’s hard to understand the point – is this meant to be funny? Clever? Is it being deliberately stupid?

Some of the material would have worked well on paper – it’s home alone meets die hard with a dash of The Reffiltered through a daggy Aussie sensibility – and you can understand why the script would have been greenlit.

There are some funny and cute ideas: an assault with a swimming noodle; thieves hiding in a ball pit; hostages tied up with tinsel and Christmas lights. As the camera pulls back to reveal the very ordinary building at the beginning of the film, Gladys’s voiceover tells us Harrington and Sons is “the greatest toy store in the whole wide world – or at least in the greater metropolitan region”.

christmas ransom could appear fresh, engaging, sweet but also clever in its approach to the Christmas movie. There’s romance. There’s action. There’s fractured relationships between partners and siblings overcome by the end. There is a general waning of Christmas spirit that is remedied – a common trope of the genre – with the toy store transformed into the kind of thriving wonderland of movie-world (think the toy store in home alone 2) in the final sequences.

But it all seems rather forced. The kind of comedic overacting that works in films like the Hulk Hogan-starring Christmas masterpiece Santa With Muscles doesn’t pay off here. The numerous fart jokes may appeal to very young children, but probably not many others. The music labors to keep us engaged, but it also seems deliberately hammy and thus pointless in a film that isn’t quite committed to being a spoof.

The good and the bad

This is not to suggest it’s not worth watching. In fact, I quite enjoyed watching this terrible Aussie Christmas film.

For aficionados of Christmas cinema, the good and the bad, christmas ransom is light-hearted and silly enough to be bearable. There are some endearingly daggy zany moments and the lameness of much of it isn’t necessarily a problem for this kind of fare. But it just doesn’t work as well when it tries to be clever, because it’s not.

And even if its 83-minute run time seems overlong, it compares favorably with much of the other straight-to-streaming Christmas films – next to Santa Girl it looks like vertigo – and it’s fun watching a bad Christmas film from Australia for a change.

Christmas Ransom is on Stan.

Ari Mattes is a lecturer in Communications and Media at the University of Notre Dame Australia. This article is republished from The Conversation under a Creative Commons license. Read the original article.