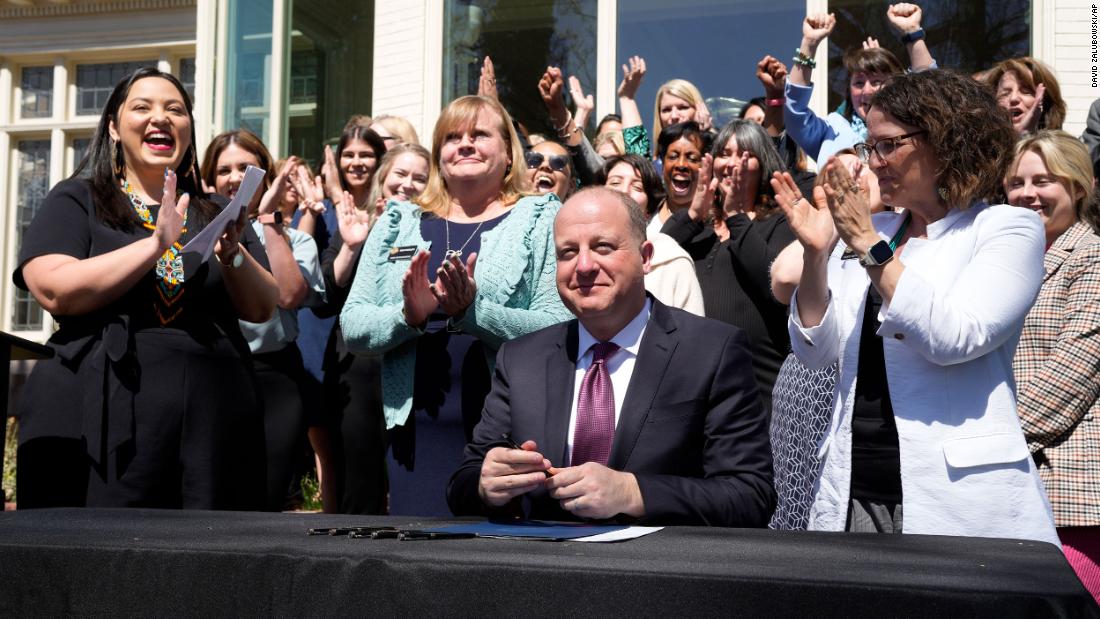 House Bill 1279, the Reproductive Health Equity Act, states that “every individual has a fundamental right to make decisions about the individual’s reproductive health care, including the fundamental right to use or refuse contraception; a pregnant individual has a fundamental right to continue a pregnancy and give birth or to have an abortion and to make decisions about how to exercise that right; and a fertilized egg, embryo, or fetus does not have independent or derivative rights under the laws of the state.”
Polis’ signature follows a flurry of recent restrictive abortion laws advanced by Republican state legislatures across the country.
The bill, which passed in the state’s Democratic-majority House and Senate last month on party-line votes, also prohibits local entities from implementing their own restrictions.
“In the State of Colorado, the serious decision to start or end a pregnancy with medical assistance will remain between a person, their doctor, and their faith,” Polis said in a statement on Monday.

The existing governor emphasized that the new law “does not make any changes to the current legal framework,” saying: “This bill simply maintains this status quo regardless of what happens at the federal level and preserves all constitutional rights and obligations.”

The US Supreme Court appears poised to uphold a Mississippi law that bars abortion after 15 weeks. The fate of Roe v. Wade, the landmark 1973 Supreme Court decision that legalized abortion nationwide, also hangs in the balance, and anti-abortion activists are hopeful that the court’s conservative majority will strike it down.

Florida, West Virginia, Kentucky and Arizona have all moved on 15-week abortion bans this session. And Idaho has imposed a six-week abortion ban, which was the first such bill signed into law this year that mimics a controversial Texas law.
Colorado House Majority Leader Daneya Esgar, a sponsor of the bill, said in a statement that “enshrining the right to choose when it comes to reproductive health care, including the right to abortion, shows we trust Coloradans to make their own medical decisions.”