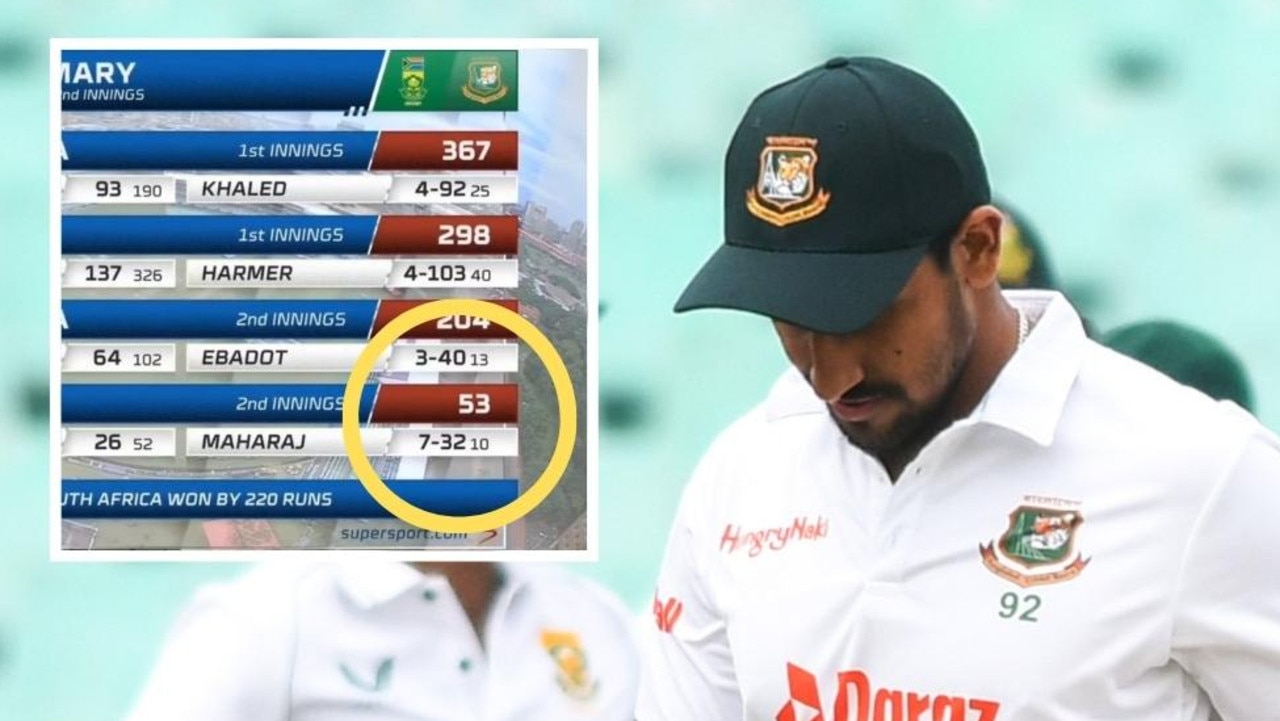 Bangladesh has been bowled out for its second-lowest score in Test history, rolled by South Africa for 53 on the final day in Durban.

Bangladesh has been bowled out for its second-lowest score in Test history, rolled by South Africa for 53 on day five of the series opener in Durban.

Chasing a target of 274 for victory, Bangladesh lost 10 wickets in less than 18 overs as the Proteas secured a convincing 220-run win in the first Test at Kingsmead.

Najmul Hossain Shanto top-scored for Bangladesh with 26, with only one teammate registering more than five runs in the second innings. The last seven wickets tumbled in less than an hour, with four ducks on the scorecard.

It was the lowest team score at Kingsmead in Test history.

South African spinners Keshav Maharaj and Simon Harmer combined to take all 10 wickets, bowling in tandem from either end unchanged.

As revealed by cricket statistician Andrew Samson on Twitter, it was the first time South Africa had bowled a team out using only two bowlers in its 133-year Test history.

Meanwhile, Bangladesh team director Khaled Mahmud called for the return of neutral umpires after the defeat, with a handful of on-field decisions going against the visitors during South Africa’s second innings.

“A few decisions went against us, which if they had come our way, we would have probably been chasing 180 runs instead of 270,” he said.

“We of course respect umpires … But to be frank, I saw such inconsistent umpiring after many days.

“Now the whole world has opened up, hopefully the ICC will consider giving neutral umpires.”

Bangladesh all-rounder Shakib Al Hasan tweeted: “I think it’s time for #ICC to back to neutral umpires as Covid situation is ok in most cricket playing countries.”

ESPNcricinfo reports Bangladesh will lodge an official complaint about South Africa’s “deplorable” sledging and the overall umpiring during the Durban Test.

“They surrounded (Mahmudul Hasan) Joy when he went out to bat,” BCB cricket operations chief Jalal Yunus told the website.

“They were saying something. He couldn’t say anything back since he is a junior player. It was deplorable. Instead of controlling the situation, the umpires warned our players whenever we made complaints against the sledging.

“Sledging definitely took place from both sides, but when they started it and took it overboard, we complained to the umpires. It wasn’t acceptable. We properly condemn it. We have to accept the umpires’ decisions, but the ICC must reinstate neutral umpires.”

Left-arm spinner Maharaj finished with figures of 7/32 from 10 overs at his home ground, his second-best bowling performance at Test level.

Bangladeshi captain Mominul Haque said Bangladeshi batted “really well” in the first innings when they made 298, but played too many loose shots in the second innings, failing to build.

“We are used to playing spin in Bangladesh and we also know that (in) Durban the spinners work,” Haque lamented at the post-match presentation.

“We didn’t look for the result.”

“Even if the IPL guys were available, Keshav and Harmy would have bowled most of our overs,” Proteas captain Dean Elgar said after the win.

“It’s not the style of cricket we’re used to, or that we want to play. I think it shows a lot of character … that we have the resources to adapt.

“We still want to play the conditions where you play three seamers, an all-rounder and a spinner. Fast bowling is our prime source of attack.

“I’m trying to expose our players and to get them familiar the way I want to play Test cricket. It is about playing positive, ruthless cricket, making bold, rash decisions and putting players out of their comfort zones. That was purely a gut feel of mine.

“Test cricket demands intensity whether you’ve got bat in hand or ball in hand. Maybe it was the inexperience of players not quite familiar with that role. Now the guys have experienced a taste of Test cricket and what it demands.”

The second and final Test starts in Gqeberha, formerly Port Elizabeth, on Friday.