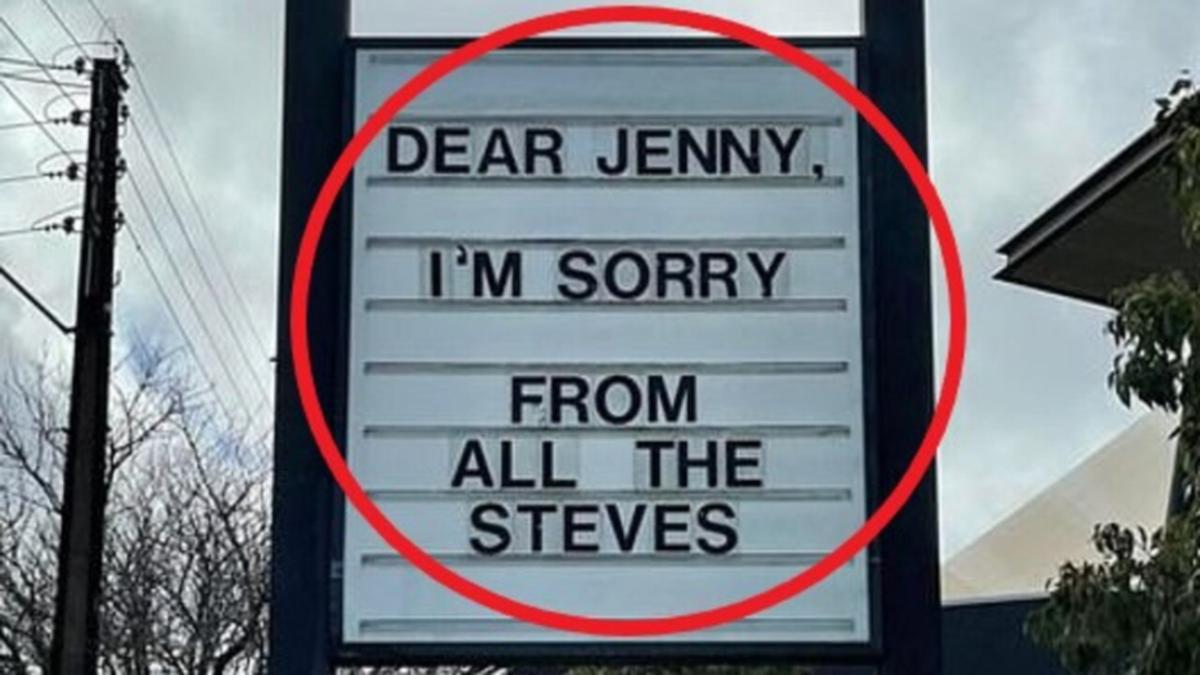 The mystery surrounding a fiery message in a local newspaper which captured Australia’s attention has deepened after a pub came forward to apologise to the scorned woman.

The “filthy” cheating actions of a man named Steve was printed for everyone to see, with readers of Mackay and Whitsunday Life in Queensland’s east getting a shock in their Friday edition of the paper.

A full-page advertisement, costing between $1500 and $2000, was printed on page four from a scorned lover called Jenny.

“Dear Steve, I hope you’re happy with her,” the open letter read.

“Now the whole town will know what a filthy cheater you are. From Jenny.

“PS I bought this ad using your credit card.”

The note has since gone viral, with an Adelaide pub posting a hilarious response to Jenny on its roadside sign.

“From all the Steves.”

Mackay and Whitsunday Life have been inundated with “dozens” of messages since the full-page note went to print on page four.

“We don’t know who Steve is, but apparently he’s been very, very bad,” a newspaper representative said.

“We won’t be revealing any details about Jenny.”

But, the last part of Jenny’s revenge seems to have been unsuccessful.

“We have not charged the credit card in question,” the Mackay and Whitsunday Life representative said.

The newspaper’s sales manager Mike McCann told the Today Show on Saturday it held off charging the credit card provided as it could technically have been card fraud.

However, he was urging Steve to come forward and “cover” the bill.

Mr McCann said staff at the paper thought the ad was “just crazy” and the response since had been phenomenal.

Jenny’s actions were met with praise from the legion of new-found fans.

“Jenny sounds like someone I want to be friends with,” one person said.

“Not all heroine’s wear capes. Jenny is my new favorite person,” said another.

“Couldn’t love this more if I tried LOL… Good on you Jenny,” proclaimed another amused commenter.

Members of the public were not as kind to Steve.

“Never trust a Steve,” one said, while another said they “would have charged the card.”

“Everyone who knows a Steve and Jenny has suddenly sat up and taken notice,” another person joked.

But, not everyone was convinced.

Some claimed Jenny and Steve did not exist at all and the ad was a clever marketing tactic.

“This has PR stunt written all over it,” one user wrote.

“Good way of getting more likes and readers to your page,” another said.