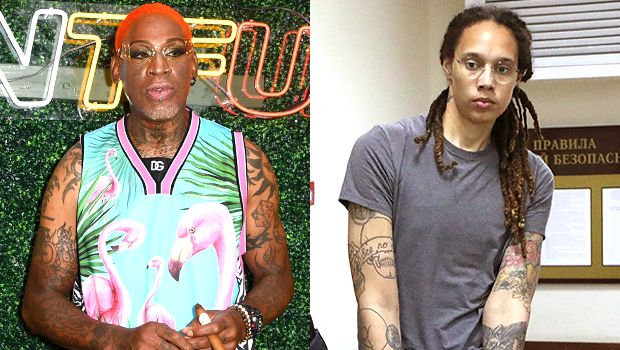 Dennis Rodman has a plan to release Brittney Griner from a Russian jail. The basketball icon revealed that he’s planning to go to Russia himself, in a new interview with NBC News on Saturday, August 20. While he didn’t disclose his plans on freeing Brittney weeks after she was sentenced to nine years in prison, he did say that he was working on making his trip soon.

Dennis, 61, said that he’d gotten the okay to fly to Russia to negotiate the WNBA player’s release, but he didn’t offer many details. “I got permission to go to Russia to help that girl,” he explained to NBC. “I’m trying to go this week.” Even though he said he was authorized, an official for President Joe Biden told the outlet that the administration had already made “a significant offer,” and the basketball player’s efforts may actually hurt Brittney’s chances of being released. “Anything other than negotiating further through the established channel is likely to complicate and hinder release efforts,” they said.

If Dennis does go to Russia, it won’t be the first time that he’s served as a liaison between the United States and a foreign power. The former Chicago Bulls player’s friendship with North Korean Supreme Leader Kim Jong-un has been well-documented. He’s made multiple visits to the country since 2013.

Brittney, 31, was sentenced to nine years in prison after she was found guilty on August 4. Her lawyer Maria Blagovolina the WNBA player’s feelings revealed in a statement to People. “She’s devastated. She she is very upset and she’s honestly quite shocked, so she needs to digest what happened today,” she said.

As the official explained, it’s been reported that the Biden administration made an offer to Russia to get Brittney and fellow US citizen Paul Whelan returned to the US in exchange for Victor Bout, a Russian arms dealer who has been serving a 25-year sentence in a US prison, per CNN.

Brittney Griner: 5 Things About The WNBA Star Who Pleaded Guilty To Drug Charges In Russia