The event in question occurred after an Instagram user, @philly.diva aka Kristen Dionne posted an image from Twitter displaying side-by-side images of Diana in an attempt to show how much the RHOBH star’s looks have changed over the years, hinting at a lot of plastic surgery work has been performed on her.

The original image was captioned: ‘My mind can’t comprehend that this is the same woman.”

Things took a hard left when @philly.diva’s reposted caption caught Diana’s attention and the two got into an online argument in which Diana allegedly unknowingly used some very insensitive and racist comments.

The post read, “Uuhhhh I guess the first @sdjneuro was the one that shopped in stores and the 2nd is allergic to dust and doesn’t know what an outlet is 😆😆.”

Diana quickly jumped in the comments section and claimed that the photos were taken years apart, that she was always much thinner at the time, and even accused the photos of being photoshopped.

Understandably fans are shocked and angry.

The comment also got noticed by RHOBH costar, Crystal Kung Minkoff, who has also been embroiled in a racial feud, with Sutton Strakeover a “dark” remark Sutton allegedly made last season.

Now, Diana is on Crystal’s radar as Diana posted that she woke up to a phone call from a “screaming” Crystal demanding to know what Diana meant by the comment. 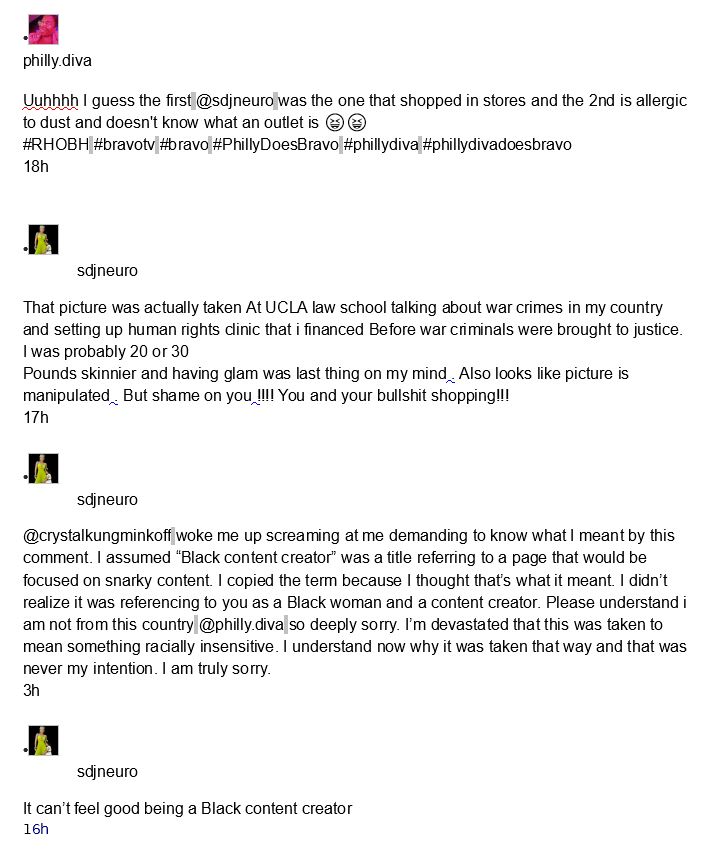 Diana has since apologized saying that she thought the word “black content” referred to a “title referring to a page that would be focused on snarky content.” She also said that she didn’t realize it was negatively aimed at “you [Kristen Dionne] as a black woman. Please understand I am not from this country…so deeply sorry. I’m devastated that this was taken to mean something racially insensitive.”

Viewers know by now that Diana’s English isn’t the best, but still, judging by most fan’s reactions — they seemed skeptical of Diana’s explanation.

One posted, “This is soooo out of line. Bravo needs to see this, ”adding,“ I truly hope this gets back 👏 her comment dela was distasteful and out of line. She’s [email protected]! She just exposed her hand.”

While another remarked, “Ur [sic] know ur done for this comment.. right???”

The third chimed in saying, “Wow! being a housewife, the audience generally weighs in since it’s for our entertainment. Memes are the smallest thing. It may not feel good, but I can’t imagine resulting to racism?? What the hell was that comment???”