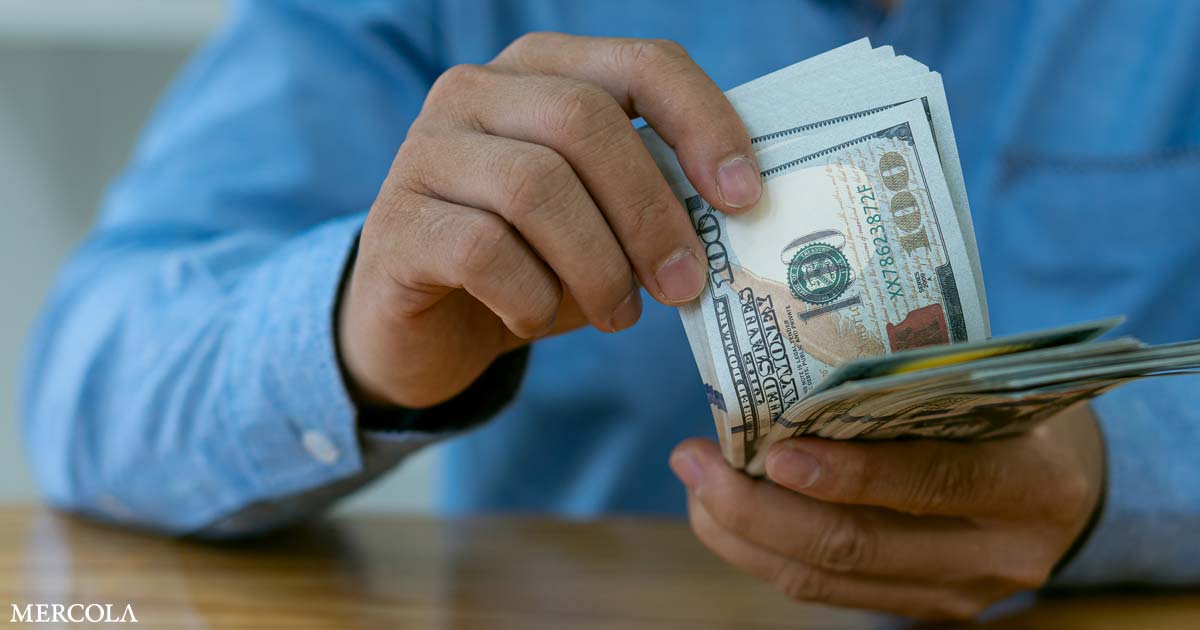 US federal law prohibits the use of “official resources,” such as federal funds or one’s job title, for private gain, be it your own gain or someone you know. A recent investigation has unveiled evidence showing Dennis Carroll, former director of the United States Agency for International Development’s (USAID) Pandemic Threat Program, may have done just that. As reported by investigative journalist Paul Thacker:1

‘It would appear that Dennis Carroll violated federal law that prohibits the use of official resources for private gain or for that of persons or organizations with which he is associated personally,’ Craig Holman of Public Citizen said when shown emailstwo made public by the nonprofit US Right to Know.

‘Official resources — including government means of communications, government-funded travel or even the use of one’s official title — may not be used to promote private interests, such as the Global Virome Project.’”

US Right to Know (USRTK) obtained the incriminating documents3 through the Freedom of Information Act (FOIA) request. According to USRTK,4 it appears Carroll first designed the PREDICT program as a proof of concept for the Global Virome Project, and while he was receiving six-figure paychecks ($166,500 in 2019) from the USAID, he then founded, promoted and raised funds for the Global Virome Project , in some instances using USAID funding to do so.

Goals of the PREDICT Program and Global Virus Project

The USAID PREDICT program involved identifying viruses with pandemic potential. Contractors funded through this program have included the EcoHealth Alliance, headed by Peter Daszak who, incidentally, in the last year has also gotten into hot water over potential violations of law.

According to Thacker, in early March 2022, Congressional members sent a letter to the National Institutes of Health (NIH), asking the agency to investigate EcoHealth for potential “contract irregularities and anonymous private donations, in violation of federal statute.”

The Global Virome Project was launched to hunt down and catalog previously unknown viruses around the globe. According to USRTK, the Global Virome Project is currently trying to obtain $1.2 billion to fund the collection and identification of more than 1 million viruses from wildlife, with the goal of predicting which ones might evolve to infect humans.

As detailed by USRTK and Thacker, USAID appears to have funded overseas travel to promote and fundraise for the Global Virome Project using PREDICT program monies — all while Carroll was still heading the USAID.

What’s more, emails suggest Carroll may have used his position as USAID director of pandemic threats to build credibility for the controversial Virome Project and get it off the ground. As just one example, in an August 2017 fundraising pitch, one of the Global Virome Project board members stated that the idea for the project was “championed by the USAID Emerging Pandemic Threats Division.”5

Based on the emails obtained, it appears the USAID Pandemic Threats Division, under Carroll’s direction, has funneled at least $270,969 to the Global Virome Project.6 However, it could potentially be hundreds of thousands of dollars more.

One email states that the Virome Project’s budget was overdrawn by $118,000, and that a $116,000 unobligated subaward earmarked for Columbia University was offsetting the overdraft.

That email also referenced a $341,000 subaward that would be given to Metabiota for a cost-benefit analysis once “the balance of our Y5 [year 5] obligation is received from USAID, but please let me know if this is unacceptable, and I’ll see what can possibly be done (creative accounting required).”7

Walter Shaub, former director of the Office of Government Ethics called the evidence “troubling,” Carroll’s use of a USAID email address is prohibited if the Global Virome Project is not a government project, but his own.8 Kedric Payne, senior director of ethics with the watchdog group Campaign Legal Center, also commented, telling USRTK:9

“The law is clear that officials cannot use government resources to benefit themselves or prospective employers. If Carroll was involved in decisions benefitting GVP while he was at USAID, it is likely that he needed approval from the agency’s ethics officials. The public has a right to know if their public officials comply with conflict of interest laws.”

Similarly, Scott Amey, general counsel for another watchdog group called the Project on Government Oversight, stated, “There’s [sic] numerous conflicts of interest laws that should be investigated here to ensure that Carroll did not violate the laws of the books.”10

Carroll’s Work on the Two Projects Overlapped for Years

While Carroll has publicly stated that he founded the Global Virome Project after he retired from USAID, this does not appear to be the case. While it’s still unclear when Carroll actually retired from USAID, the Los Angeles Times reported that PREDICT was shut down in September 2019, and according to The New York Times, Carroll retired when PREDICT shut down.

“Carroll organized calls and meetings on the project’s work with other co-founders, sought donations and helped refine fundraising pitches, pushed favorable favorable messages in the press, and consulted on its application for tax-exempt status with the Internal Revenue Service — all while still working for USAID,” USRTK reports.13

“Whether or not Carroll is currently receiving profitable compensation as chair of the Project is beside the point. [He] can still be held liable, even though he has left federal service. The Inspector General’s office should investigate whether the law was broken and, upon finding probable cause, refer the case to the Department of Justice for prosecution.”

On a side note, the FOIA documents also reveal a connection to the Wuhan Institute of Virology (WIV) in China. It appears the USAID PREDICT program funded laboratory equipment for the WIV through grants to the EcoHealth Alliance.

Of course, we also know that EcoHealth Alliance funneled funding from the National Institutes of Health to the WIV by subcontracting research to them. According to USRTK, Shi Zhengli, a top coronavirus researcher at the WIV, not only worked with PREDICT but was also slated to work with the Global Virome Project.

In one March 2019 email from Daszak to someone at USAID (the recipient’s name has been redacted), Daszak notes that lawyers had flagged the overlap in Carroll’s role at USAID and the Virome Project as potentially problematic, and had suggested changes to a board of directors ‘ letter.

The details of what were changed have been redacted, but Daszak’s comment seems to imply that they’re aware that what they’re doing is not quite right. Daszak wrote: “I realize this isn’t the language you wanted, but it’s safer for us at this sensitive point where we still receive USAID funding … for GVP related activities.”15

Lofty Goals That Have Resulted in Nothing

While Carroll has described the Global Virome Project as “the beginning of the end of the pandemic era,”16 critics have pointed out that the premise behind it brings more risk than reward. Michael Osterholm, director of the Center for Infectious Disease Research and Policy at the University of Minnesota told USRTK:

“If I thought there was a kind of ‘viral smoke alarm,’ I would invest everything imaginable in that, but this project doesn’t give us that… Deep knowledge about Zika and Nipah has still not led to proven vaccines against them …

Show me one thing they’ve done that has made a difference, where they could even make a case that they supposedly prevented a pandemic. Which one did they prevent? Did they find anything that helped us with this coronavirus?”

Other critics include University of Sydney evolutionary biologist and virologist Edward C. Holmes, University of Edinburgh virologist Andrew Rambaut and Scripps Research virologist Kristian G. Andersen. In a 2018 Nature article17 titled “Pandemics: Spend on Surveillance, Not Prediction,” the trio wrote that the Global Virome Project is unlikely to predict or prevent future pandemics because animal viruses rarely cause epidemics in humans:

“Around 250 human viruses have been described, and only a small subset of these have caused major epidemics this century. Advocates of prediction also argue that it will be possible to anticipate human how likely a virus is to emerge in people on the basis of its sequence, and by using knowledge of how it interacts with cells (obtained, for instance, by studying the virus in cell cultures). This is misguided.”

Other curious connections that are emerging from this story revolve around Metabiota, which was a core partner of the USAID PREDICT project, and later contracted to perform a cost-benefit analysis for the Global Virome Project. As detailed by the Daily Expose:18

• One of Metabiota’s investors is Rosemont Seneca,19 an investment fund co-managed by Hunter Biden.20

In an exclusive report,21 the Daily Mail recently reported that evidence found on Hunter’s laptop confirms that he helped secure “millions in funding” for Metabiota, a US contractor in Ukraine “specializing in deadly pathogen research,” which is what the Russian government on March 24, 2022, had claimed during the press conference.

• Neil Callahan is a cofounder of Rosemont Seneca Technology Partners, and he not only sits on Metabiota’s board of advisers, he also cofounded Pilot Growth Management, which is Metabiota’s primary investor.

• Another Metabiota funder is In-Q-Tel, a CIA venture capital firm that specializes in high-tech investments that support or benefit the intelligence capacity of US intelligence agencies.

• Metabiota is also funded by the US Department of Defense’s Threat Reduction Agency (DTRA) to operate biolabs in Ukraine.

The founder of Metabiota, Nathan Wolfe, also has ties to the World Economic Forum (WEF), which is driving The Great Reset agenda. He’s a WEF Young Global Leader graduate and was awarded the WEF’s Technology Pioneer award in 2021.

Wolfe has served on the EcoHealth Alliance’s editorial board since 2004. In 2017, he cowrote a study on coronaviruses in bats together with Daszak (EcoHealth). Wolfe has also received more than $20 million in research grants from Google, NIH, the Bill & Melinda Gates Foundation and others.

According to the Daily Expose, Wolfe also has ties to a deceased pedophile Jeffrey Epstein. In his 2012 book, “The Viral Storm,” Wolfe thanked friends for their support of him, including Epstein and Boris Nikolic. Nikolic, a biotech venture capitalist, was named “back-up executor” in Epstein’s will.

There are many things here that we, the American people, need to get to the bottom of, starting with the misuse of taxpayer funds. To that end, if you live in the US, I would suggest you contact members of Congress and ask them to investigate22 the potential unlawful actions of Carroll during his time at USAID.

The US Congress has the power to conduct investigations into potential criminal conduct, and if malfeasance is found, they can then refer the matter to the Department of Justice for investigation and prosecution, if appropriate.23 To find out who your Congressman is, and their contact information, see USA.gov.