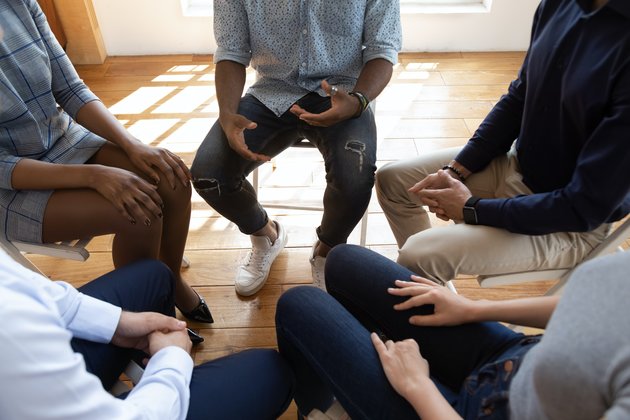 Alcoholics and narcotics anonymous are 12-step peer support groups where people who have alcohol or other drug problems are supported by others who have similar problems (“peers”), rather than professionals. They are called 12-step programs because there are 12 step members are expected to work through.

The 12 steps have a strong religious element including commitments to prayer, making a moral inventory of yourself, making amends to people you’ve harmed, and, once you’ve achieved your “spiritual awakening,” promoting the program to other people in need of help.

Originally designed for people with alcohol and then later other drug problems, they have now expanded to dozens of other compulsive behaviors, including overeating, gambling, sex and hoarding.

Read more: Trying to cut back on alcohol? Here’s what works

One of the upsides of AA and NA groups is they are very accessible. There are groups running every day in many locations.

But do they really work?

How the 12-step movement started

Twelve step programs started in the 1930s. The founders, a stock broker and a surgeon, developed a system of peer support and then formalized the 12 steps, largely drawn from their own and others’ experience of recovery.

The model has remained largely unchanged since then, despite significant advances in our understanding of the brain and of alcohol and other drug problems and their treatment.

It was one of the very early formal treatment options for alcohol problems. It was started around the time of prohibition and the temperance movement when alcohol problems were considered a moral failing.

The 12-step movement took a step beyond the moral view and introduced the idea alcohol and other drug problems were a health issue by framing the problem as a disease.

Read more: Health Check: what makes it so hard to quit drugs?

The movement believed “alcoholism”, as it was commonly known then, was a progressive disease that could never be cured. That meant abstinence was the only solution.

But there have been no serious candidates for gene, brain or personality differences that reliably predict the development or severity of alcohol or other drug problems. Many people who meet the AA definition of an “alcoholic” have successfully returned to controlled drinking.

We know more about alcohol and other drug dependence now

There are now newer models, based on decades of research, that are better at explaining the development of alcohol and other drug problems. So this has put the theoretical basis of the 12-step model into question.

The movement has a lot of dedicated fans but there has also been a lot of criticism.

Many people find the program difficult to complete because of the requirements of participation.

There is a strict adherence to abstinence in the program and for this reason some find the process disempowering (Step 1: “We admitted we were powerless over alcohol – that our lives had become unmanageable”).

There is also a strong religious flavor which reflects the movement’s origins at a time when Christianity was much more part of daily life (Step 2: “We came to believe that a Power greater than ourselves could restore us to sanity”).

Read more: Thinking about taking a break from alcohol? Here’s how to cut back or quit

What’s the evidence base for 12-step programs?

It has been difficult to work out how effective AA and NA are because there has not been a lot of good quality research into them. Many of the results are published by the “fellowship”, as the 12-step movement refers to itself.

And because the 12-step fellowship is by definition anonymous, some members don’t want to participate in studies that might breach the anonymity of the group. The fellowship itself has been, until recently, cautious about allowing interviews or data to be collected by researchers.

It’s also difficult to compare 12-step groups to mainstream treatments, such as cognitive behavior therapy and motivational interviewing because it is now rare for contemporary treatment to be longer than two to three months at a time. Because alcohol and other drug problems are seen by AA/NA as an incurable disease, participation is a lifetime process.

From what we do know, success at maintaining abstinence is fairly low, even according to the fellowship’s own data. One AA study found only 27% of participants were alcohol-free for up to a year (73% relapse rate) and only 13% maintained abstinence for more than five years. These figures are best case because they only include people who were still members of AA, not people who dropped out of the program. Another analysis estimated a 5-10% success rate at best (90-95% relapse rate).

This is compared to an estimated relapse rate of around 40-60% for mainstream treatment.

One of the other criticisms of 12-step groups is that the drop out is quite high – estimated at around 40% in the first year. Mainstream treatment in Australia has a dropout rate of around 34%.

A new type of therapy, with the goal of getting people engaged in 12 step programs and reduce drop out, was developed in the 1990s as part of a large research project.

It’s called 12-step facilitation therapy and is delivered by trained treatment professionals. It shouldn’t be confused with AA, which is a self-help program rather than being a therapist-led. They are quite different.

Research shows when delivered according to a strict manual, it’s as effective as other established therapies for alcohol and other drug problems.

It has been found to be slightly more likely to result in continuous abstinence compared to other treatments. This may be because the goal of 12-step facilitation therapy is always abstinence, while other therapies may support a goal of controlled drinking or harm reduction for some heavy and dependent drinkers.

Are you from 12-step groups work?

If the ideals and goals of 12-step programs appeal to you, it may be able to help maintain abstinence for a period of time. But if not, there is not enough evidence of effectiveness to compel someone to attend.

It is likely the key ingredient in 12-step groups is the peer support, rather than the 12 steps themselves. We know from other types of peer support, and anecdotally from people in recovery, this type of support is helpful and highly valued.

There are other peer support programs now available like SMART Recovery and Hello Sunday Morning, as well as individual peer support workers. These may better suit those who are not aligned with the values ​​and philosophy of AA.

If you are worried about your own or someone else’s alcohol or other drug use, you can contact the national Alcohol and other Drug Hotline at 1800 250 015 for free, confidential advice.