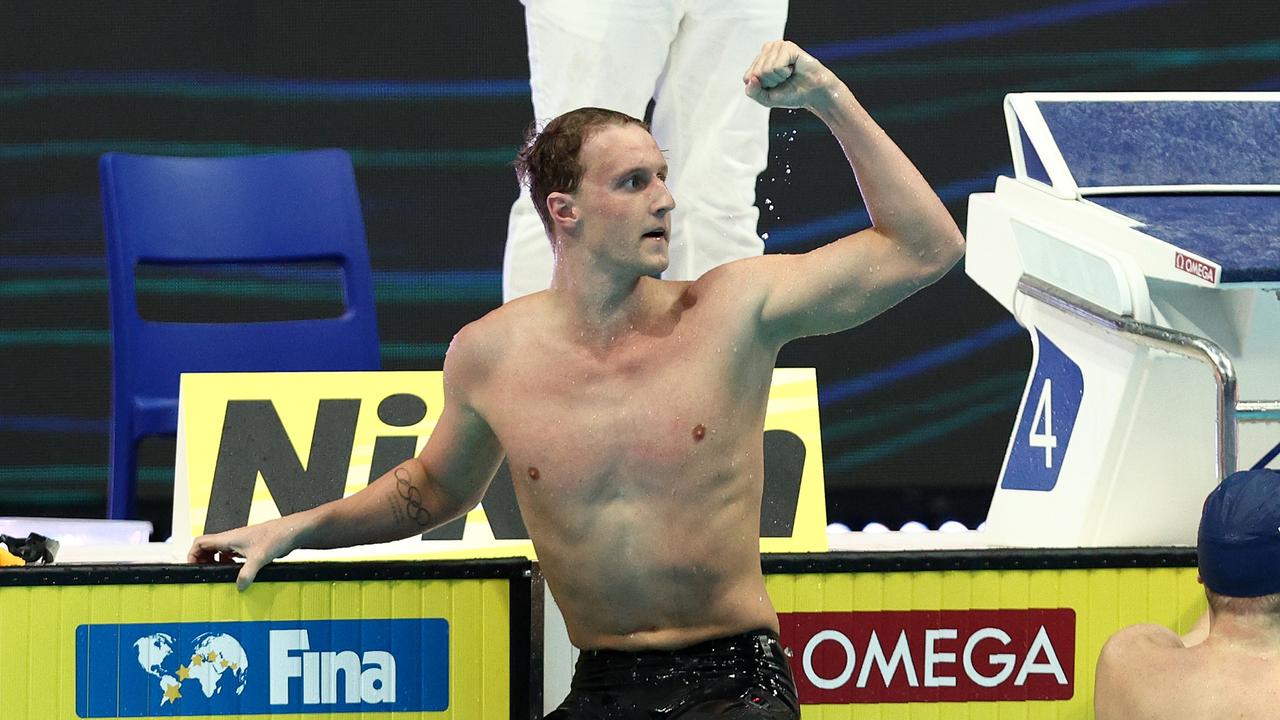 It’s been an excellent first day of the World Swimming Championships for Australia with two golds and some brilliant comebacks.

Elijah Winnington grabbed the first gold of the World Swimming Championships when he pulled away in the last lap to take the men’s 400m freestyle on Saturday in Budapest.

The Australian won in 3min 41.22sec, the fastest time in the event in a decade, to edge German Lukas Martens by 1.63sec with Brazilian Guilherme Pereira da Costa third.

It was a redemption swim for Winnington, who was expected to dominate in the Olympics after overtaking Mack Horton as Australia’s men’s best 400m star.

Winnington had been ranked No. 1 in the world heading into the Games but finished seventh as fellow Aussie Jack McLoughlin’s claimed silver behind Tunisia Ahmed Hafnaoui.

But after that heartbreak, Winnington was determined not to make the same mistakes at the world championships.

“I wasn’t focusing on results,” the 22-year-old told journalists. “You probably saw me walking out, I was looking around and just enjoying the experience, it’s my first world championships, my second international final individual apart from Olympics, so this time around I just wanted to enjoy it and clearly just enjoying it brings out the best in me.”

Heading into the event, Winnington revealed to Newscorp how he nearly quit the sport after his Olympic disappointment.

Qualifying at the Australian titles for the world championships, Winnington’s time would have won him gold at the Olympics but the question was whether he could pull off the big performance on the biggest stage.

“I thought I was a failure,” he told News Corp. “I thought that I not only let myself down, but also my family and everyone in the country.”

Winnington revealed that a chat with Aussie supercoach Dean Boxall turned him around.

Winnington remembered he was struggling in training and Boxall called him up for a chat to ask him about how his life was going.

People don’t know that about Dean. Obviously they know he coaches Ariarne (Titmus) and she swam unbelievably in Tokyo (winning two gold medals) and he’s coached her since she was a little girl so he celebrated her success,” Winnington said.

“But he loves all his swimmers the same and not everyone had that experience but he shares all those emotions too.

“It takes a toll on him but it’s good to know that you have someone that cares about you so much and the month after that conversation was probably the best training week of my life.”

It led to Winnington hiring a mental coach and seems to have set him on the path to become a world champion.

Winnington went out fast and was under world-record pace at both 100m and 200m.

“Fun is fast, and that’s what brought it out tonight,” he said, adding that he went out fast to “bleed” his rivals Martens and Austrian Felix Auboeck.

Martens came through to take the lead after 250m and was ahead after 300m, and 0.8sec inside the world-record split.

In the morning heats, Winnington faded and was caught by Auboeck at the end. This time the Australian had something in reserve and surged past the wilting Martens in the final 50m.

Pereira da Costa surged from fifth to third on the last lap while Auboeck was unable to repeat his blazing finish.

The time was the fifth fastest ever and the best since streamlined body suits were banned.

The victory ended the decade-long Asian domination of the event. South Korean Park Tae-Hwan won in 2011 and China’s Sun Yang took the next four.

US champion Katie Ledecky earned some redemption in the absence of Aussie Ariarne Titmus, winning the 400m freestyle title over Canadian Summer McIntosh.

Australia also had strong performances in the 4x100m freestyle with the women’s team winning gold ahead of Canada and the USA.

In the men’s 4x100m, Australia pulled off a stunning silver behind the US, just pipping bronze medallist Italy as Kyle Chalmers led the team of William Yang, Matthew Temple and Jack Cartwright home with yet another stunning anchor leg.