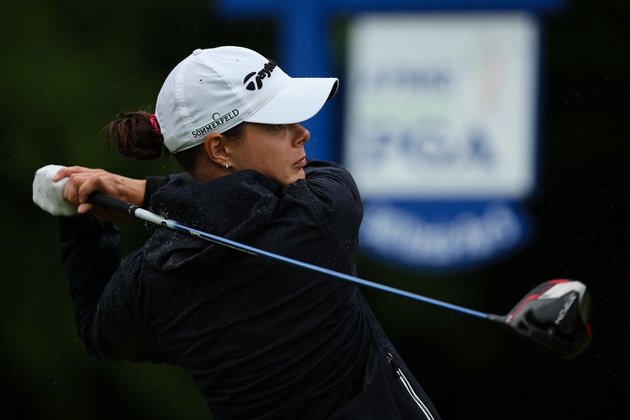 Germany’s Esther Henseleit used a string of five straight birdies to shoot an 8-under-par 64 and tie Lilia Vu for the second-round lead at the AmazingCre Portland Classic on Friday in Portland, Ore.

Vu joined Henseleit at 10-under 134 through two rounds by shooting a second-round 66 at Columbia Edgewater Country Club. They held a one-shot edge over Carlota Ciganda of Spain (66 Friday), with a group of six players tied for fourth two strokes back.

After starting her round with four birdies on the back nine, Henseleit bogeyed the par-4 first but then sank birdies at Nos. 2-6 to shoot up the leaderboard. After one more bogey at the par-3 eighth, she got back to 10 under with a birdie on her final hole, the par-4 ninth.

“I had many chances but they weren’t gimmes. I didn’t have like a tap-in birdie at all,” said Henseleit, who credited her caddy for helping her leave herself straight, uphill putts.

Vu’s highlight was at the par-5 seventh, when she bounced back from her lone bogey of the day with an eagle. She also birdied four of her first five holes.

“It feels pretty good to be in contention here,” Vu said. “The course is a little tighter. It’s not as long, but definitely tight off the tee. I kind of struggled yesterday off the tee. I’m surprised I got away with it and finished 4-under. So just didn’t believe in myself a lot.

“And then today I just showed up and said, you know how good you are. Just believe in yourself.”

Andrea Lee matched Henseleit’s 64 to tie for the low round of the day. With eight birdies and no bogeys, Lee jumped to 8 under for the tournament and a tie with Sweden’s Maja Stark (67), Colombia’s Daniela Darquea (67), China’s Weiwei Zhang (67), Ayaka Furue of Japan (69) and Hannah Green of Australia (70).

Caroline Inglis, a Portland native and member at Columbia Edgewater, got a friendly home-course bounce when she made a hole-in-one at the par-3 13th on Friday. Her ball bounced high on the edge of the green, took two more small hops and rolled straight into the cup.

Inglis said it was her sixth hole-in-one ever, but only one other had come during tournament play while she was in college.

“I was so shocked like that it actually happened at my home course on a hole that I played so many times.”