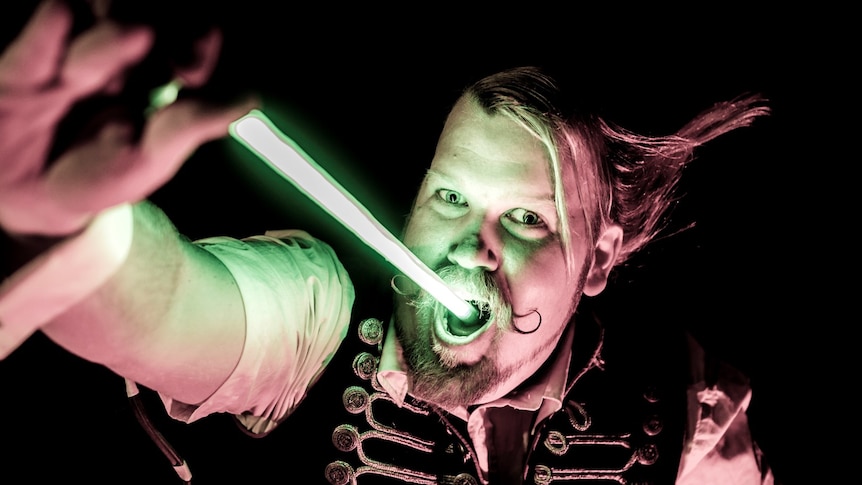 Gordo Gamsby laughs while his two-year-old son balances on his hands.

He looks comfortable and relaxed by a river in northern New South Wales.

It’s a long way from his former life touring the world as an extreme stunt and circus performer, swallowing swords, pulling a car with his tongue, and juggling fire.

His career has spanned over 20 years and 36 countries, and he has achieved 13 Guinness World Records for his feats of strength and manipulation.

“I feel so lucky to have gone the places I have and met the people I have,” he said.

“The crowd-pleasers would include the most apples cut out of my mouth with a chainsaw in a minute.

“I also have the world’s strongest tongue.”

Gamsby holds the Guinness World Record for the heaviest weight pulled with the tongue — 132 kilograms.

He used a hook through his tongue to pull his assistant as she sat on a low-loading trolley.

Gamsby said a video clip showing him towing a car weighing 1,053kg with a hook through his tongue was yet to be verified by Guinness World Records.

Gamsby’s unusual career path was set in motion when he was a teenager at Port Macquarie on the Mid North Coast, and the circus came to town.

“The not-for-profit organization Slippry Sirkus came to our school and did circus workshops for school sport,” he said.

“That really connected with me, more than football or regular sports, and that felt me ​​on my journey to where I am now.”

It took years to perfect some of his more daring feats and he says all things simply take practice.

“I take very calculated risks when I am performing stunts, it’s all very well thought out,” he said.

“It took me close to two years to swallow a sword comfortably to the point where I could perform it.

“I have trained all the muscles of my oesophagus, all the way down my throat, so I can use those usually involuntary muscles and voluntarily open and close them to allow me to slide a blade down my throat without injury.”

After achieving international success, Gamsby has returned to where all began, settling in his home town of Port Macquarie to focus more on family life with his wife Lucy Gamsby Frost and their son Spike.

Ms Gamsby Frost is originally from the UK and the pair met in Western Australia while both touring the circus performers.

“My husband’s acts are really incredible; I am so proud of him,” Ms Gamsby Frost said.

“It’s sometimes a bit scary for me when he’s cutting apples out of his mouth with a chainsaw or swallowing swords or juggling fire, but it’s all fantastic.”

“I have spent the past 20 years bouncing through airports all over the world, I have performed in 36 countries around the world.

“It is definitely a different challenge being a father.”

They have however brought with them elements from their previous life.

“We noticed there wasn’t anything like what we did in Port Macquarie,” Ms Gamsby Frost said.

“So we wanted to bring all our favorite acts to town so we could share these amazing events that we’ve been doing for so long with everyone here.

“It’s very different with a toddler, the touring life isn’t really set up for a 2.5-year-old …and we are excited to share with him what our life was like before.”

Gamsby said it was thrilling to see the festival become a reality.

“It’s very exciting … I have wanted to do a festival here for a really long time, since I was a teenager,” he said.

Gamsby hopes the festival will become an annual event and also hasn’t ruled out more Guinness World Record attempts in the future.

It’s also possible circus tricks could run in the family.

Young Spike balances on his dad’s hands and watches intently as festival performers engage in acrobatics.

There’s certainly no pressure though.

“My only hope for him is that he finds what he would love to do … I don’t mind if he’s an accountant, every circus needs a good accountant,” Gamsby said with a laugh.

“I wouldn’t change much of my life; I feel incredibly lucky … so I don’t mind what he does as long as he follows his passions.”