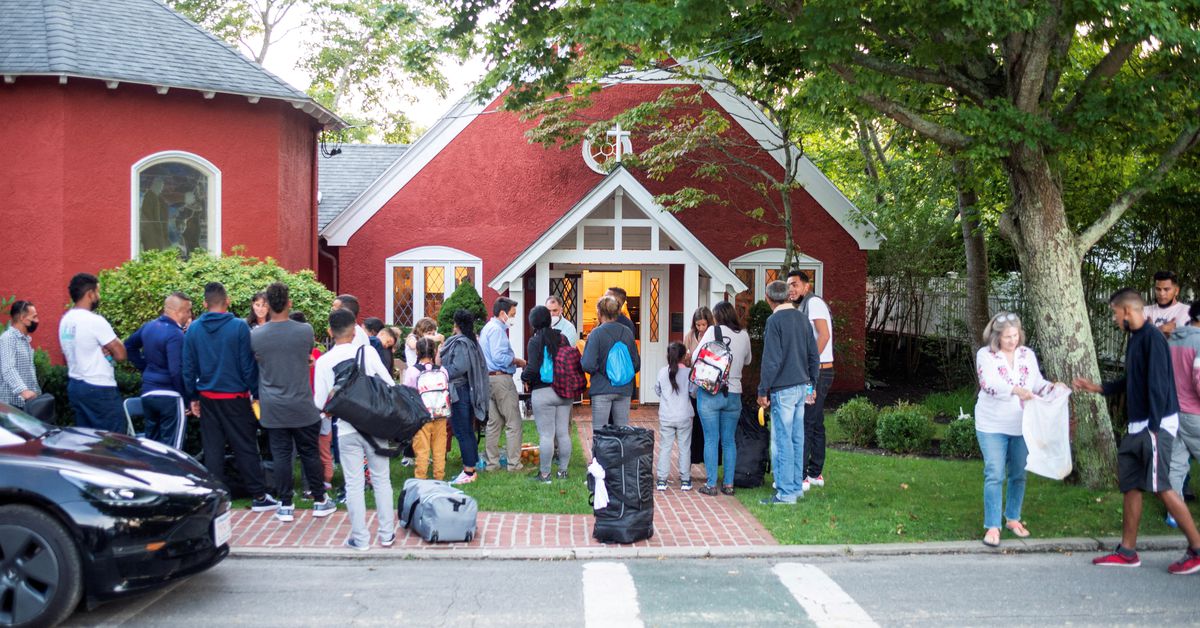 MARTHA’S VINEYARD, Mass., Sept 16 (Reuters) – Florida’s Republican governor on Friday defended his decision to fly dozens of migrants to the wealthy vacation island of Martha’s Vineyard from Texas, and said similar actions could follow as a political dispute over border security deepened in the run-up to US elections in November.

DeSantis claimed credit for a pair of chartered flights on Wednesday that carried around 50 migrants to Martha’s Vineyard, Massachusetts, as part of a broader Republican effort to shift responsibility for border crossers to Democratic leaders.

At a news conference in Daytona Beach, Florida Governor Ron DeSantis blamed Democratic President Joe Biden for what he portrayed as a failure to stop migrants from crossing the US-Mexico border, as a record 1.8 million have been arrested this fiscal year.

DeSantis said the Florida Legislature set aside $12 million to transport migrants out of the state and that his government would likely use the funds “to protect Florida.”

“There may be more flights, there may be buses,” he said to cheers and applause from backers in the crowd.

The state paid $615,000 to Vertol Systems Company Inc, an aviation business, on Sept. 8 as part of a “relocation program of unauthorized aliens,” Florida state data showed. The company did not immediately respond to a request for comment.

Unlike those major cities, the island south of Boston is home to around 20,000 year-round residents and is known as a vacation spot for affluent liberals like former Democratic Presidents Bill Clinton and Barack Obama. read more

On Friday morning in Martha’s Vineyard, the migrants, a group of mostly Venezuelans including half a dozen children, boarded buses en route to a ferry to Cape Cod in transportation organized by Massachusetts Governor Charlie Baker, a Republican. He said they would be temporarily housed at a Cape Cod military base.

The scene left some of the island residents who volunteered to shelter them in a church for two nights in tears. Locals had come together to donate money, toiletries and toys for the migrants. A local thrift shop donated clean clothes, took restaurants turns organizing meals and pro-bono lawyers flew in to help the migrants with paperwork and immigration cases.

“I want them to have a good life,” said Lisa Belcastro, who helped organize cots and supplies at St. Andrews Episcopal Church, which sits among expensive white-clapboard homes in Edgartown. “I want them to come to America and be embraced. They all want to work.”

DeSantis, who is running for reelection in November and is often mentioned as a possible presidential candidate for 2024, said his administration flew the migrants from Texas, and not his own state, to the island getaway because many of the migrants arriving in Florida come from Texas.

In addition to re-election bids by DeSantis and Abott, November’s midterm elections will determine whether the Democrats retain control of Congress.

Many migrants who cross into the United States via the Southwest border are immediately expelled to Mexico or other countries under a COVID-19 pandemic policy. But some nationalities, including Venezuelans, cannot be expelled because Mexico will not accept them and many seek to apply for US asylum.

The White House has decried the Republican governors’ efforts, saying migrants were being used in a political stunt.

“These were children. They were moms. They were fleeing communism. And what did Governor DeSantis and Governor Abbott do to them? They used them as political pawns, treated them like chattel,” White House press secretary Karine Jean-Pierre said at a press briefing on Friday.

The legal basis for the Florida government to round up migrants in a different state remained unclear. US government attorneys are exploring possible litigation around the governors’ efforts, a Biden administration official told Reuters.

The migrants flown to Martha’s Vineyard recently said they had been admitted into the United States on humanitarian parole after fleeing Venezuela, and had been staying at a shelter in San Antonio, Texas, when they were approached by a woman who identified herself as “Perla. “

The woman persuaded them to board the flights by misleading them into thinking they were heading to Boston and would be provided shelter and assistance finding work for three months, they said.

Many said they told the people who organized the flights they had appointments with immigration authorities they needed to attend in other cities, said Ivan Espinoza-Madrigal, the director of Lawyers for Civil Rights, a group in Boston assisting the migrants.

“The organizers of this scheme said ‘Don’t worry, that will be taken care of'” he said.

Reporting by Jonathan Allen in Martha’s Vineyard, Massachusetts, and Rich McKay in Atlanta; Additional reporting by Ted Hesson and Trevor Hunnicutt in Washington and Kristina Cooke in San Francisco; Editing by Mica Rosenberg and Jonathan Oatis