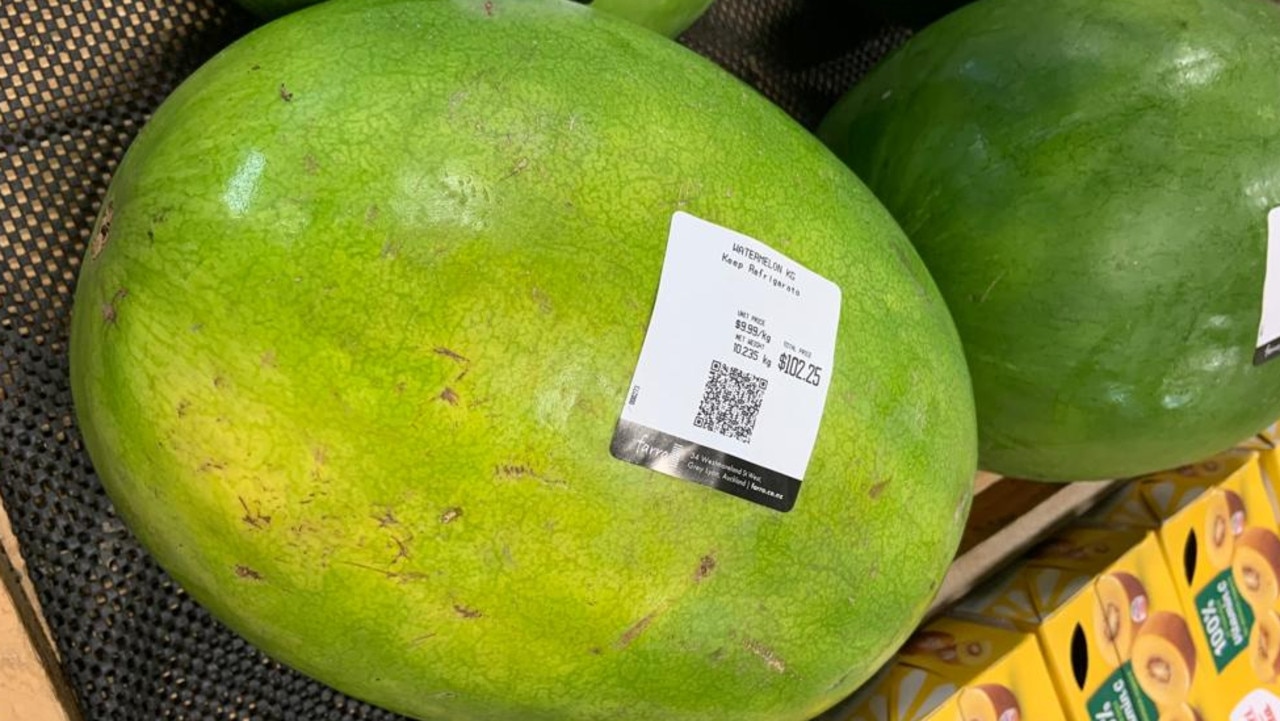 A shopper was left astounded by the outrageous cost of a single watermelon, but the store claims there is a good reason for the exorbitant price tag.

An Auckland shopper has been left gobsmacked after she spotted her local supermarket selling watermelons for as much as $100 each.

The supermarket chain, Farro, says the steep price tag was because watermelon is out of season and the fruit needed to be shipped in from Australia, the New Zealand Herald reports.

“Was thinking about fruit salad, but changed my mind now that watermelons have broken the $100 mark.”

She shared a photo of a melon with a Farro supermarket sticker showing a $102.25 price tag, saying that particular bit of fruit was “huge” and weighed 10kg.

The watermelons cost $10 per kg, she wrote. Another melon next to it is showing off a $69.98 price ticket.

Farro said it strived to offer high-quality and fresh produce and where possible to source these from local suppliers.

“In some instances where we cannot source produce locally due to climate or seasonality, we will selectively import products to provide our customers with specialty items,” a spokeswoman told the Herald.

“The seedless watermelon in this instance was sourced from Australia as there is no watermelon available in NZ, hence it was subject to the high supply chain costs being currently experienced. Both costs and produce quality can be significantly dependent on whether the produce is shipped via sea or air,” she said.

Robinson’s tweet was met with shock by other members of the public who were in disbelief at the cost of a single watermelon.

One person wrote: “Who the hell would even think of paying that for a watermelon? Yikes!”

Other like special water or what a $10 melon would taste if there was something about it.

“Are they full of gold coins?” Another person simply wrote: “Gasp.”

Consumer NZ’s Gemma Rasmussen encourages shoppers to check out a competitor’s pricing if they were unsure about what they should be being charged for a product or service.

“$100 seems like a lot to pay for a watermelon, but given they are out of season, and shipping costs have been on the rise, the cost could be justified. Ultimately it’s up to consumers to set the limit for what they’re willing to pay for an item,” Rasmussen told the Herald.

According to NZ’s Food Price Index Stats, groceries cost 6.4 per cent more this April than they did a year earlier and were up 0.6 per cent on March prices. Cheddar cheese, milk and eggs were big contributors to the increase but fruit and vegetables as a category also jumped a whopping 9.4 per cent.

Fruit and veges were down 3.1 per cent from March 2022, mainly due to falls in the price of broccoli, lettuce and kiwifruit.

This article originally appeared on the NZ Herald and has been republished with permission.