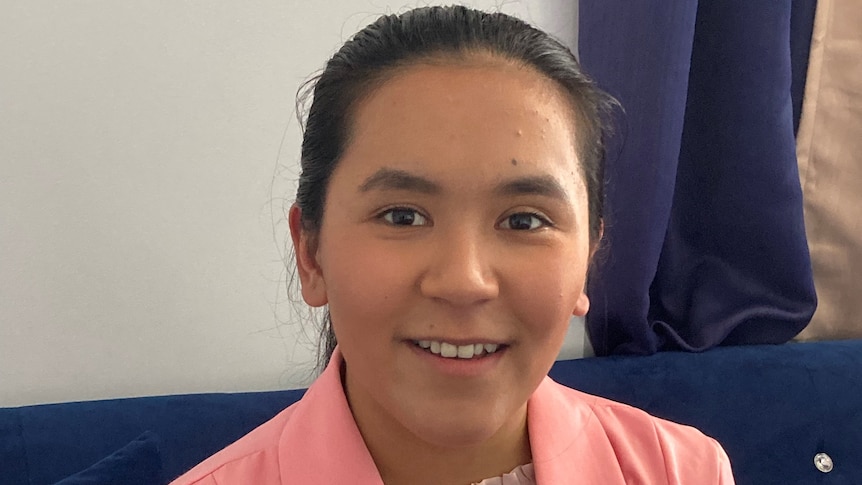 A young woman in jeans rides her bike down suburban Logan street.

For most observers, it’s nothing out of the ordinary.

But for Fahima Ahmadi, it means the world.

The 19-year-old student and her sisters were born in Iran as Afghan refugees of Hazara ethnicity. Ms Ahmadi’s family escaped persecution in Afghanistan. In Iran, their life was very confined.

“There were a lot of restrictions for refugees from Afghanistan,” she said.

“Like many other Afghanistani families, we were alive, but not living. We didn’t have freedom of movement. I wasn’t allowed to participate in some school competitions because of my identity, and being a girl made it harder.”

Since touching down in Queensland on March 20, 2019, Ms Ahmadi’s wasted no time in setting to work on all of her dreams, and, as well as riding a bike, she’s racked up a list of accomplishments.

This year, she is captain of Stretton State College. Last year, she was chosen to be a member of the Queensland Youth Parliament. She’s an active volunteer for Multicultural Australia. She’s an advocate for asylum seekers. She’s been elected secretary of the youth wing of the Labor party. She’s also got her driver’s license … and learned English.

All that, in just three years.

“I feel more myself now than what I was,” she said.

In Iran, the family lived in a very small house, “what most Australians would think is a storeroom,” Ms Ahmadi said.

“My father was a construction worker, leaving home at 5am to come home in the evening in the hope he’d have some food and money to save to pay our school fees so my sister and I wouldn’t be called out in class. “

In his search for a better life for his children, Ms Ahmadi’s father, Mohammad Ali Ahmadi made the treacherous journey to Christmas Island by boat in 2011, before the government introduced mandatory offshore detention.

“He was telling us that there were times that he could only see water. … At one stage he didn’t know if he would survive because it was a broken boat, there were many people there and a lack of food,” she said .

Ms Ahmadi said people in Iran could not understand why her father would go to such lengths for his daughters.

“They were telling my father, ‘why are you risking your life because of your daughters? They are girls. They are going to marry some day’,” she said.

“My parents didn’t have the opportunity to be educated. But I’m so happy and lucky that they had that perception that ‘they are my child and they can be who they want to be’.”

Separated for almost a decade

Ms Ahmadi was eight years old when her father left for Australia. It would be another eight years before she saw him again.

“There were times when I couldn’t remember how he was looking,” she said.

“It was the hardest time that we experienced — especially for my mum. We had nothing and the only thing we had was each other.

“I realized at that time, I needed to grow up faster so I could help my mum.”

Ms Ahmadi attended school in the morning and wrapped chocolates in the evening to earn money.

A diary entry she made on the day she learned she would finally be coming to Australia reads:

Soon I can see my father again.

Soon I can hug my father and feel peaceful.

Soon I can achieve my goals while being with my family.

Ms Ahmadi is not the only one in her family who’s been achieving goals in Australia.

Her parents have recently bought their first home — at Meadowbrook in Logan, south of Brisbane.

The walls are freshly painted. There are new curtains and carpets.

Ms Ahmadi’s older sister, 22-year-old Fatima, has become the first person in her family to attend university. She’s studying a double degree in business and international relations. Last year she was the captain of Woodridge State High School.

Her younger sisters, Zahra and Fariba, are attending school, and Australian-born Samar — the family’s only son and brother — have just turned two.

Mr Ahmadi and wife Howa Khademi are very proud of all of their children.

“I am so happy. I am witnessing their successes and achievements. They are progressing every day and it makes me happy,” said Mr Ahmadi in Persian, which his daughter translates to English.

“What we can remember from our childhood is only war and killing all the time. We didn’t have childhood. It was only war and destruction and misery in Afghanistan and when we immigrated to Iran, there were many problems on our way.

“I hope that my children would progress day by day and become someone to serve the community.

“We now live in Australia and I wish that they would become someone who would have a positive impact on society.”

The very best of human nature

Reflecting upon her own personal experience and aware of the plight of others, Ms Ahmadi has become passionate about social justice.

She plans to study law and become a politician to try to bring about change.

“I want to be there for people — meeting people and hearing their concerns,” she said.

She has already started doing that through her volunteer work with Multicultural Australia.

“Fahima can show us the very best of human nature and human strength. She is someone who’s really had to tap into their personal strength and their resilience and there’s a story in there for everyone about how you can rise above adversity,” Multicultural Australia chief executive Christine Castley said.

“If you reach out and take the hand of a person who’s offering to help you, I think you will be much, much more successful, and Fahima has shown that.

“She’s also reached out her own helping hand to others, and it’s that selflessness that has come through in a lot of the work that she does.”

She is acutely aware that other girls from her homeland will not have the same opportunities.

“I feel so privileged that I have that access to education,” she said.

“Education is key to a better world and a better life.”

She’s already sharing her story and those of other refugees at rallies.

In a speech at her school leadership inauguration, she encouraged fellow students to find their voice to advocate for change that matters to them.

“We want to ensure that all students — no matter who you are — that your story matters, your ideas matter and you are important to us — because we are all in this together,” she said.