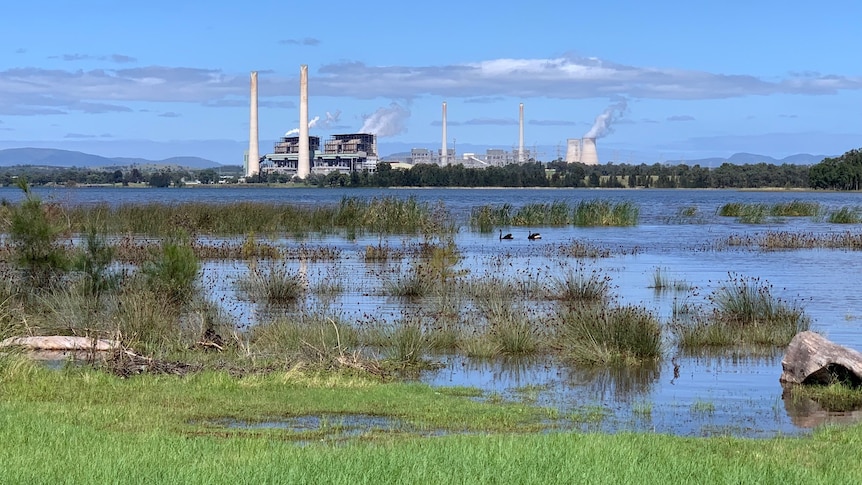 “It’s not conclusive but it’s certainly evidence that the same metals are being leached from the ash dams are bioaccumulating in our water bird species,” Mr Winn said.

“And it means it could be impacting their health, behavior or their reproduction.”

The feathers were collected at Lake Liddell and Lake Macquarie in the Hunter region and Lake Wallace near Lithgow in the Central Tablelands.

He said all bird feathers from Lake Liddell, a breeding ground for more than 100 bird species, showed elevated levels of selenium.

“We found two cormorant feathers that had selenium concentrations that was acutely toxic,” Mr Winn said.

“That’s where the toxicity is such that it may kill them.”

Will coal ash be a legacy pollution issue?

Coal ash is the waste product of burning coal for electricity and accounts for about 18 percent of Australia’s entire waste stream.

The ash contains high concentrations of metals such as selenium, lead, cadmium, arsenic and mercury.

Mr Winn said the metals are leaching from the unlined ash dams into groundwater, or entering waterways during controlled releases or overspill events in heavy rain.

He said the report should trigger NSW government scientists to do “far more work to tighten the exact cause and effect”.

“This is a horrible legacy we could be passing on to next generations and to the ecosystem,” Dr Wright said.

“When ash comes in contact with water, the pollutants mobilise, which means it will probably continue to pollute for centuries.”

Currently, the preferred method of rehabilitation is to cover the ash dams with compacted dirt, but Dr Wright said this was inadequate for the dams in NSW, all of which have no lining membrane to prevent leachate.

The Liddell power station is set to close next year and more will follow over the coming decade.

Mr Winn is pushing for the development of a coal ash recycling industry which would resue the ash to make concrete and other building products.

“It’s a win-win. You create new jobs and remove the pollution problem,” he said.

The environment group also collected 13 feathers from a control site in the Port Stephens Great Lakes Marine Park and found four of those feathers had elevated levels of mercury, despite not being near a power station.

“Rigorous studies require careful controls – there are various sources of these chemicals in the environment, many of them natural,” it said in a statement.

“There are serious questions about the causal linkages the report tries to make.”

But Larissa Schneider, an environmental scientist at the Australian National University specializing in heavy metal pollution, said it would be wrong to dismiss the Hunter Community Environment Center’s “frontline work”.

“It’s a big warning that we need to do something else. We need to find out if there are any health impacts on the birds to [be able to] say whether it is of concern,” she said.

“Sometimes animals can be unaffected, but we just don’t know. It’s an invisible problem that you won’t see until something really big happens and a species stops reproducing.

“By then it can be too late. So we need to be preventive, not reactive.”

She also used sediment core samples to show a sharp increase in heavy metal pollution with the commissioning of the power stations.

The NSW Environment Protection Authority says it is about to begin a year-long ecological study near the ash dams at southern Lake Macquarie.

The EPA study was triggered by the findings of previous reports from the Hunter Community Environment Centre.

The latest report can be found here.