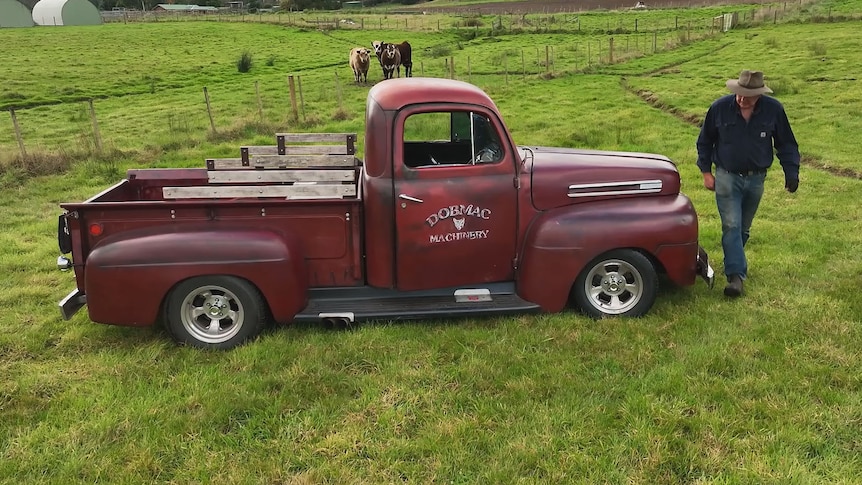 At a farm sale in Idaho, in the US, a 1948 Ford F1 pick-up truck sits half-buried under other rusting sale lots.

A Tasmanian man famed for his affinity with machines sees it and falls in love.

It was Phil Dobson’s wife, Judith, who insisted that he go back and “buy that old thing or forever regret it”.

He joked that his affections have been somewhat divided ever since.

“It’s in the family trust, never to be sold,” said the retired founder of Dobmac Agricultural Machinery, a company still innovating and exporting to several countries from Ulverstone.

“I have often said to my wife that there are two things she has to go before they do and that’s this old truck and my bulldozer.

“She knows I’m joking of course but yeah I am very, very fond of this old thing.”

Mr Dobson grew up on the rural north west coast, snaring rabbits and helping on the farm. His father Claude and his brother still sometimes used steam-driven farm machinery to work the South Road properties he grew up on.

Not many parents would give their son a welder for his 13th birthday but Mr Dobson’s parents did. He said it came with a few bits of protective gear and that it set his course for life.

Through the late 1960s and early 1970s, the teenager did welding repairs on pig troughs on farms behind Penguin and Ulverstone in Tasmania’s north-west.

He soon realized making pig troughs was better money – and smelled better too.

At 16, he purchased his first 10-acre block of land with the earnings from this welding work.

Through a series of accidents – both literal and metaphorical – Mr Dobson would establish his own agricultural machinery business, Dobmac, before he was 25.

A boilermaker welder by trade, he purchased the family farm at 21, only to soon after there was a tractor accident and lost the use of his right leg.

“We had to sell the farm and a gentleman named Michael Frost, who ran Gaffney Machinery, asked me to have a go at modifying an overseas potato harvester for our local soil conditions,” Mr Dobson said.

That was 1983. Over the next 28 years he would spend more time overseas each year than at home, doing business in the countries including the US, Canada, New Zealand, and South Africa.

In 2008, Mr Dobson was doing business in Idaho, USA, good potato country. His wife Judith was along because sometimes they would add a bit of quality time to the end of a trip.

“The old block having the farm sale was the one and only owner of this truck. No rust in it except for the floor of the cab from all the snow melting off their boots in winter,” Mr Dobson said, walking from his bush shack at Eugenana to his dream ride parked just outside.

“It’s a Ford F1, 1948, built in California in the Ford factory on the second month that they made the Ford F series trucks. And they still make them new today.

“There are a lot of old Chevy farm trucks about but not many like this old Ford.

“When my wife said I should buy it, it took about a nanosecond to decide. It won’t ever get any easier than that.”

Mr Dobson paid less than US$1,000 for the truck and set off to the nearby depot where Dobmac shipped its containers in and out.

The doors flew open a couple of times around corners and it blew enough smoke to attract plenty of attention.

Soon after he got it home, Mr Dobson’s health took a turn for the worse. After surgery on his sinuses he developed a permanent headache and some heart issues that led to an early retirement in 2012.

His son Mark took over the business along with his wife, Amanda, and they still run it successfully today.

Mark is also rumored to be the only other human allowed to drive Mr Dobson’s little Ford pick-up.

The little truck has been a project of passion for nearly 14 years. It has been given a Mustang front end, strengthened chassis, a modern 360-hp V8 engine to replace the original 60-hp side-valve – even a GPS speedo.

“The paint’s basically original, touched up here and there but there was virtually no rust aside from the floor. It’s got one of the original tires mounted on the side, rubber’s perished of course,” Mr Dobson said.

“I just wanted it to be a farm truck, not a hot rod. I don’t think twice about hitting the gravel or heading across the paddocks.”

Mr Dobson said they took it for Sunday, Monday, Tuesday and Wednesday drives.

“My wife always asks me why I have to drive down the main street so much when we take it into town,” he said.

“But showing her off and talking to people about her is half the fun. It’s rare that someone doesn’t jump out with a phone to take a photo.”