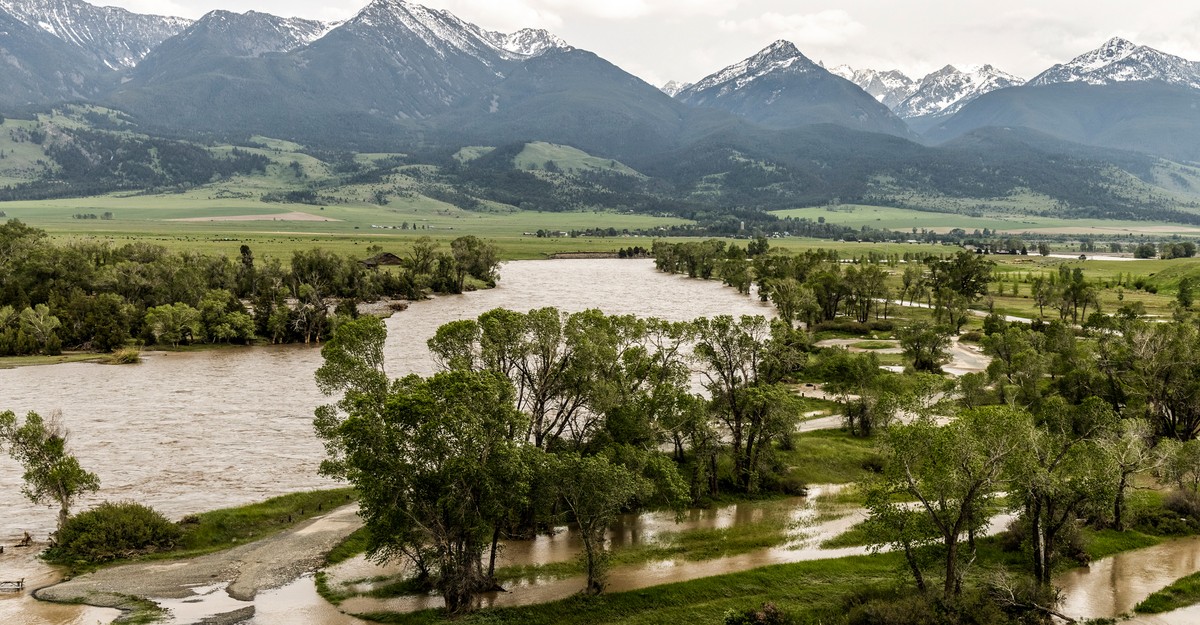 Unprecedented flooding in the Yellowstone area on Monday, June 13, inundated homes, devoured roads, swept away bridges, isolated entire towns, and shut down one of America’s busiest and most famous national parks. It was yet another indication of the impacts that climate change is likely to have on flood- and drought-ridden communities across the West.

In Livingston, Montana, a town of about 8,000 an hour north of Yellowstone National Park, dozens of people stood along a levee Monday morning, watching chocolate-milk-colored water chug through. I was one of them. A torrent of mud, foam, and logs surged by us.

A cool, wet spring had left the area with a far greater snow-water equivalent than normal. Warming temperatures combined with two to three inches of rain felt more than five inches of snowmelt in the mountains in and around Yellowstone—especially the Beartooths and the Absarokas—sheeting into the Yellowstone River and its tributaries. The Yellowstone runs from the heart of the park through Livingston. I live less than a half mile from the river.

By about noon, the river was raging at about 50,000 cubic feet a second. Federal data show the volume of water rushing through the river had reached about 32,000 CFS just three times over the past 130 years. But the flow on Monday nearly doubled the previous record. Soon, those same data showed, river levels were nearly two and a half feet higher than ever recorded.

“It’s amazing and awe-inspiring, but it’s also exactly what we as climate scientists have expected for decades,” says James Marshall Shepherd, director of the atmospheric-sciences program at the University of Georgia and former president of the American Meteorological Society. He explained that climate change is causing the water cycle to accelerate, fueled by earlier snowmelt combined with more and more intense rainfall.

“It’s a tale of two extremes,” Shepherd told me. At the same time that much of the West is facing debilitating heat waves, extreme wildfires, and the worst drought in 1,200 years, climate change is also amplifying the worst rainfall events, including the “atmospheric river” that dumped moisture on the Yellowstone area.

On Monday, the water rushing out of the mountains in and around Yellowstone National Park swelled the river and hurtled downstream. Gardiner and Cooke City, towns near the park, were cut off from supplies of food and water. Downtown Red Lodge, another park-adjacent town, was soon underwater. The floods tore huge chunks from roads throughout the northern section of Yellowstone itself. The entire park shut down, and 10,000 tourists were evacuated.

“I’ve heard this is a 1,000-year event, whatever that means these days,” Yellowstone’s superintendent, Cam Sholly, said at a press conference on Tuesday. “They seem to be happening more and more frequently.”

Soon, my own house was under pre-evacuation notice, along with other parts of Livingston near the river. My partner and I packed up valuables and all we’d need for a couple of nights away. We picked everything we could up off the floor in case the house flooded, and we loaded our dog into the car.

We got word from a friend, Celeste Mascari, that she could use some help protecting her home. Mascari lives about 700 feet from the river and runs a Montessori school on her property. When we arrived, the school’s crawl space was already flooded, and water was fast approaching from her backyard. Mascari, who grew up in the area, said that one of her brothers dela had probably lost his house, while another had lost his greenhouse, and a chunk of his income ela with it.

We surrounded the house and school with sandbags. But within a couple of hours, the water had breached the perimeter. Panicked, we created new barriers and dug trenches to help drain the water from the yard. We left when the water in the street reached the height of a car tire; we knew we had done all that we possibly could.

Soon after, we got the official order to evacuate our own house. We stayed with friends who live on a hill on the other side of town. I could barely sleep, wondering what was happening to our home—and to the rest of the community.

About a mile away from our house, water had begun to trickle over the levee that separated the town from the river. If the levee breached, certain chaos would follow. That trickle grew, and by about 8:30 pm, it seemed hopeless, Erica Lighthiser, the deputy director of the nonprofit Park County Environmental Council, told me. But then, she said, some 50 community members joined the effort, filling and placing sandbags. They worked at bolstering the levee until well after midnight—and it held back the water.

Lighthiser said the whole experience was a lesson in the community’s resilience. “It took everybody, and that was pretty amazing to see,” she said. “But I think it’s going to take me some more time to really process all this.”

That’s a feeling I could relate to. By morning, our house was still dry. But the barriers we’d erected around Mascari’s property hadn’t held. Her school dela was knee-deep in water, and friends, volunteers, and I scrambled to clean up and assess the damage. The governor’s office declared a statewide disaster. The local hospital in Livingston was evacuated. Employees of the local animal shelter narrowly escaped the flooding with their animals. People lost their homes and their livelihoods, and were separated from their loved ones. Livingston and other towns affected by the flooding rely on the roughly $642 million dollars, as of 2020, that Yellowstone tourism injects into local economies. Much of that money is likely to dry up along with the floodwaters. The extensive damage in the northern part of the park means that much of Yellowstone will be closed for months.

“We can no longer talk about this as a future tense, that this is what’s going to happen and this is what climate change is going to do for flooding in Montana,” Shepherd, the meteorologist, told me. “It’s here.”