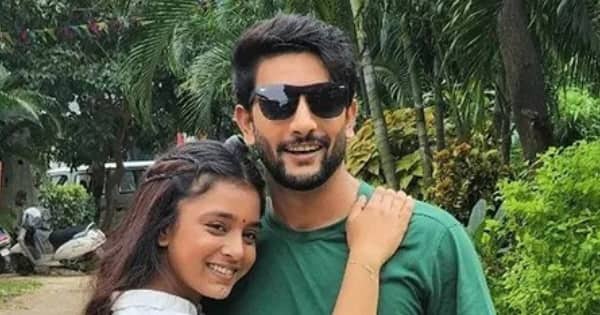 Imlie is among the most popular TV shows. Thanks to Fahmaan Khan and Sumbul Touqeer’s chemistry that the show managed to attain great TRPs. Fahmaan essayed the role of Aryan and Sumbul was Imlie and they were together known as Arylie. They have now quit the show as the first season is coming to an end. But Arylie fans, here is some good news for you. Your favorite stars, Fahmaan and Sumbul are teaming up for a music video and the first look of the same is out now. Also Read – TV News Weekly Rewind: Fahmaan Khan-Sumbul Touqeer wrap up Imlie, Anupamaa’s Toshu disgusts fans, Disha Vakani in Taarak Mehta Kya Ooltah Chashmah and more

Fahmaan Khan and Sumbul Touqeer’s new music video is with Tabish Pasha. The song is named as Ishq Ho Gaya. In the first look poster of the song, we can see Fahmaan carrying Sumbul on his shoulder while she certainly does not look happy. Going by the caption of the post, one can assume that this would be a Navratri special song. Arylie fans are commenting on and are saying that they cannot wait for the song to come out. The first look has gone viral on entertainment news. Also Read – Imlie: As Fahmaan Khan aka Aryan Singh Rathore’s journey comes to an end on the show; here’s how he won hearts on and off screen

Imlie 2 promo is out now

While Imlie season 1 is coming to an end, it was just yesterday that the promo of Imlie 2 made it to the internet. It is Megha Chakraborty who is going to take lead in season 2 as Meethi. And then there is Cheeni who is going to be her sister. In the promo, we see Sumbul Touqeer aka Imlie who is introducing the new characters. Also Read – Bigg Boss 16: Imlie actor Fahmaan Khan finally clears the air about participating in the Salman Khan reality show; fans react [Read Tweets]

Is Fahmaan Khan going to be a part of Bigg Boss 16?

On the other hand, we were the ones to tell you that Fahmaan Khan has been approached to be a part of Salman Khan’s show Bigg Boss 16. Whether he has given of yes or not to be a part of the show or not is yet to be known.