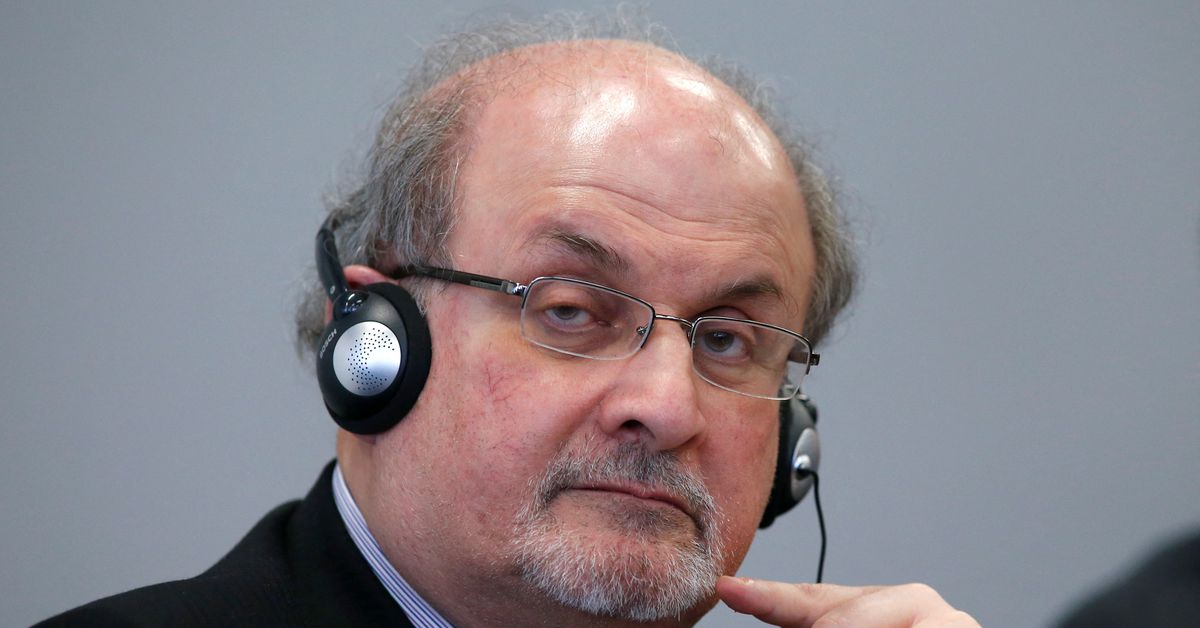 DUBAI, Aug 15 (Reuters) – No one has the right to level accusations against Iran over Friday’s attack on Salman Rushdie, for which he is to blame after denigrating the world’s Muslims, the foreign ministry in Tehran said on Monday.

The novelist, who has lived under a death threat for decades since enraging clerical authorities in Iran through his writing, is recovering after being repeatedly stabbed at public appearance in New York state. read more

In Iran’s first official reaction to Friday’s attack, ministry spokesperson Nasser Kanaani said freedom of speech did not justify Rushdie’s insults against religion. His 1988 novel “The Satanic Verses” is viewed by some Muslims as containing blasphemous passages.

“(Regarding) the attack on Salman Rushdie, we do not consider anyone other than himself and his supporters worthy of …reproach and condemnation,” Kanaani told a news briefing. “No one has the right to accuse Iran in this regard.”

Writers and politicians around the world have condemned the attack. His agent told Reuters that Rushdie had sustained severe injuries, including nerve damage in his arm and wounds to his liver, and was likely to lose an eye. read more

A spokesman for British Prime Minister Boris Johnson said it was “ludicrous” to suggest Rushdie was responsible for the attack.

“This was not just an attack on him, it was an attack on the right to free speech and expression,” the spokesman told reporters.

US Secretary of State Antony Blinken said on Sunday that Iranian state institutions had incited violence against Rushdie for generations, and state-affiliated media had gloated about the attempt on his life.

The Indian-born writer has had a bounty on his head since “The Satanic Verses” was published in 1988. The following year, Iran’s then Supreme Leader Ayatollah Ruhollah Khomeini issued a fatwa, or edict, calling on Muslims to kill the novelist and anyone involved in the book’s publication.

In 1991, the novel’s Japanese translator, Hitoshi Igarashi was stabbed to death. A former student of Igarashi’s on Monday renewed calls for his murder dele to be solved, the Ibaraki Shimbun newspaper reported.

A police spokesperson told Reuters that an investigation was still active and that the statute of limitations on the crime, which expired in 2006, could be lifted.

The novel’s Italian translator was wounded in 1991 and two years later its Norwegian publisher was shot and seriously wounded.

In 1998, Iran’s pro-reform government of President Mohammad Khatami distanced itself from the fatwa, saying the threat against Rushdie – who had lived in hiding for nine years – was over.

He was about to deliver a lecture at the Chautauqua Institution in western New York on the importance of the United States as a haven for targeted artists when police say a 24-year-old man hit the stage and stabbed him.

Ministry spokesperson Kanaani said Rushdie had “exposed himself to popular outrage by insulting Islamic sanctities and crossing the red lines of 1.5 billion Muslims.”

Kanaani said Iran had no other information about the novelist’s suspected assailant except what had appeared in media.

The suspect, Hadi Matar of Fairview, New Jersey, pleaded not guilty to attempted murder and assault at a court appearance on Saturday, his court-appointed lawyer, Nathaniel Barone, told Reuters.

An initial law enforcement review of Matar’s social media accounts showed he was sympathetic to Shi’ite extremism and Iran’s Islamic Revolutionary Guard Corps (IRGC), according to NBC New York. Washington accuses the IRGC of carrying out a global extremist campaign.

Matar is the son of a man from Yaroun in southern Lebanon, according to Ali Tehfe, the town’s mayor. Matar’s parents emigrated to the United States, where he was born and raised, the mayor said, adding he had no information on their political views of him.

The Iran-backed armed group Hezbollah holds significant sway in Yaroun, where posters of Khomeini and IRGC commander Qassem Soleimani, killed by a US drone strike in 2020, adorned walls at the weekend.

A Hezbollah official told Reuters on Saturday that the group had no additional information on Friday’s attack.