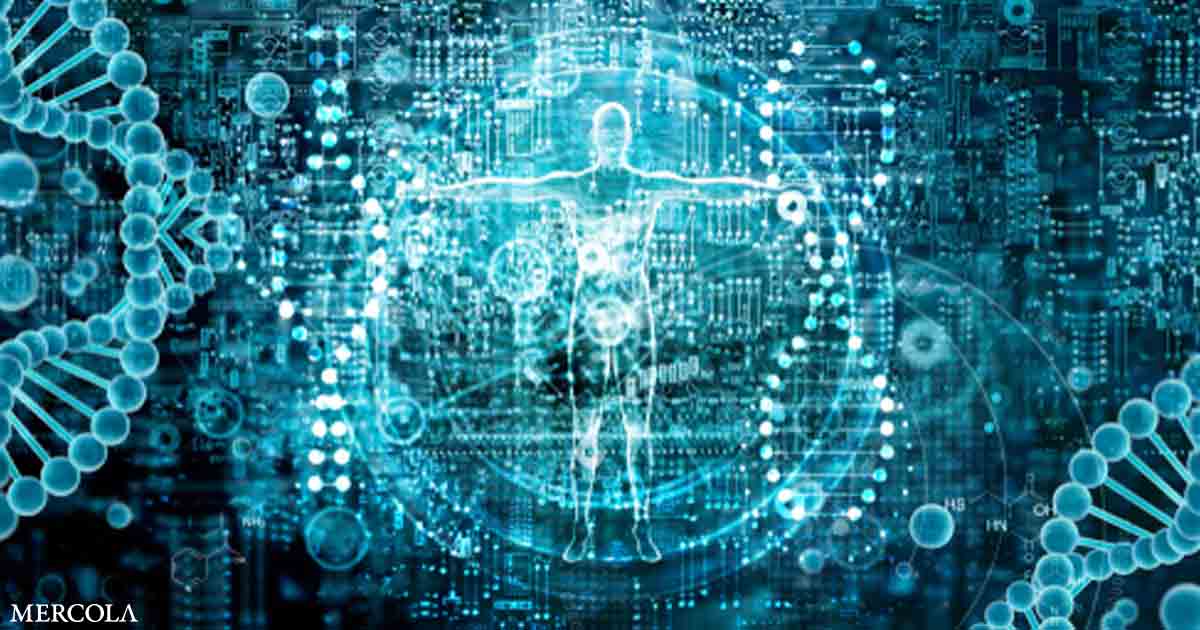 In the video above, Glenn Beck interviews investigative journalist Whitney Webb about her book, “One Nation Under Blackmail: The Sordid Union Between Intelligence and Crime That Gave Rise to Jeffrey Epstein,” Parts 1 and 2.

These books provide the necessary framework to understand not just Jeffrey Epstein’s geopolitical role and function, but also, more broadly, the deep connections between the US intelligence community and organized crime.

The political corruption we see today grew out of this unholy alliance, which has led to blackmail and bribery being two key strategies by which the wealthy self-described “elites” maintain power and influence from behind the scenes.

As noted by Beck, Webb “is a massive threat to powerful people. If people will listen and … explore what she’s saying, the game is up.” I agree. People need to understand how the system we thought we knew actually works, how it’s been used against us, and what the end game is.

Organized Crime at the Highest Levels

Epstein’s pedophilia and sexual blackmail enterprise was a central cog in this network of corruption for decades. He was also involved in many other questionable and/or criminal enterprises, including financial crimes, but he wasn’t necessarily at the top level in any of them. Webb describes him more as a middle-management-type of character, carrying out orders from higher-ups, including US intelligence.

Overall, these “higher-ups” are people who favor globalism and global governance, and who don’t want the United States to have a monopoly on power. This is part of why the power of the US is now being dismantled before our eyes, but the undermining and infiltration have been going on for decades.

As noted by Beck and Webb, our government is basically being run by organized crime, and this organized crime ring is setting into place a technocratic form of feudalism, a digital slavery system.

The reason Epstein’s financial crimes matter is because they’re like a microcosm of what has been going on in the US for decades. According to Catherine Austin Fitz and Mark Skidmore, an estimated $21 trillion of US taxpayer money has already been looted, stolen and siphoned out. Where did all that money go? Who took it?

Against that background of having already been looted, we’re now facing a radical degradation of our standard of living, with rising inflation and manufactured energy and food crises piled on top of each other.

All of these things, Webb says, are part of a plan to coerce us into accepting the unacceptable. Making sure people are cold, hungry, destitute and desperate is a surefire way to get people to cooperate with the globalist takeover, which includes a radical transition into transhumanism.

In the interview, Webb reviews the history of transhumanism, the roots of which go back to Julian Huxley, brother of the famous author Aldous Huxley. Julian was president of the British Eugenics Society.

When the United Nations was created after World War II, it was put in charge of the United Nations Educational, Scientific and Cultural Organization (UNESCO), the stated aim of which is to promote world peace and security through international cooperation in education, arts, sciences and culture.

But in writing about his vision for UNESCO, Julian said about eugenics, “We need to make the unthinkable thinkable again.” Ten years later, in 1957, he coined the term “transhumanism,” and described it as eugenics through the merging of man with machine.

So, transhumanism is eugenics rebranded. This is also corroborated by the fact that the same people, families and organizations that in the past supported eugenics now support transhumanism. Likewise, the merger of Silicon Valley companies with Big Pharma is nothing other than eugenics framed as health care. And COVID has now shown us that this rebranded form of eugenics can be forced on us.

Transhumanism Is Not for Betterment of the Average Person

As noted by Webb, while transhumanism is sold to us as a way for all people to obtain health and longevity — health equity for all! — the reality will be far from equitable.

She points out that science fiction writer HG Wells once described the transhumanist future as one in which there is a physically and intellectually augmented elite class, and squat, dwarf-like, slave underclass that eats bugs and doesn’t even have the cognitive capacity to rebel.

Sound familiar? The World Economic Forum and their allied networks are pushing for a transition from real meat to insects. One of the primary side effects of the bioweapon referred to as the “COVID-19 vaccine,” aside from early death, is neurological dysfunction, and the masking, lockdowns and shuttering of schools have resulted in children who are nonverbal, cognitively impaired and/ or years behind on core reading and math skills.

The Transhumanist Plan Is Being Fast-Tracked

As detailed in “The Plan to Turn You Into a Genetically Edited Human Cyborg,” a 2021 report by the UK Ministry of Defense and the German Bundeswehr Office for Defense Planning offers shocking insights into the dystopian cybernetics future that global technocrats are pushing us toward.

The report, “Human Augmentation — The Dawn of a New Paradigm, a Strategic Implications Project,”1 reviews the scientific goals of the UK and German defense ministries, and they are precisely what the title suggests. Human augmentation is stressed as being a key area of ​​development.

It’s worth noting that anything released to the public is a decade or more behind current capabilities, so everything in this report can be considered dated news, even though it reads like pure science fiction.

Importantly, the report notes that “Human augmentation has the potential to … change the meaning of what it means to be a human.” This is precisely what Klaus Schwab, founder and executive chairman of the World Economic Forum (WEF), has stated is the goal of The Fourth Industrial Revolution.two

Schwab has stated that “the Fourth Industrial Revolution will lead to a fusion of our physical, our digital and our biological identities.”3 Beyond your own “enhanced” 5G cloud-connected self, the WEF foresees a near future in which everyone’s digital identity is connected to each other through an “Internet of Bodies” (IoB).4🇧🇷5

The fact that we’re moving at lightning speed into the transhumanist future envisioned by the WEF and militaries around the world is also evidenced by President Biden’s September 2022 Executive Order on Advancing Biotechnology, which places development of genetic engineering techniques “to write circuitry for cells and predictably program biology” on the fast-track.

US Defense Department Is Also Working on Human Cyborgs

In a September 14, 2022, Substack article,6 doctor Robert Malone also reviewed the US DoD’s plans for an army of human cyborgs. Certain report titles alone tell the story, such as the Biotechnologies for Health and Human Performance Council’s report7 “Cyborg Soldier 2050: Human/Machine Fusion and the Implications for the Future of the DOD.” According to the assessment abstract:

“The primary objective of this effort was to forecast and evaluate the military implications of machines that are physically integrated with the human body to augment and enhance human performance over the next 30 years.

This report summarizes this assessment and findings; identify four potential military-use cases for new technologies in this area; and assesses their impact upon the DOD organizational structure, warfighter doctrine and tactics, and interoperability with US allies and civil society.”

Human augmentation technologies deemed technically feasible by 2050 at the latest include ocular enhancements to improve sight and situational awareness, optogenetic bodysuit to restore or improve muscular strength and control, auditory enhancements, and neural enhancement of the brain for two-way data transfers and brain- to-brain communication.

With HG Wells’ description of our transhumanist future in mind (the two-tiered society of augmented super humans and bug-eating devolved slaves), it’s worth noting that both the DoD’s “Cyborg Soldier” report and the British/German “Human Augmentation” report address the fact that human augmentation will inevitably widen already existing disparities, inequalities and inequities — not close them! — and therefore technologies, “efforts should be undertaken to reverse negative cultural narratives of enhancement.”8

In other words, don’t let people come to the conclusion that human “borgs” are a bad idea, because at worst that might prevent their development, and at best, it’ll pitch regular people against the augmented elite, making their efforts to rule more difficult. Combating negative narratives about the borgification of mankind is also necessary in order to maintain the lie that transhumanism is about leveling the playing field and allowing everyone to live longer and have lifelong health.

I don’t know what it will take to prevent the dystopian post-human world envisioned by technocratic transhumanist elitists, but I suspect education would be a cornerstone of such an endeavor. In order for there to be a resistance, enough people need to be aware of what the plan is, and where we’re actually being led with all these novel therapies and inventions.

In the shorter term, it’s crucial to realize that the fast-tracking of “genetic engineering technologies and techniques to be able to write circuitry for cells and predictably program biology in the same way in which we write software and program computers” means they’re going to cut corners. Loads of them.

Testing is basically going to be done on the population at large, just as they’ve done with the COVID jabs. The results of such experimentation are relatively predictable. People will be seriously injured and many will die.

We also still don’t know what the legal standing of people whose genetics are altered by RNA might be, now or in the future, since that has yet to be established.

So please, think long and hard before you agree to take any of these forthcoming gene therapies, be they COVID boosters or any other “vaccines.” They’re not vaccines. They’re gene transfer technologies that alter your DNA.9🇧🇷10 They’re part of the transhumanist agenda, the Fourth Industrial Revolution — and remember, transhumanism is a eugenics agenda. Same agenda, just new tools.