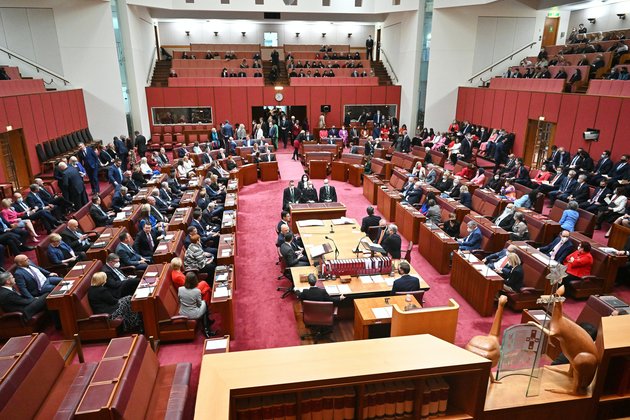 With more independents, women, Indigenous Australians and MPs from a multicultural background than ever before, federal parliament seems ready to deal with issues that have been lying dormant for years.

And one of these – highlighted by the heavily contested Senate race in the national capital in May – is the right of the ACT (and the Northern Territory) to enact their own voluntary assisted dying legislation.

The anomaly is especially evident to Canberrans. A person living in the NSW town of Queanbeyan who drives ten or 15 kilometers to work in Canberra has more democratic rights than colleagues who live in the ACT.

At the border they encounter section 122 of the Australian constitution, with its legislative override of ACT democracy – despite self-representation for the ACT having been legislated in 1988 (and 1978 for the NT).

Before self-government, the federal territories minister made all decisions about the ACT. Since 1988, the locally elected ACT Legislative Assembly is responsible for making laws for the ACT, and its counterpart in Darwin makes laws for the NT.

It was section 122 that empowered Coalition frontbencher Kevin Andrews to champion the Euthanasia Laws Act 1997, which reduced the power of the ACT and NT assemblies to make laws permitting doctors to help a terminally ill person end their life. The Restoring Territory Rights Bill 2022, passed in the house on August 3, is designed to reverse that legislation.

Debate on the bill resumes in the Senate on September 5. If it passes, as looks likely but not certain, it will restore the right of territories to equality of self-government – at least in this respect, and at least for the time being , given the threat of override is always hanging.

The long road to self-government

The road to representation for residents of the ACT and the NT began with the Senate (Representation of Territories) Act 1973, passed in August 1974, which allowed for two senators each from the Northern Territory and the ACT in the 1975 and subsequent elections. Each state was represented by increased ten senators (formerly six), a number that to 12 in 1983.

Comparisons make the anomaly obvious. Tasmania, with a population only slightly more than the ACT, has 12 senators while the ACT and the NT are still stuck on two. Back in 1975, the NT’s population was around 100,000; by 2021, according to the census, it was 233,000.

Over the same period the ACT’s population has grown from 200,400 to more than 454,000. In each state, population growth over those 46 years has merited two more senators, but each territory’s representation has stayed at two.

Section 40 of the Commonwealth Electoral Act allows the number of senators in the ACT or the NT to increase beyond two only when the number of House of Representatives seats in the jurisdiction grows to six or more. With the ACT’s House representation now on three, there is little prospect of this. (Tasmania, with 402,000 electors at this year’s election to the ACT’s 314,329, has five lower house seats.)

A simple but effective change

But the Commonwealth Electoral Act can be amended by the parliament under section 122 of the Constitution. Doing so would open the Commonwealth’s ear to the ring of Canberra and NT residents’ views about decisions that have a specific impact on the territories. It would also enable smaller parties and independents the same opportunities to reflect the diversity of the territories’ citizenry as they do elsewhere in the country.

Increased representation would also make the bill like the Euthanasia Laws Act 1997 much less likely. how? Under the Senate’s proportional representation system, a candidate currently needs 33% of the vote to be elected in the ACT or NT. Increasing the number of Senators to four, but retaining the current three-year terms, would reduce that quota to 20%.

This is still a significant threshold, but it would give smaller parties and independents a real chance at each election of obtaining representation.

This year’s serious contest for the ACT’s Senate places, with the surprise election of an independent candidate, David Pocock, means that the ACT’s needs are for the first time taken seriously by all parties. Labor’s Restoring Territory Rights Bill 2022 is the striking result.

The simple doubling of territory representation in the Senate is nowhere near as dramatic as a proposal for the ACT or the NT to become a state, which would require constitutional change. It is a modest change to legislation that would have a similar practical impact while helping restore democracy in our federal system.