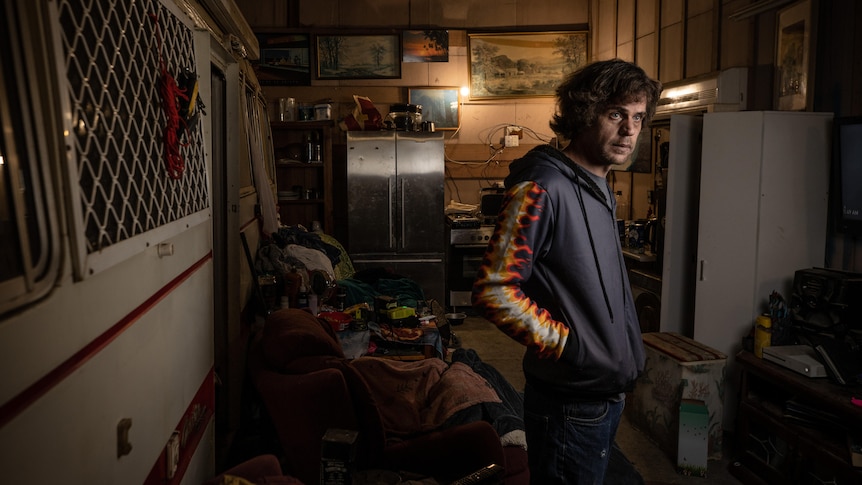 A 39-year-old stroke victim is unable to leave hospital because she and her partner have been living in an industrial shed in southern Tasmania.

Venita Brown has been told she may end up in an aged care facility or a women’s shelter if she and her partner, James Paul, cannot find a suitable place to live.

“She’s constantly depressed,” Mr Paul said. “She pretty much thinks she is stuck in hospital because she’s got nowhere to go. They’re saying I am not allowed to bring her back here.

Ms Brown suffered a stroke about two months ago. A month prior to that, she and 42-year-old Mr Paul moved into the shed.

They could not find a rental they could afford on a combined disability pension and carers allowance of around $1,300 a fortnight.

“Most two bedrooms are $300 to $400 a week and you’ve got to be able to feed yourself and pay the power bill and everything else,” he said.

The couple moved into the shed as a temporary measure. They have put together a makeshift kitchen and there is an outdoor toilet and shower.

But the shed has no windows, the roof leaks and, with very high ceilings, it is hard to heat. The entrance is a small door that cannot be accessed without crouching down.

He said the shed was a stop-gap and was never meant to be lived in permanently.

“It [is]some would say, a health hazard, but more through summer they’ll be at risk of if we have a fire, there’s [only] one way in [and] one way out.

“If you want to go to the toilet, or you want to have a shower, you pretty much risk getting hypothermia.”

Mr Paul said Ms Brown had been on the waiting list for public housing for two years before suffering a stroke.

The couple said they would move anywhere in the state in order to secure a suitable home.

“They don’t care where, they just need a house,” Mr Carter said.

“There’s hundreds of other people that are in the same situation and it’s just ongoing and it’s getting worse,” he said.

The situation is becoming increasingly desperate, with Ms Brown due to be discharged from the Royal Hobart Hospital (RHH) in a matter of weeks.

“Hobart Royal is already jam-packed, they’re already screaming, saying, ‘We don’t have room’ … yet, what are we doing?” Mr Carter said.

“Keeping people in beds because they’ve got nowhere else to go … is that the reason why the hospital is so full and services are being stretched to the limit?

“The housing crisis has gotten to a point where people are actually homeless … the hospitals aren’t able to release them due to a duty of care.”

Doctors said the housing crisis was contributing to a shortage of hospital beds across the country.

“We have to practice good patient care and we cannot release someone from hospital unless they go to a safe environment,” the Australian Medical Association’s John Saul said

Dr Saul said a shortage of aged care placements and securing NDIS support for patients was making it increasingly harder to discharge patients.

“It’s contributing to back pressure down into the hospitals and, ultimately, that goes to the ED departments, that then goes to the ambulances,” he said.

“It’s a domino effect that’s traveling all through our systems. How does this feel from a doctor’s point of view? Incredibly frustrating.

“Some of these things are absolutely soul-destroying for our hard-working staff. We’re seeing it in homelessness with mental health issues as well.

“If a mental health patient, for example, goes back on the streets, it is unsafe, they will only present back to ED earlier if they haven’t got safe and appropriate housing.”

The Tasmanian government is calling on the federal government to fund transitional beds for long-term NDIS and aged care patients.

Premier Jeremy Rockliff said the number of patients unable to leave hospital because they were waiting for aged care accommodation or an NDIS package equated to two wards at the Royal Hobart Hospital.

“These numbers have a large impact for a small state that is doing its best to manage significant COVID workloads,” Mr Rockliff said.

He said the Commonwealth could fund sub-acute beds in private hospitals “while we work together to look at longer-term solutions around accommodation to speed up the safe transfer of the medically-ready to aged care and NDIS supported living arrangements”.

In a statement, Department of Health Secretary Kathrine Morgan-Wicks said that, as of August 6, there were 29 aged care patients and 17 disability care patients medically ready for discharge from their acute bed but unable to leave due to waiting for aged care accommodation or an NDIS package.

There are around 4,400 people on the waitlist for public housing in Tasmania.

“Communities Tasmania regularly works with the Department of Health in situations where people are leaving medical care to find the most-appropriate accommodation options to best suit people with a range of unique requirements,” he said.

“For example, our rapid rehousing program is specifically designed as transitional accommodation for eligible people to support them into long-term housing.”

The Tasmanian government is working on a plan to lift housing stock by 10,000 new homes over the next decade.

After the ABC visited Mr Paul at the shed, wild weather and nearby flooding forced him to shelter at a family member’s home.

It is not clear when he will be able to return.