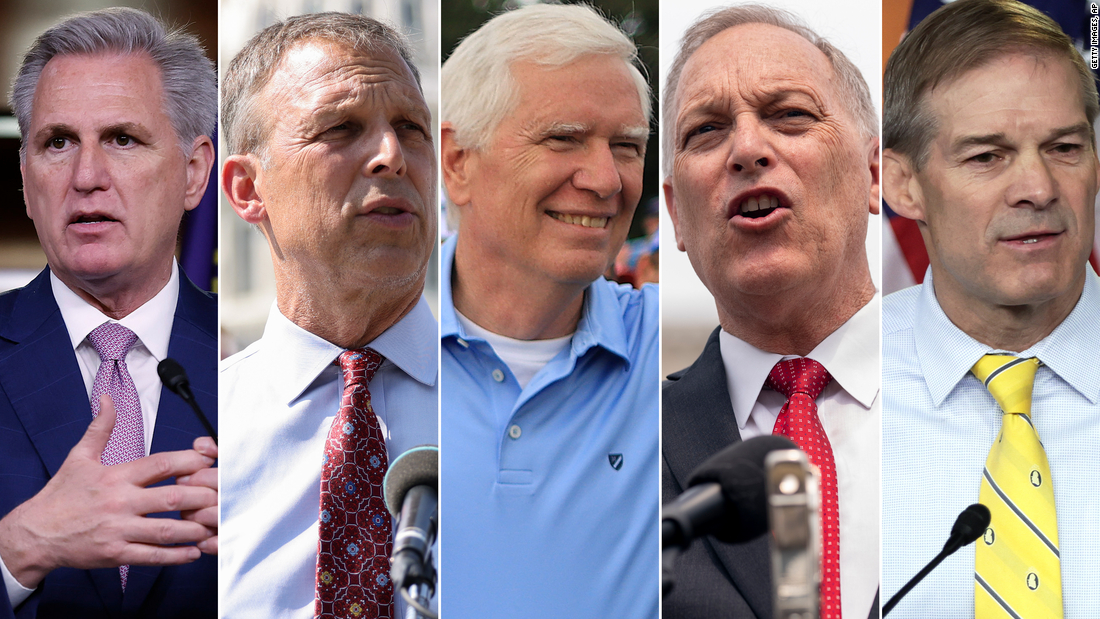 Lawmakers on the panel have been weighing whether to subpoena their Republican colleagues for months, wrestling with whether they had the constitutional right to do so, and debating whether they wanted to set such a precedent.

And with hearings less than a month away, the panel is facing a ticking clock to get all the information it can.

“The Select Committee has learned that several of our colleagues have information relevant to our investigation into the attack on January 6th and the events leading up to it,” the panel’s chairman, Democratic Rep. Bennie Thompson of Mississippi, said in a statement. “Before we hold our hearings next month, we wished to provide members the opportunity to discuss these matters with the committee voluntarily.”

“Regrettably, the individuals receiving subpoenas today have refused and we’re forced to take this step to help ensure the committee uncovers facts concerning January 6th,” he continued. “We urge our colleagues to comply with the law, do their patriotic duty, and cooperate with our investigation as hundreds of other witnesses have done.”

The committee has scheduled the depositions for the members of Congress for the end of May.

CNN has reached out to the five congressmen for comment.

McCarthy would not say whether he plans to comply with the subpoena to appear before the committee, saying he hadn’t seen it yet, although he later clarified that his attorney had received it. But he said he still views the committee as illegitimate.

“My view on the committee has not changed,” McCarthy said. “They’re not conducting a legitimate investigation. They just want to go after their political opponents,” he told reporters. “But the one thing that has changed in America: higher inflation … unsecure border, gas prices and now we don’t have baby formula.”

Perry would not answer when asked if he would comply with the subpoena.

“This is all for headlines and sensationalism,” Perry told CNN. “The fact that they feel it to the press before they send it to the members is just proof it’s all about headlines. This whole thing is a charade.”

In its initial letter to McCarthy in January, the panel made clear it wanted to question him about his communications with former President Donald Trump, White House staff and others in the week after the January 6 attack, “particularly regarding President Trump’s state of mind at that time.”

The committee also wanted to understand how McCarthy’s public comments since the attack had changed from critical to in defense of Trump over time, and questioned whether Trump pressured him to change his tone when the pair met in late January 2021.

Since the panel’s letter to McCarthy, new audio revealed that in the days following the January 6 insurrection, the minority leader had considered asking Trump to resign. Audio has also exposed that McCarthy told Republican lawmakers on a private conference call that Trump had admitted bearing some responsibility for the deadly attack.

The panel first reached out to Jordan, one of Trump’s staunchest allies on Capitol Hill, in December to learn more about communications he had with Trump on January 6, and with Trump allies who were stationed in the Willard Hotel war room in the days up to the attack.

Jordan and Trump spoke on the phone in the morning of January 6, 2021, while Trump was in the White House residence, White House call records in the panel’s possession, first reported by CNN, showed. Since Jordan first acknowledged that he spoke to Trump that day, the Ohio Republican and Trump loyalist has waved off questions about it has been inconsistent in his answers.

Jordan has also previously been identified as one of the lawmakers who sent a text message to then-White House chief of staff Mark Meadows that the committee has in its possession. The message that Jordan forwarded to Meadows on January 5, 2021, outlined a legal theory that then-Vice President Mike Pence had the authority to stand in the way of the certification of the 2020 election.

Jordan was selected by McCarthy back in July to be one of five GOP members on the January 6 committee, but House Speaker Nancy Pelosi rejected McCarthy’s selection of Jordan, along with GOP Rep. Jim Banks of Indiana, because she said their appointments could impact the “integrity of the investigation.” Pelosi’s decision led McCarthy to pull all five of her members, which further soured the willingness between the two parties to work together, and led Pelosi to select GOP Reps. Liz Cheney of Wyoming and Adam Kinzinger of Illinois to serve on the panel.

Perry was the first lawmaker the committee sought voluntary cooperation from because of the key role he played in trying to help Trump undermine the 2020 election. Text messages obtained by CNN that came out after the panel’s initial letter, have filled in significant gaps about the role Perry played at almost every turn in scheduling to reverse or delay certification of the 2020 election.

Text messages selectively provided by Meadows to the committee, show that Perry was pushing to have the nation’s top intelligence official investigate baseless conspiracy theories and worked to replace the US acting attorney general with an acolyte willing to do Trump’s bidding.

“From an Intel friend: DNI needs to task NSA to immediately seize and begin looking for international comms related to Dominion,” Perry wrote to Meadows on November 12, 2020, just five days after the election was called by Joe Biden.

In the text, which had not been previously reported, Perry appeared to be urging Meadows to get John Ratcliffe, then-Director of National Intelligence, to order the National Security Agency to investigate debunked claims that Dominion voting machines were hacked by China.

A recent court filing also revealed how Perry played a key role in strategizing with Trump allies about throwing out electoral votes in states Trump lost.

“Mr. Perry is one that immediately jumps to mind as me recalling him physically being there and then pushing back,” Hutchinson said, describing how the Pennsylvania Republican clashed with Trump’s White House counsel over whether the plan for states to submit alternate slate of electors was legally sound.

A text from November 21, 2020, shows that Meadows even went through Perry in order to get in touch with local lawmakers in his state.

“Can you send me the number for the speaker and the leader of the PA Legislature. POTUS wants to chat with them,” Meadows wrote to Perry.

The texts also show that Perry acted as a conduit between Meadows and Justice Department attorney Jeffrey Clark, a relatively obscure official who emerged as a central figure in Trump’s election gambit after the former President nearly named him as acting attorney general days before the US Capitol riot .

The messages draw a direct link between Perry, Clark and the Trump White House-led effort to enlist the Justice Department to help overturn the election.

Last year, the Senate singled out Perry for his role in promoting Trump’s election fraud conspiracies.

Text messages in the panel’s possession reveal that Perry texted Meadows multiple times to request the conversation move to the encrypted messaging app Signal or to alert Meadows to a message he sent on the encrypted platform.

Such a move could put the exchange out of the committee’s reach because Signal does not collect or save user data, making it more difficult to provide that information to outside entities, including law enforcement and congressional investigators, even under subpoena.

The panel reached out to Biggs earlier this month to discuss his participation in planning meetings at the White House and remotely regarding “various aspects of planning for January 6th.”

When seeking Biggs’ voluntary cooperation, the committee said it wanted to understand “precisely” what he knew before the violence on January 6, “about the purposes, planning, and expectations for the march on the Capitol.”

Biggs was also communicating with Meadows about efforts to persuade state legislators that the 2020 election was stolen, and sought their help in trying to overturn the election, according to the communications in the committee’s possession.

Brooks caught the committee’s attention after he revealed that Trump had repeatedly asked him to work to rescind the 2020 election and remove Biden from office.

This story has been updated with additional developments Thursday.

CNN’s Melanie Zanona and Manu Raju contributed to this report.