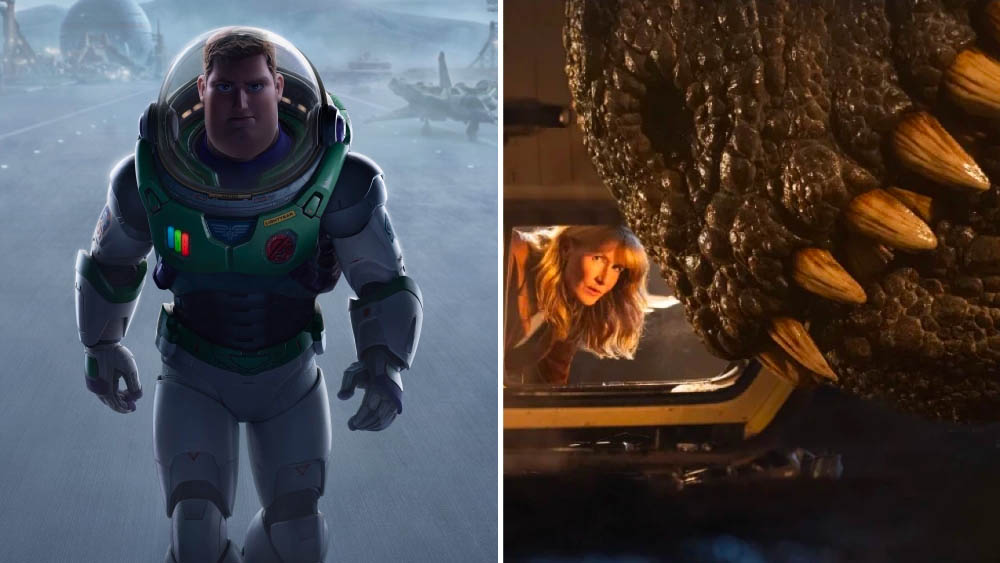 SATURDAY AM: Well, this wasn’t suppose to happen. Disney’s lightyear, despite an A- CinemaScore and 4 stars/85% positive on PostTrak, it’s coming in way under its $70M-$85M projection with a $51M-$55M 3-day weekend to Universal/Amblin’s second weekend of Jurassic World Dominion with $57.1M. Jurassic could even reach $66.3M through the four-day Juneteenth holiday.

What the hell happened here? Despite the lowest Rotten Tomatoes rating of the Toy Story franchise at 77% Certified Fresh, it’s clear no one in great quantity is going to see the origin story of Buzz Lightyear. Understand that a Pixar movie and a Jurassic movie have played in close proximity to each other on the calendar before, and they both walked away with an embarrassment of riches. While we’ve mentioned that spinoffs always open lower than the core franchise films (take your pick: Fantastic Beasts vs. Harry Potter, Hobbs & Shaw vs. Fast & Furious and Bumblebee vs. transformers), this could be a case of going to the Toy Story well too soon, too fast, despite the fact that theater closures and a pandemic stood between now and the last Toy Story 4 three years ago.

Like Universal with dominion, it’s not like Disney didn’t market Lightyear, and if you comb through the top critics on Rotten Tomatoes, a majority of them seemed to enjoy it.

It’s clear the majority of Toy Story fans are not out in abundance. Remember that movie is an ensemble pic in all its toy characters, an appealing factor for all the parents that grew up with those icons like slinky dog ​​and Mr. and Mrs. Potato Head. Also limiting audiences here with lightyear is that there’s not much for girls to hook their hats on; the outer space aspect makes this spinoff a big driver for boys, hence the turnout of more boys than girls.

Also, families in an inflation economy might be choosing their battles in a streaming laden marketplace: They’ll go see Jurassic on the big screen, which won’t be in the homes for a while, but might wait to see an nth Toy Story movie on Disney+.

While the box office economics on a $200M animated movie aren’t great from Disney’s POV, particularly in regards to the official and internal studio projections, and the Toy Story franchise itself, exhibition sees a different side of the coin after going through their own depression in 2020-21: $51M-$55M is a damn good opening. More reason for exhibitors to sing “We’re in The Money” from 42nd Street is the fact that the three day weekend is ringing up an estimated $161.1M, 18% ahead of the same weekend in 2019, the benchmark year for determining whether the domestic box office has returned to healthy levels.

K-12 schools are off at 95% on Monday, so well see if lightyear can find an extra set of jet fuel today through Monday.

Of those who turned out for Lightyear, 52% were men, 48% females. Sixty one percent of those who bought tickets were between 18-34. Men over 25 were dominant at 30% giving the film its best grade of 87% positive. Females under 25 at 24% also gave it 87%. Females over 25 repped 24% of the audience and graded the Pixar film with an 85%. Men under 25, up to 23%, gave the film at 79% grade. Diversity demos were 46% Caucasian, 28% Hispanic and Latino, 10% Black, and 11% Asian. lightyear‘s best territories were in the West and Southwest where eight of its top ten runs came from. Imax and PLF screens are contributing close to a quarter of the box office to date.

Throwing an extra monkey wrench into the Father’s Day weekend box office against the competition is the holdover power of Paramount’s Top Gun: Maverick, the ultimate movie to take your dad to. The movie is eyeing the glorious 4th weekend of $40M, -23%, for a total running of $462.1M; just $37.9M from a half billion stateside.

FRIDAY AFTERNOON: Friday is clearly in favor of Disney/Pixar’s lightyear with $23M, which includes the $5.2M previews. However, there’s some suspense from Universal/Amblin’s Jurassic World Dominion possibly sinking its teeth into the cartoon astronaut.

Current 3-day outlook for lightyear is $55M+ and Jurassic World Dominion is at $53.4M, but there’s a projection that the latter cold clear $61M over 4-days sending its running total to $253M.

Still too early to say lightyear is underperforming for Saturday matinees and Sunday Father’s Day business are its greatest strengths. At this early stage, we heard that hourlies are progressing better than Sonic the Hedgehog 2‘s during its first Friday in April. Should that momentum continue through the rest of this afternoon, then there’s a chance lightyear gets to $60M.

FRIDAY AM: Pixar’s return to the big screen, Lightyear, did $5.2M between fan Wednesday previews and Thursday night shows, which is just under the $6.3M that Paramount’s Sonic the Hedgehog 2 did back in April over its first two days of previews.

lightyear‘s Wednesday fan screenings started at 6PM, while Thursday showtimes began at 3PM. The sci-fi origin story of space ranger Buzz Lightyear is booked at 4,255 theaters and is expected to do between $70M-$85M. Global start is being eyed at $135M, with the overseas footprint being 43 material markets, representing 79% of international. Rotten Tomatoes reviews are at 80% certified fresh which is below the high 90%-100% range of the Toy Story movies. If the family film is going to overindex, it boils down to Father’s Day traffic, not to mention, the Juneteenth holiday being on Monday. To date during the pandemic, Paramount’s Sonic the Hedgehog 2 owns the best opening for a family movie at $72.1M.

lightyear is well ahead of the Tuesday pre-holiday previews of Universal/Illumination’s single 2 ($1.6M) and Disney’s Charm ($1.5M). Presales for lightyear were estimated to be around $10M as of yesterday, just under Sonic the Hedgehog 2‘s $12M-$14M.

Universal/Amblin’s Jurassic World Dominion led all movies in regular release yesterday with $8.66M, -13% from Wednesday at 4,676. The movie will share Imax screens with lightyear this weekend, but cedes them in its third weekend fully to the Disney/Pixar film. First week’s take for dominion is $191.1M, 7% behind the first week of Jurassic World: Fallen Kingdom.

Disney/Marvel’s Doctor Strange in the Multiverse of Madness did an estimated $614K, for a $7.9M sixth week and $400.8M running total.