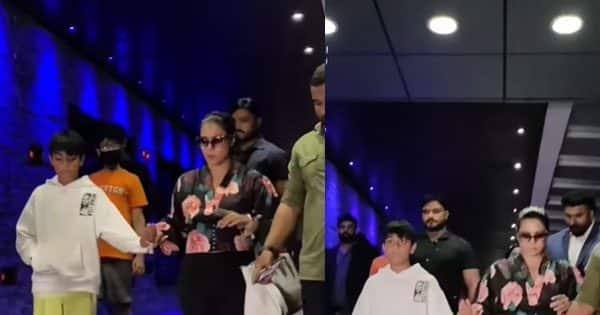 Kajol was spotted by the shutterbugs during dinner at a popular eatery in Mumbai along with their son Yug, where the actress was seen wearing a sunglass at night time as she was making her way to the car. While many celebrities wear sunglasses even at night time and they often get trolled for the same. While Kajol who was wearing sunglasses was questioned about why she is wearing Kala Chashma at night time and many claimed that if she will remove those shades she will be caught. Also Read – Shah Rukh Khan-Aryan to Kajol-Nysa Devgn: These 9 star kids are a spitting image of their parents; here’s proof

The netizens take a dig at the actress and claim that she might be high and will get caught and this is the reason she’t removed her sunglasses. Watch the video of Kajol right here.

Kajol is one of those celebrities who don’t like to get clicked and papped by the shutterbugs during her time and this is the reason she never poses while she is with her family. Just a few days ago Kajol was spotted at the airport and she joked about paparazzi fitness and asked them to walk faster along with her and was trolled for her dressing choice. Many such why does she choose bizarre outfits. While many said that she should take fashion cues from her daughter as she is a fashion diva. Nysa Devgn often leaves her admirers stunned with her fashion outings. Also Read – Worst dressed celebs of the week: Uorfi Javed, Kajol, Sara Ali Khan and more — These hotties failed to slay in style

On the professional front, Kajol was last seen in Tanhaji along with hubby Ajay Devgn. The film was a massive success at the box office and everyone love the chemistry between this golden couple of Bollywood. Kajol has been one of the most successful actresses of her time, her pairing with superstar Shah Rukh Khan is the most loved Jodi among the fans even now. Also Read – Trending Entertainment News Today: Ranbir Kapoor-Alia Bhatt’s Brahmastra opens to mixed reviews; Honey Singh pays Rs 1 crore alimony to ex wife and more