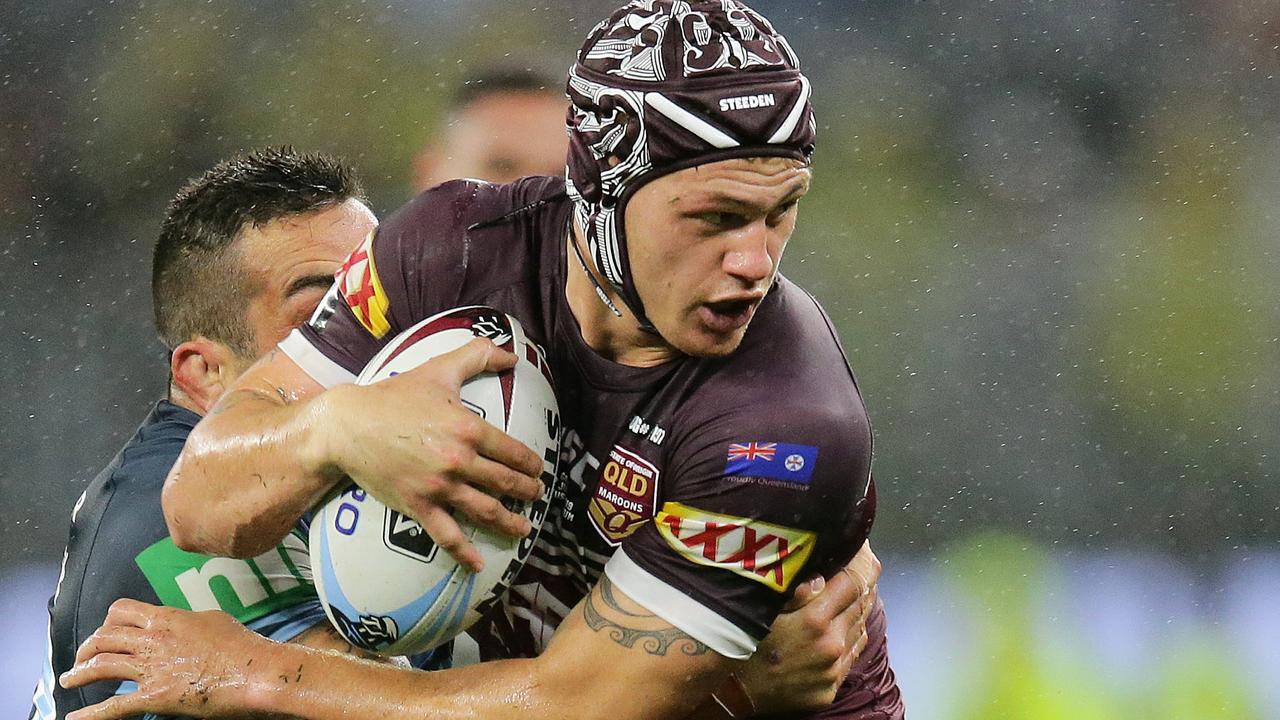 Kalyn Ponga and Reece Walsh are the last men standing for the Maroons’ fullback jersey but the Knights captain looks the favorite to snare it.

A knee injury to NSW Blues hopeful Daniel Saifiti soured Newcastle’s 24-16 win over the Warriors with the class of Kalyn Ponga and Anthony Milford proving decisive.

Saifiti suffered a suspected grade one or two medial ligament injury. If confirmed, he will be out of the opening State of Origin clash with NSW coach Brad Fittler set to name the side on Sunday.

Basic errors from both sides kept the clash close but in the end it was the smarts of Ponga and Milford in the second stanza that broke the game open and earned the Knights their second win in the last 10 games.

Knights halfback Jake Clifford put one on the toe for a charging Tyson Frizell to score and Ponga chimed in beautifully with Milford to get Edrick Lee over and level it up 12-all at the break.

Ponga, who put his stamp on the Maroons number one jersey over Warriors teenager Reece Walsh, laid on a slick move from the scrumbase to send Enari Tuala over to get the Knights into the lead in the second half.

Ponga’s three line break assists and two try assists would have pleased Maroons coach Billy Slater in the end. Walsh was willing and heavily involved in the Warriors first two tries, but Ponga did enough to get the nod for Queensland.

“For anyone that gets to wear the Maroons jersey, it is special. It is an honor,” Ponga said.

“If it is me I am very fortunate. If it is (Walsh), what an honor. I hope I get picked for Origin. I love being in that camp.”

Knights coach Adam O’Brien explained how committed to the cause his skipper is.

“(Ponga) won’t tell you but all week he was crook (with flu) and stayed away from the club. He did five minutes of yesterday’s captain’s run and woke up this morning and said ‘I am ready to go’,” he said.

“You can’t ask for much more so he’s sure to wear that Maroons jersey.”

Marcelo Montoya collected Dominic Young high and was binned in the second half before Jazz Tevaga and Murchie clashed heads and both left the field with HIAs.

It was the last thing the Warriors needed after a week from hell which included the sudden exit of prop Matt Lodge.

“When you recruit a player and it doesn’t work out it’s no one’s fault but the head coach’s,” Warriors coach Nathan Brown said.

“I brought Lodgey to the club and it didn’t work out so that’s on me, not anyone else. I take full responsibility for that situation.”

Half Shaun Johnson was outplayed by his opposite Clifford and was unable to find his mojo as the Warriors crashed to their fourth straight loss.

The NSW brains trust wanted Saifiti to fire up and give them a compelling reason to select him in the Blues team for the opening State of Origin clash, but injury ruined those hopes. In the opening 23 minutes he had just one run for seven meters before injuring his right knee which was already heavily strapped. The 26-year-old has been one of the first picked in the past three Origin series but has been below his best his this season. Saifiti’s knee seemed to be hampering him before he re-aggravated it.

“(Saifiti) is in a leg brace and they are thinking MCL,” O’Brien said.

Anthony Milford’s best attacking form for the Knights is ahead of him but he showcased real defensive clout in his second game back from a lengthy suspension. One bell-ringer on Jack Murchie jolted the ball free and led to a try and another on Walsh was a cracker. Milford’s attack down the left side looked promising on several occasions and he showcased his class with a deft kick for Tuala’s second try.

“(Milford) was in everything. His talk and experience for this team is massive,” Ponga said.

“I think he was solid for us last week. This week he was pretty special with the ball. For me it is just about learning off him and building that combination.”

Stuart rejoices at opportunity for Fogarty

Ricky Stuart has heaped praise on star recruit Jamal Fogarty who was handed his Raiders jersey by his wife in an emotional presentation ahead of his return from injury against the Eels.