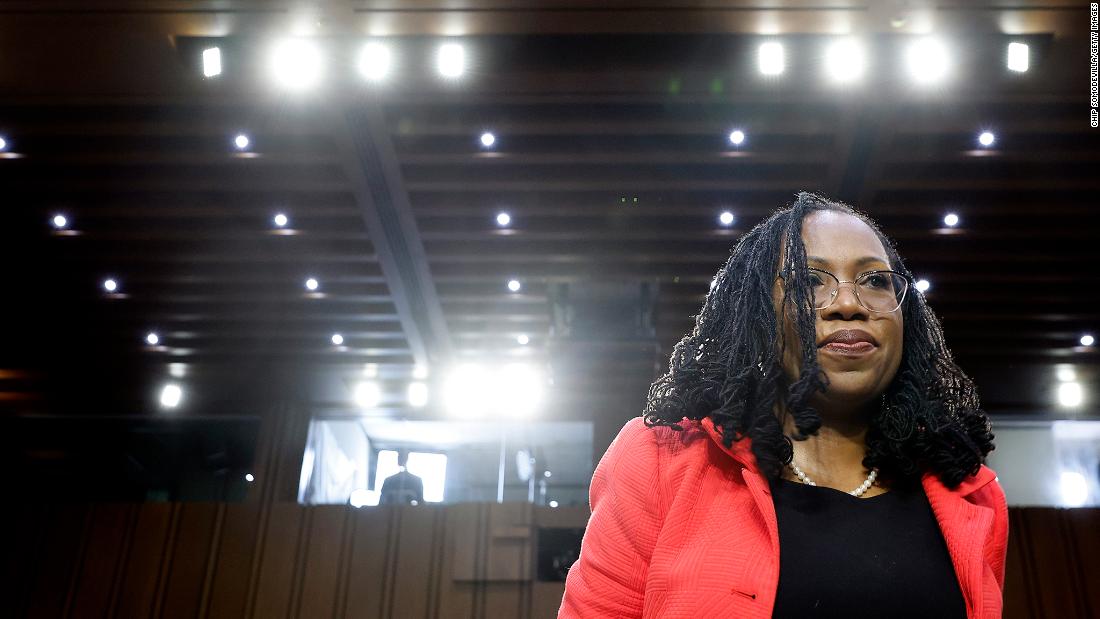 The Senate Judiciary Committee is expected to vote on party lines — 11-11 — barring any unforeseen circumstances, but there are ways, in which, the panel or the Senate Democrats in power can still put her nomination to a confirmation vote in the days to eat. If confirmed, Jackson will be the first Black woman to be a Supreme Court justice.

Senate Republican and Democratic leaders agree that Jackson is a well-qualified nominee, but almost all GOP senators are expected to oppose her. Jackson, 51, sits on DC’s federal appellate court and had been considered the front-runner for the vacancy since Justice Stephen Breyer announced his retirement. Jackson previously worked as a clerk for Breyer, a federal public defender, an attorney in private practice, a federal district court judge and a member of the US Sentencing Commission.

“Justice Jackson will bring to the Supreme Court, the highest level of skill, integrity, civility and grace,” said Illinois Democratic Sen. Dick Durbin, the Judiciary Committee chairman, in explaining his support for her on Monday. “This committee’s action today is nothing less than making history. I’m honored to be part of it.”

Iowa Sen. Chuck Grassley, the top Republican on the Judiciary Committee, said he was alarmed by her methodology dela in evaluating cases related to a criminal justice bill and she was too lenient in approaching criminal law and sentencing.

“We need confidence that judges will interpret the law as they’re written,” Grassley said.

One potential Republican vote for Jackson was South Carolina Sen. Lindsey Graham who supported Jackson a year ago for her current job. But he said last week that he would oppose her, citing her sentencing for cases of child pornography and representation of detainees at Guantanamo Bay.

Graham, a member of the Judiciary Committee, said that while Jackson exhibits “exceptionally good character,” she was too lenient in sentencing those cases and had an “activist zeal” in calling former President George W. Bush and former Defense Secretary Donald Rumsfeld war criminals in legal briefs as she advocated for a detainee.

“My decision is based upon her record of judicial activism, flawed sentencing methodology regarding child pornography cases and a belief Judge Jackson will not be deterred by the plain meaning of the law when it comes to liberal causes,” said Graham.

LIVE UPDATES: Senate committee to vote on Ketanji Brown Jackson’s nomination
An in-depth CNN review of the child pornography cases showed that Jackson had mostly followed common judicial sentencing practices. It has become a norm among judges to issue sentences below the guidelines in such cases that don’t involve producing the pornography itself. As for her advocacy for Guantanamo detainees, Jackson that they had been tortured and subjected to other inhumane treatment but did not explicitly use the phrase “war criminal.” Jackson’s four detainee clients were not convicted and were eventually released from Guantanamo.

Durbin refuted Graham on both issues on the Senate floor last week, calling Jackson “in the mainstream of sentencing” of child pornography cases and saying Republicans have also voted for President Donald Trump’s judges who “do exactly the same thing she does.” He said it was a “gross exaggeration and unfair on its face” to say that Jackson had called Bush administration officials “war criminals.”

It’s rare for the Senate Judiciary Committee to tie on a Supreme Court nomination. But nomination battles have become increasingly contentious, and the current Senate is split 50-50, so there are an even number of Democrats and Republicans on the panel, rather than the majority party holding more seats.

In 1987, Democrats who controlled the committee voted to unfavorably recommend President Ronald Reagan’s nominee Robert Bork on ideological grounds. And in 2020, Democrats boycotted a committee vote on Barrett, arguing that the chamber should not consider President Donald Trump’s lifetime appointment to the Court while the country was voting in the presidential election.

In the Trump era, Senate Republicans strengthened the conservatives’ grip on the court from 5-4 to 6-3, after holding up President Barack Obama’s nominee Merrick Garland during another election year — 2016 — and then confirming Gorsuch in 2017, and Coney Barrett in 2020 to replace the late Ginsburg. Jackson’s confirmation would likely replace a liberal — Breyer — with another.

“I think all indications are that Judge Jackson is going to be a liberal activist from the bench,” said Senate GOP Leader Mitch McConnell on Fox last week. “But the good news for people like me, is the Court is still 6-3.”

“We made massive changes over the last four years that I think put the Court in a very solid position with a great number of judges who believe in the quaint notion that maybe a judge ought to follow the law,” he added.

This story has been updated with additional developments Monday.

CNN’s Tierney Sneed and Daniel Dale contributed to this report.