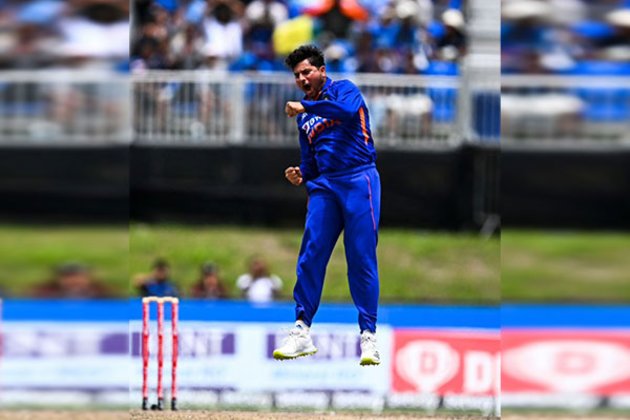 Chennai (Tamil Nadu) [India]September 25 (ANI): Star spinner Kuldeep Yadav bagged a hattrick against New Zealand A on Sunday and all thanks to his amazing game, India-A bundled out the Kiwis for just 219 runs.

First, he got Logan van Beek out caught by Prithvi Shaw on the fourth ball. Then on the next ball, Kuldeep also walked Joe Walker. Walker’s catch was caught by captain Sanju Samson. On the last ball, Kuldeep completed a hat-trick by lbw to Jacob Duffy. Kuldeep took four wickets for 51 runs in 10 overs.

Even though Yadav gave his best performance against New Zealand A but the ‘Chinaman’ did not get a place in India’s T20 World Cup squad.

The ‘Chinaman’ has taken 182 wickets in seven Tests, 69 ODIs and 26 T20Is for India. He played the last match for India on the Zimbabwe tour.

The spinner has taken a hat-trick twice in One Day Internationals. In the year 2017, Kuldeep bagged a hat-trick against Australia in Kolkata. After this, in 2019, he achieved this feat against West Indies as well. (ANI)