Lea Michele has taken the opportunity to address rumors she is illiterate in her latest TikTok video.

The funny girl actress posted her second-ever video to the platform, lip-syncing along to viral audio from a distressed Kim Kardashian that says “Hey … it’s amazing, but wait can you talk for a sec?”

“Calling Jonathan to read me the comments on my first TikTok,” Michele wrote in the text overlaying the video, referring to her friend and longtime collaborator Jonathan Groff.

She simply captioned the TikTok, “lol 😉🤪😌”. Watch the video above.

Many were surprised at the actress’ take, saying “SHE’S SELF AWARE!” and “SHES ONTO US!”

“LEA THIS IS WHAT THE PEOPLE WANTED THANK YOU!!!!” said another.

“He probably typed this out too…so cute!!!” wrote another, leaning into Michele’s joke.﻿

“While I always maintained leaning into the joke was the way to go, I truly didn’t think you’d do it. Better late than never, well played Lea!” wrote one encouraging commenter.

READ MORE: Chrissy Teigen responds to trolls after news of her ‘life-saving abortion’﻿

Michele’s latest role is shrouded in controversy after rumors she “strong-armed” her way into funny girlkicking out the previous star, Beanie Feldstein﻿.

After a slew of bad reviews, Feldstein announced she ﻿would be leaving the role of Fanny Brice prematurely.

With no context as to how Michele was cast, the internet ran wild with theories that she forced her way into the role, especially since her bullying and racism rumors on the set of glee, corroborated by her former co-stars.

Another former co-star of Michele’s, fitness guru and Broadway star Craig Ramsay, slammed Michele after working with her on a production of Fiddler on the Roof.

“As far as Lea Michele is concerned, I think she is one of the most entitled people I have ever come across in this business!,” he said in a podcast interview on David Yontef’s Behind the Velvet Rope.

“I was there when she got the call of, ‘I got glee,’ and I think the entitlement just came over her body. She was possessed with this and from that moment on – cause she moved to LA the same moment I did from New York – and I cared for her greatly, but the amount of entitlement… I have never seen the likes of it, especially Broadways.

“You can’t mess with Broadway. You can get a reputation very quick if you don’t respect where you come from.” 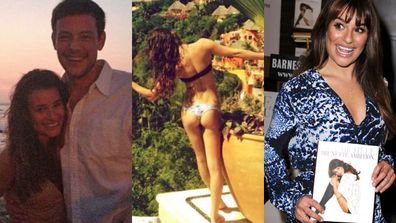